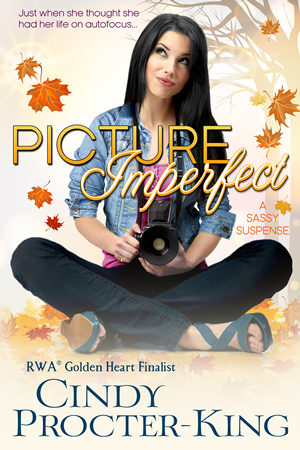 Ursula placed an order with the food vendor. As the man set down two steaming cups of apple cider with cinnamon sticks for stirring, she caught sight of Gabe wandering toward the cart, tucking his phone into his coat.

He picked up the cups. “Smells good. Thanks.”

“You’re welcome. I hope you like hot cider. It’s locally made.”

“Any warm beverage on a fall day is ideal.”

Gabe pointed to the hood hanging down the back of his jacket. “I have an instant umbrella this time.”

Another compliment. A girl could grow accustomed to his gallantry.

She collected the bag of warm, soft pretzels and, side by side, they strolled in companionable silence to the slatted bench. Gabe’s limp had improved since he’d walloped Lance, thank goodness.

They sat, Gabe on her right, his hurt leg extended in front of him, heel balanced on the grass. Preschoolers played on a jungle gym while moms and nannies chatted and supervised. A couple of seagulls squawked at the base of a trashcan.

“Here you go.” Gabe passed her a hot cup of cider.

She set down the drink with a quick thanks before opening the vendor bag. She’d ordered two varieties of homemade pretzels, and the contrasting scents of cinnamon-sugared dough and spicy mustard glaze drifted from the sack. Her mouth watered.

“What did your physical therapist say?” she asked Gabe.

“Like I figured, I’m to ice the muscle tonight and take ibuprofen. I just saw her yesterday. Because I was so touched by your concern, she’s also fitting me in late this afternoon.”

He was only teasing, but butterflies scattered inside her tummy. “That’s a relief. I’m glad you checked.”

His shoulder bumped hers. “Anything for you, boss.”

Tingles shot everywhere. He was so sexy. So incredibly tempting.

“Salty or sweet?” She held up the pretzel bag. “I bought two of each. It’s not much, but we can stop again after Norm’s session, if you’re hungry.”

“I’ll be okay. Lemme see.” Peering into the bag, he lifted out paper napkins and arranged one on her thigh. Her skin sizzled. “You’re sweet, so I must be salty,” he said, selecting a giant pretzel with chunky sea salt topping the beer-mustard glaze. “Smells incredible.” He ripped off a big piece, chewed, and swallowed. “Tastes amazing.” Eyes crinkling, he sipped his cider.

Ursula’s butterflies fluttered and soared. She bit into her cinnamon-sugar-sprinkled pretzel. “How’s your leg?”

“Indulge me.” The folded pretzel bag rested on her lap, her snack on top. She picked up her cider and stirred the hot liquid. The cinnamon stick accentuated the cozy autumn notes of the aromatic drink.

Interpreting his alpha-speak, the incident in the gym had damaged his injured leg more than he wanted her to know.

Not a surprise. He’d planted his leg hard on the court floor.

“I’m sorry.” She sipped her cider. “Lance deliberately tried to rile you, dribbling his dumb basketball between his legs like he wanted to challenge you to a wrestling match or something.”

Gabe ate his pretzel. “You don’t have to be sorry.”

“I was in charge. I should have told him to check his ego at the door.” She nibbled her tasty snack, the cinnamon spicy on her tongue. “Aren’t you concerned he’ll press charges?”

“He wouldn’t dare. His wife might learn why I shoved him. He’s a jackass. I couldn’t twiddle my thumbs while he disrespected you.”

“Nothing I care to repeat. Verbal leers.”

“Well, I’m not interested.” In married men like Lance. Against her better judgment, Gabe was increasingly becoming another matter. Would he have responded to Lance’s taunts if he weren’t interested in her? “Thank you for defending my honor, as you put it.”

Laughing, she raised her cider for another sip. Being an idiot or defending your honor, he had said at the gym. Take your pick.

“You’re one of the nicest guys I’ve ever met.” A thousand butterflies tumbled around inside her.

“To all the boys? Nope.” And she shouldn’t have confessed the same to Gabe. She possessed minimal self-control around this man. Was it any wonder? He might be a good-time guy, but he’d stood up to Lance without her asking. He’d volunteered for the magazine shoot to learn photography, and she was benefiting in countless ways. Without his help, her schedule over the next several days would be insane. He tolerated Mackie’s eccentricities with more patience than she could possibly wrangle.

Like her, Gabe had suffered loss. While discussing the Clarion ad at her apartment last Wednesday, she’d bluntly inquired about his father only to discover the man had passed away “a long time ago.”

When Gabe was a little boy? A teenager?

Upon blurting the question, she’d realized her rudeness. But he hadn’t called her on it. As if wanting to spare her embarrassment, he’d stated the facts and moved forward.

She set her cup beside her hip again. Gabe genuinely cared about people. Whatever he chose to do, she couldn’t picture him not helping others.

Just when she thought she had her life on autofocus…

Photographer Ursula Scott is six short months from buying her boss’s studio and helping her family knock down a massive debt. She can put up with his hairball antics for that long, right?

But, oh, he makes life difficult. She can barely restrain herself when he hogs credit for her assignments, and now half-naked weirdos are responding to his ad for her first magazine photo spread. On top of that, someone is sabotaging the studio. Worse, she discovers her sexy apprentice is a former cop practicing his newbie PI skills on the case—and she’s a suspect!

Suddenly, Ursula’s dreams and hard work seem about to go up in smoke. In more ways than one.

Well, not on her watch.

When Gabe McKenzie moves home following the shooting that kyboshed his career, he doesn’t expect to get sucked into finding the culprit wreaking havoc at his uncle’s photography studio. He certainly doesn’t expect to fall for Ursula Scott, a long-legged brunette with a definite motive and a desire to play Nancy Drew. Even as he clears her, the sabotage escalates into a bizarre stalking, placing Ursula…and Gabe’s hopes for their future…in danger.

If only he can convince her to stop snooping around and let him do his job as a PI, before an unknown menace threatens not only her dreams—but her life.

One response to “Sunday Snippet: Picture Imperfect: A Sassy Suspense by Cindy Procter-King”