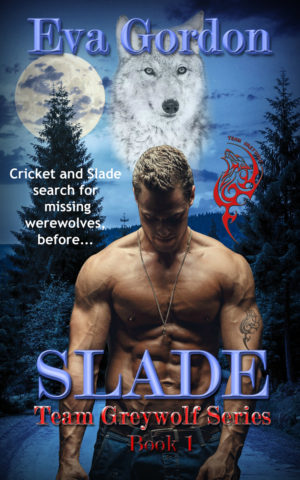 Before Warner shot him with the tranquilizer, Slade grabbed the doctor and threw him into the chamber. Warner hit the wall with a loud thud. He whimpered and cowered in the corner, no doubt fearing his patient would rip his throat out if he moved.

I won’t say I told you so. Cricket’s hackles rose, her fangs extended and she growled, but waited for Rylee’s orders.

Rylee stepped closer to him. “Stand down, Prince Slade.” Her claws extended.

With manic strength, Slade grabbed Rylee by the shoulders and shoved her into the chamber with Warner, then slammed the door shut.

Cricket dove for the dart gun and shot him in the arm. In a flash, he lunged at her, and she landed on her back with a thud, the wind knocked out of her lungs. Oof. Stunned as if knocked down by a charging rhino, she dropped the weapon. Out of her reach. Mad Prince Slade held her down. Each of his massive hands shackled her wrists.

Fuck. Cricket twisted and kicked, but the hulky man trapped her as if a granite statue had fallen on her. She growled. Not smart. She should whimper like a cub, but not at the cost of her pride.

Rylee banged against the glass. “Harm her and you’re dead.”

Slade held Cricket down and studied her. “How did you survive the change when many alphas do not?”

Prince Slade’s green eyes penetrated her. His strong alpha mind compelled her to obey and answer.

Cricket fought against his alpha mind control. How dare he intimidate her? Still, physically and politically the alpha maintained all-encompassing superiority. She gulped. “To be honest, I was too stubborn to die.”

“Even now, as I hold you down, you do not surrender to death?”

“No.” She closed her eyes, awaiting his lethal bite.

Slade released her, and moved away. He sat on the chair and pressed his hand over his forehead. “Let them out. I’ll try to cooperate, while my wolf is calm.”

Cricket leapt up and opened the door.

Cricket looked back at the prince. He covered his large hands over his face as if despondent. His sadness touched her heart. “Sir, do you mind stepping back into the chamber?”

Slade nodded and stood, towering over her. He turned and walked back in.

Cricket couldn’t believe it. No werewolf had ever obeyed her like that. Was it the sedative?

Rylee locked the door and shot her a smile. “Good job.”

Rylee winked at her.

She tilted her head to the side. Unbelievable. Rylee knew all along if she let him out of his cell, he wouldn’t harm her. Cricket wished she had as much faith.

Dr. Warner released a long breath. “Prince Slade, do you accept Cricket as your pack subordinate until you are well enough to rejoin pack society?”

I should remind him, it’s assistant not subordinate. Cricket opened her mouth to protest, but Rylee narrowed her eyes at her.

“Yes.” Slade stared at Cricket as if she had any say. “However, I prefer my guest quarters.”

Rylee spoke, “Just know, if we comply with your wish, we have to sedate you. Your wolf may not be as cooperative.”

Cricket lifted her brows. “I guess the dart wasn’t strong enough to knock him out?”

Dr. Warner shook his head. “Not even close.”

“Very well. As long as only Cricket sedates me,” said Slade.

Warner handed her a thick syringe. “This will do the job.”

Cricket snorted. “At least what I gave him calmed him enough.” Or drugged enough to listen to a runt.

“Not quite,” said Warner.

“Nothing calms a wolf suffering from morphopsychosis or a better term, morphogenesis, more than being around the lowest ranked wolf.”

Well, how convenient. The entire scene had been a test. Lucky for me they were right.

Rylee smiled. “Don’t take it personally. Think of it as just another mission.”

Ouch. It was hard not to. They had used her. Counting on her inferior runt status being an advantage. Wasting her talent, babysitting. Rude. The team needed her. “Ma’am, I…”

Rylee growled at her.

She entered the chamber and approached the beast of a man, doing her best to act the submissive wolf, but her tight lips telegraphed how she felt. Hate being here, your royal high ass-ness.

Slade narrowed his eyes at the attractive runt as she stepped closer, holding the powerful sedative in her small delicate hands. He sniffed her. Her alluring scent reminded him of the sweet bloom of a rare wild rose growing on a bare mountain despite the harsh weather. As a cub, he remembered a runt born to a beta couple. The poor thing didn’t survive the winter. Not that he wasn’t loved, cared for and protected, but apparently he had weak lungs and died of a virus. Slade’s mother had told him it was better the runt had not lasted. The change would have killed him anyway. He cocked his head. Yet, somehow, this fragile female runt named after an insect survived into adulthood and the change. Most intriguing.

Blasted Dr. Warner. He was right. Being around a weaker wolf brought out his protective nature and worse, made him feel calm, as if he needed to reassure her she’d be safe with him. Not that his sorrow had vanished, but her presence took the edge from his fierce wolf. Almost kept him human. Fucking frustrating. “Go on. Do it.”

Cricket didn’t cower, like a submissive wolf should, but frowned. “I need your exposed arm.”

Stubborn and fearless. No wonder she survived the change. He dropped his robe and flexed his bicep.

Cricket stared at her feet. He smelled her arousal. She was petite, delicate, almost human, not the type of female he dated. Besides, no one ever had sex with a runt, even for fun. Still, something about her enchanted him. No doubt, part of his mental breakdown.

She cleared her voice. “If you don’t mind sitting.”

The feel of her hand on his taut skin comforted him. So soothing. He gazed at his personal submissive.

The sudden sting of the needle hurt like hell. “Blast!” He growled.

Slade noted the suppression of a smile on her perky kissable lips. Her manners, defiant. Rude. He meant to stand and force her to bow, but blackness ensued.