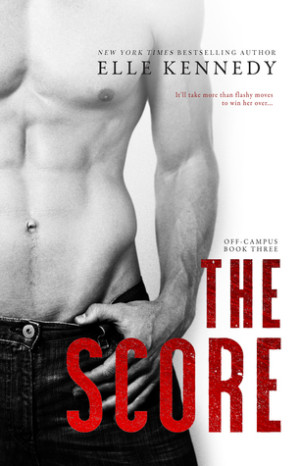 Allie Hayes has had it with her on-again-off-again boyfriend, Sean, and finally breaks it off for good. With her past behavior of giving into Sean’s apologies, she turns to best friend Hannah for help staying away from Sean that first weekend. Unfortunately, Hannah is out of town with her boyfriend, but they insist she hideout at Garrett’s house with his roommates.

Hockey stud and all-around player Dean Di-Laurentis knows his best friend’s girlfriend’s best friend Allie is off limits when she shows up looking for a place to hide from the temptation of getting back together with her ex. But isn’t rebound sex the best thing for getting over an ex? However, now that he’s been with Allie, he can’t shake her out of his system.

Having absolutely loved the first two books in Ms. Kennedy’s Off-Campus series, I was chomping at the bit waiting for The Score to finally make it to Audible. Although she changed her narrator for this one, overall, the wait was worth it. Ms. Kennedy has a knack for telling humorous, heartfelt stories that make me both laugh and cry.

Allie and Dean are well matched. They are both so passionate, and with the freedom of labeling their relationship a fling, they explore each other in open and honest ways. However, they keep the fling a secret, which leads to some hilarious moments, and it places pressure on the pair which I feel helps the relationship in the long run. And while there is a lot of exploration, the pair grows close because of a developing friendship which bolsters each other in surprising ways.

While there were times that the overall story was a little predictable, I didn’t care. I was so wrapped up in Dean and Allie’s story that I just listened and enjoyed. I laughed out loud and I got teary eyed. It’s just fun, high-quality storytelling. And I appreciate that the book is really about two young people trying to figure out who they want to be, and be okay with the fact it may not be what they were planning all along.

I was disappointed that Lorelei Avalon was replaced as the sole narrator for the series. Savannah Peachwood & Andrew Eiden hold their own and do a respectable job, but Ms. Avalon was amazing. Overall, the narration was okay. Mr. Eiden’s performance was the better of the two; his voice for Dean was solid. All of his characters, both male and female, were pretty good and he had a great Boston accent for Dean. On the contrary, Ms. Peachwood was just okay, with some voices that really irritated me. She sounds so much like a narrator of a middle grade series my daughter and I listened to, which added to my annoyance. I felt overall, her voice had a whiny quality that was too young for the characters. And don’t get me started on her voice for Dean’s sister, Summer!

Overall, I love the Off-Campus series, The Score included. Dean was seriously laugh out loud funny at times. What drew Allie and Dean apart was not at all what I expected, in fact, it was wholly unexpected. I really liked Allie and Dean together. I liked the progression of their love from sex to friends to more. It was honest and beautiful. There is a bomb dropped at the end of the book, which will lead into the next installment. I’ve come to really enjoy this group of Briar students and hope that Ms. Kennedy will continue on past these four hockey players.

One response to “Listen Up! #Audiobook Review: The Score by Elle Kennedy”