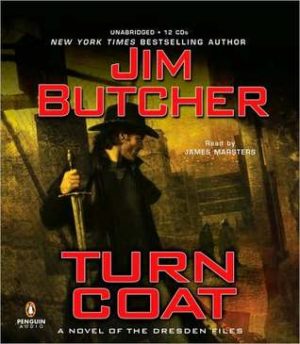 When long time nemesis Morgan shows up near death at his door, Harry makes the hard decision to help Morgan, potentially further damaging his reputation with the White Council. Along with protecting Morgan, Harry must deal with a deadly skinwalker,  the White Court Vampires, and a traitor among his own kind. For several books now, Harry has been slowly unraveling the mysteries of these unknown threats, and Turn Coat brings his poking around to a head. With so much taking place within the pages of this title, I strongly urge anyone new to the series to start at the beginning. The Dresden Files should NOT be read out of order.

Turn Coat has the feel of a transition story, taking listeners (readers) from point A to point B without much change. Harry’s search for the unidentified “black council” members and its nefarious purpose has gone on for sometime without any real progress. While there is quite a bit of forward momentum with this story arc, bringing Harry closer to the truth, there isn’t any conclusion by the end of the book, leaving me scratching my head and yearning for more. It was an exciting, enjoyable, yet sometimes confusing ride, but in the end, I hadn’t gone all that far.

With that said, a LOT happens around and to Harry in Turn Coat. By the end of the book, I was left with more questions than answers. Different factions and storylines, which have always been somewhat separate in each of the Dresden Files books, are starting to crossover and blur. It feels like each little action in Turn Coat is building and snowballing, and soon everything will explode.

What does make this an extremely enjoyable tale is the depth of emotion and changing relationships within the chaos of the actions. Harry’s relationship with his commander and lover, Ana, is brought under a harsh light, making Harry question himself and his actions. Second, Harry’s relationship with apprentice Molly is evolving as she tries to learn and grow. With the constant threat of death hanging over the pair if Molly crosses the line, I fear every action Molly makes will be for the wrong reasons. Then there is the oddity of Harry and Morgan, which brings about some heartfelt moments in the story, leaving me emotionally drained. Finally, Harry and Thomas must cross a few huge hurdles by the end of Turn Coat, and I was most certainly saddened by some of the outcomes. Harry’s growing personal connections to those around him are what made Turn Coat worthy of an “A” rating, regardless of the overall storyline progression.

Once again, Mr. Marsters nails every voice, sigh, breath… He personifies Harry Dresden in such a way that I feel I am inside Harry’s mind and soul. Every character is unique and identifiable, whether male or female, human or other. At one point, he slipped into a cockney London accent, and I heard echoes of Spike (from Buffy the Vampire Slayer), which made me grin. The combination of Marsters’ performance and the riveting emotional story, makes Turn Coat one of the best in the series.

While Turn Coat is definitely setting the stage for something big (next book is titled Changes after all), it is an excellent story in its own right. You see Harry stretch beyond his own comfort zone again, but this time his actions or inactions could start a civil war within the White Council. Watching him work with Morgan and deal with the obstacles tossed his way was both entertaining and thought provoking. And although it was probably meant to end on an upbeat note, I can’t help but feel a bit sad for Harry and all those impacted in this one.

Story: A-
Narration: A

One response to “Listen Up! #Audiobook Review: Turn Coat by Jim Butcher”