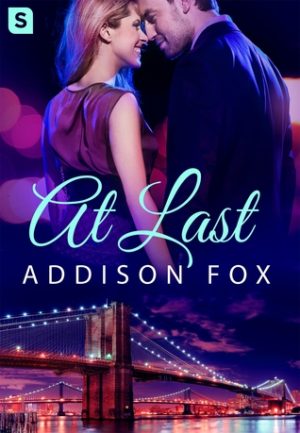 Addison Fox has become a reliable Go-To author for me.  Her writing is intelligent and satisfying.  At Last marks the beginning of a new series, The Brooklyn Brotherhood.  Three boys, Nick, Fender, and Landon were in the foster care system when Louisa Mills adopted them.  They saved her from a rock bottom moment, and she saved them bleak futures.  Even though the boys are grown now, each carries the baggage of rough beginnings.

At Last is Nick’s story as he faces down some of that baggage while he tries to make a significant advance in his life.  Emma Vandenburg Bradley is intimately intertwined in that process and is facing down some demons of her own.  Emma and Nick were lab partners in high school and are now forced to work together again.  Now every move they make carries a lot more weight than a letter grade.

Fox is, like her name, clever. I appreciate clever.  One of my favorite lines regarded an observation Nick made of his brother Landon, a video game designer.  Nick noted, “Nothing ruffled Landon.  In the zombie apocalypse that was life, Landon just knew how to get by, his brains intact.” I’ve found over the course of several books I’ve read by Fox, she is an observant writer and interesting insights are voiced by her characters. This is part of what makes her a reliably good writer.

Because At Last sets up the rest of the series, there are at least two other storylines that are inserted, a little oddly, mid-novel. The overlap didn’t necessarily add a whole lot to Nick and Emma’s story arc, but will provide a starting place for those books still to come.  I’m looking forward to all of them.

Welcome to Park Heights, Brooklyn where three brothers discover the meaning of family, and taking a chance on love.

After a year of turmoil, Emma Vandenburg Bradley returned home to Park Heights to run her family’s business – a Brooklyn institution – Unity brewery. Still trying to get her feet back under her, she definitely doesn’t want to be on the spectacularly bad date that ends with getting caught in a bar fight and her high school crush coming to her rescue.

Nick Kelley’s career in the NFL was cut short, but now he has a successful bar in Brooklyn and his dream of buying the Unity brewery is about to come true. Until he realizes that the mystery woman he saved – and shared a steamy kiss with – is none other than his high school chemistry partner, Emma…who happens to be a part owner of Unity. And she’s not interested in selling her family’s legacy.

When Emma and Nick find themselves on opposing sides, both are willing to do anything to win. But as their connection grows deeper, they become torn: Can they choose between their love for Unity and their plans for the future – and for each other?

One response to “Review: At Last by Addison Fox”