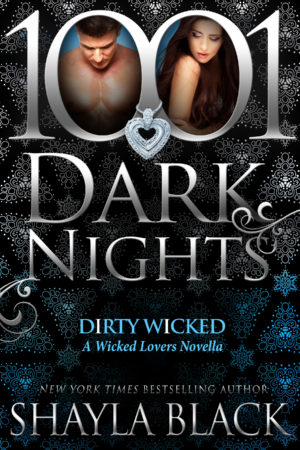 Set up and sent to jail for a violent crime he didn’t commit, Nick Navarro is determined to take vengeance on the corrupt district attorney who framed him and killed his best friend, Mike Porter. Sasha Porter holds the key to putting away Clifford for good. Now if Nick can keep his desperate need for his best friend’s widow, Nick and Sasha may yet survive the ordeal.

Dirty Wicked is a quick and danger-filled love story. Clifford is a evil, corrupt soul, who will stop at nothing to see Nick, Sasha, and her three-year-old daughter, Hannah, dead. I like that he’s not a good man in any way, making him a easy character to loathe.  Additionally, being on the run adds an element of suspense to the story, which in turn allows the author the freedom to create intense feelings between the couple, regardless of how little they know of one another.

While Ms. Black won me over with her ability to create strong emotional bonds between the hero and heroine in her previous 1,001 Dark Nights novellas, she fell short of the mark with Dirty Wicked. There were good moments and sexy scenes, but there were also easy outs and ridiculous actions (or non-actions). The pair fell into unwarranted “I love you’s” after only two days, and the descriptive text like “he could taste the love in her kiss,” and “Devotion flowed from her fingertips. Acceptance oozed from her soft palms,” felt a bit over the top to me.

Yet there are brilliant moments like when Nick felt pushing Sasha into sex would keep her away, lessening his temptation. “You can force me to spread my legs for you and give you everything between them. You can’t force me to share everything under my skin.” The demonstrates Sasha’s a fighter and still has some spirit left despite the circumstances. This is followed by Nick’s “Until you can give me all that, don’t offer me your body again,” which allows a little glimpse of his true desires though. Unfortunately, those moments were outnumbered by the less brilliant ones.

In the end, Dirty Wicked was a let down for me after loving the previous two 1,001 Dark Nights titles by Ms. Black. Although there were wonderful moments in the story, Dirty Wicked had too many stereotypes and a cookie-cutter plot. The story just didn’t feel well-thought out to me. But with that said, Ms. Black has proven to be an amazing storyteller, and I will certainly continue to read her work.