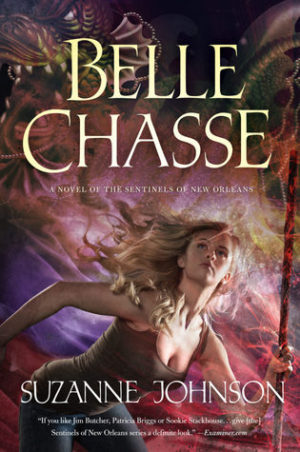 Warning: Spoilers from the privious book, Pirate’s Alley, included in this review.

Belle Chasse opens shortly after the surprising conclusion of the previous book, with our heroine, DJ, on the run with her pret friends. She was stripped of her wizarding license by current leader Zrakovi and given a death sentence. Now somewhat safely in the Beyond, in Old Barataria with Jean Lafitte and her friends, she works on a way to clear her name and get back her life, especially since her love, Alex, has remained behind, trying to change the rot from the inside.

Like the book before it, Belle Chasse is more about the overall and continuing story arc surrounding the rising tensions between the different preternatural sects than an individual, self-contained tale. Readers of the series will enjoy the forward momentum and line-in-the-sand moments; however, anyone new to the series shouldn’t start with this title. While I miss the inclusion of those standalone stories from the earlier books, I still found myself glued to the pages, anxiously witnessing the fate of DJ and so many key characters.

Due to the nature of Belle Chasse, it is difficult to compose a spoiler-free review that delves into the specific plotlines of the book. As the book unfolds, events in the pret community turn dire, and by the end, everyone must take sides. Some long-standing loose ends are tightened and some bonds are strengthen, while other relationships fall apart and true natures are revealed. To find out who does what, you have to read the book!

In the earlier titles, and throughout the first parts of Belle Chasse, I felt DJ was too much of a pleaser to be a solid UF heroine. In fact, for a bit, I felt she’d regressed, as DJ constantly filled her thoughts with “if only’s” and regret. DJ was too busy trying to please the wrong people and compromising her morals in the name of peace. However, as the story progressed and the looming war, DJ finally grew a backbone of steel, and took action to do what she felt was best. And although filled with action, the book isn’t without a tender moment or two.

Overall, I enjoyed DJ’s latest adventure, complete with its ups and downs. Although Belle Chasse really isn’t a standalone story, I liked how it tied up some loose ends and bridges the events of Pirate’s Alley to what I assume will be the final showdown. DJ and crew following a hard road this time around, but there is hope in the end.

With the wizard-elven treaty on the verge of collapse, the preternatural world stands on the brink of war. Unless former wizard sentinel DJ Jaco manages to keep the elven leader, Quince Randolph, focused on peace and not personal matters.

With no one on the throne, Faerie is in chaos, with rival princes battling for power. The still-undead pirate, Jean Lafitte, is building his own army of misfits, and DJ—stripped of her job and hiding in the Beyond to avoid the death sentence handed down by the wizard Council of Elders—can’t get anywhere near her beloved New Orleans or her significant something-or-other, Alex.

It’s time to choose sides. Friends will become enemies, enemies will become allies, and not everyone will survive. DJ and her friends will learn a hard lesson: sometimes, even the ultimate sacrifice isn’t enough.

I expected Christof to start a snowstorm above Rand’s head. What I didn’t expect was for the prince to lower his head and charge Rand like a raging bull, head-butting him in the midsection. They hit the ground, and I saw my chance at the same time Eugenie spotted me.

I motioned her toward the woods where the transport lay. To hell with the Blue Congress wizards. We were going to make a run for it while Christof kept Rand too busy to notice.

She set off for the woods, and I met her halfway. “My family thinks I’m crazy!” she wailed, loud enough to draw the attention of the tall, skinny Blue Congress wizard with the rooster haircut.

Holy crap. I whipped out the elven staff, paused long enough to aim just to the right of the wizards. They already had their hands up and were doing some of their nifty Blue Congress magic when I released my fire and blew up the tombstone next to them, sending a rain of marble and playing cards onto their heads. Around us, evidence of their magic appeared as tombstones began moving to block our escape route.

I grabbed Eugenie’s arm and pulled her around a marble stag the size of a small SUV. It had lowered its head and pawed the ground as if to charge. Blue Congress magic was so damned cool— create and re-create.

“Stop, DJ!” Eugenie grabbed my arm as I tried to race past her. “A sinkhole!”

I looked stupidly at the ground in front of us, which had opened a gulf big enough to drive a Greyhound bus into. “Go around and run fast,” I shouted, sending another shot of the staff toward the Blue Congress wizards and blowing up a ginormous marble eagle perched atop a nearby tomb.

We didn’t stop to see if the stag was chasing us, but ran for all we were worth. Finally, at the edge of the tree line, I hazarded a look back at Christof and Rand. The faery stood watching us; the elf had crumpled on the ground. Not dead, though, because in my head, far behind my protective barriers, I heard him yelling my name. 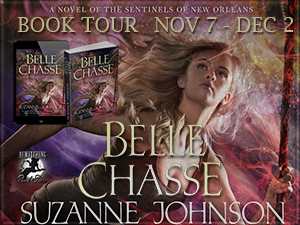 Christof grinned and motioned for us to move along. He didn’t have to motion twice, because the wizards were chasing us, still chanting and doing their finger dance. The stag was getting way too close.

I raised the staff and blew a hole in the earth in front of the advancing stag, forcing him to change direction. Luck was on our side for a change— the stag began charging toward the wizards instead, who had to stop pursuing us in order to protect themselves from being trampled beneath marble hooves.

“Let’s run to the transport before those idiot wizards can get out from under the stag.” I grabbed Eugenie’s hand and we ran to the clearing. “Help me roll this werewolf out of the transport.”

To her credit, she didn’t ask a single question. We tipped the werewolf onto his side and rolled him outside the interlocking circle and triangle, leaving him at an awkward angle with his

feet in the air. Oh well.

As soon as we materialized on the round floor of ice in the Winter Palace, Eugenie screamed. I figured she was getting her first look at the grisly remains of Faerie Princess Tamara until a blinding light knocked me off my feet and a big crack appeared in the ice between us.

“Where is my brother?”

I whirled to see Florian sitting on a block of ice behind us bundled in a heavy coat, a blanket spread beneath him, no doubt to protect his royal assets from getting cold and wet.

“He’s in Shreveport, Louisiana, at Our Lady of Perpetual Help church, having a fi stfi ght with an elf,” I said, pretty confident that of all the things he might expect me to say, that wasn’t it.

Suzanne Johnson is the author of the award-winning Sentinels of New Orleans urban fantasy series but perhaps is best known for her romantic suspense and paranormal romance books written as Susannah Sandlin, including the Penton Vampire Legacy paranormal romance series, the Wilds of the Bayou suspense series, and The Collectors romantic thriller series. Her awards include two Holt Medallions in 2013 and 2015, a 2015 Booksellers Best Award in romantic suspense, and nominations in 2014 and 2015 for the RT Book Reviews Reviewers Choice Award. A displaced New Orleanian, she currently lives in Auburn, Alabama. Suzanne loves SEC football, fried gator on a stick, all things Cajun, and redneck reality TV.

This giveaway is sponsored by the tour. Contest rules and entry information is provided on the Rafflecopter form. Open to participants who are legally allowed to participate in such a contest as allowed by their local laws. All federal, state, local, and municipal laws and regulations apply. Void where prohibited. No purchase necessary. By participating in the contest, participants agree to be bound by the decisions of the contest sponsor. Prize will be delivered by the contest sponsor. This blog, its reviewers, and the owner are not responsible for items lost in the mail. By entering this giveaway, participants agree to abide by these terms.