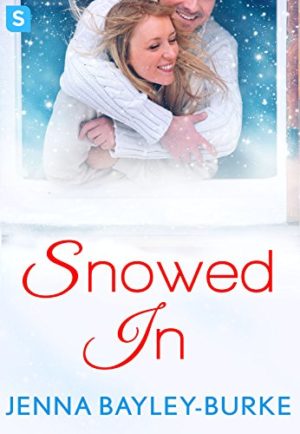 There isn’t much to tell you about the plot of Snowed In that’s not in the blurb—or the title for that matter. What I can tell you is that I genuinely liked this story when I had admittedly low expectations. Just a few weeks ago I reviewed a novella, Like Fresh Fallen Snow, with a very similar premise: successful independent woman works hard, goes to a large event at a hotel, gets snowed in with the man of her dreams, tries to remain independent and ignore her feelings. The set-up in both cases feels entirely contrived. Then again, when the title can serve as the description, you can’t fault it for false advertising. So why did I like Snowed In when I was disposed not to?

Scott Parker. Scott is the best thing about the book. Even if he weren’t tall, dark, and handsome, there’s nothing so attractive as a man who’s in love and desperate to commit. Bayley-Burke puts it beautifully in her dedication, “For everyone who’s ever been burned by a stupid boy. May you find love with a smart one. Let’s hope he’s gorgeous and rich, tall and sporting a six-pack, with captivating eyes and a penchant for saying, ‘I love you’ at random moments. Bonus points if he does the dishes and has memorized Ian Kerner’s She Comes First.”

The female lead as the aggressor isn’t the original twist it once was, but Scott still seems to hold all the cards, even when Marissa is the one coming on to him. Scott doesn’t just want a post wedding fling with Marissa Clark, he wants to keep her for the long haul. Marissa has been hurt in the past and the wedding they’re both attending is all kinds of awkward because of it. When they get snowed in together, Marissa just wants to blow off some stress between the sheets before she goes back to her regularly scheduled life. Scott has other plans and uses the time to make his case. It’s clear to the reader, even if Marissa hasn’t figured it out, that the reason she’s so stubborn when it comes to Scott isn’t because she doesn’t have time for a man in her life, she’s dated since the painful incident, but rather she knows instinctively that Scott matters. She must discover how to integrate the person she was with the one she’s become and why that makes Scott, and the circumstances that go with being with him, perfect for her.

The sex scenes are graphic, but not gratuitous per se. They didn’t read as cheesy. In fact, I have to give Bayley-Burke some kudos for plausible creativity. Sadly though, I have to take some points back for word choices in strange places. I have yet to read a contemporary romance, especially an erotic one where the word “tummy” doesn’t seem out of place. Babies have bellies, children have tummies, and adults have stomachs. It would have been an “A” read for me if she could have stayed away from some less creative phrasing. It’s clear from the rest of the writing that she’s better than that. In fact, I’m looking forward to the third installment in the More Than Friends series.

Marissa Clarke was going to murder someone. And that someone was her former sorority sister—now former friend—who had just kicked her out of her own hotel room…in the middle of the night…at their friend’s wedding…for some hanky-panky with an old fling. So much for sisterhood. With no room in the inn and no place to stay, she’s forced to accept help from the last person she ever wanted to spend the night with again: Scott, devilishly handsome, smart, and her ex-fiance’s ex-best man.

Scott Parker has loved Marissa since the first day he bumped into her freshman year of college. Only he’d never been able to tell her. After all, you didn’t just grab your best friend’s girlfriend, kiss her and tell her she was the One for you, no matter how often he’d dreamed about it. Now, years later, Marissa is single and, in a moment of pure luck, staying at his cabin. When a winter storm blocks the roads and snows the two of them in, Scott is determined to make Marissa see there can be more between them than a shared history…if only she’ll let him.