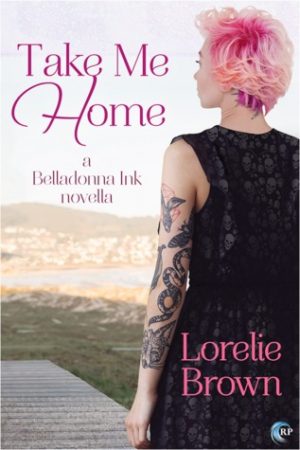 Take Me Home
Author: Lorelie Brown
Reviewer: B.
Rating: B+

Lorelie Brown is a new author for me, so I was excited to read her newest addition to the Belladonna Ink series. Keighley is a twenty-three-year-old accountant who isn’t exactly looking forward to Thanksgiving with the family. Though her mother is very supportive, her Christian fundamentalist aunt gives them both a lot of grief because Keighley is a lesbian. Fed up with the whole situation, the solution quickly becomes clear: bring a date to dinner. A Craigslist ad then leads her to the perfect “girlfriend” for the occasion.

In contrast, Brooke is a twenty-four-year-old tattooist with no real family ties whatsoever. With her bright pink hair, tattoos, and rapid-fire snark, she quickly became my favorite character in the story. Solitary in the extreme, Brooke’s independence cloaks a heartfelt longing for acceptance that she never had growing up, and she thinks that being invited to share Keighley’s will satisfy that need just a little. She also loves dogs, which completely sealed the deal for me.

While I liked this story a great deal, there were a couple of issues that niggled at me during the course of the novella. Keighley’s mother, who seems completely wonderful in many ways, consistently tolerates the antagonistic aunt, but is then fine with Keighley’s plans to stir things up during Thanksgiving dinner. It appears to be a case of “keeping the peace,” and it was a well-written scene, but I just couldn’t easily reconcile the disparity. Later on, Brooke says that Keighley’s desire for a tattoo is sudden, but Keighley begins pondering getting one before they even meet. There were a few others as well, but, overall, these discrepancies were small, and didn’t affect my enjoyment of the story.

Having said that, there was a lot to like about Take Me Home. Keighley’s mind is a very busy place, which is kind of funny much of the time, particularly when she’s trying to make a good impression on Brooke. Though they’re only a year apart in age, Brooke seems more mature and complex, while still clearly searching for something to fill the absence of really belonging. There are plenty of other great moments, care of Keighley’s sister and the neighbors, and, especially, Bennet the dog, who is my other favorite character in the story.

The intimate scenes between Keighley and Brooke occupy a significant portion of the novella, and I think it’s fair to say that their connection wouldn’t have been as believable in such a short time without them. I also appreciate that the author doesn’t try to apologize for the fact that both women enjoy sex. They flirt, tease, and play with one another, truly appreciating the pleasure they get from every touch they share. It was a refreshing perspective.

Take Me Home is a short, engaging story that’s as much about taking chances as it is falling in love. Though it’s the second in the series, it reads just fine as a standalone, and I never had the impression that any crucial information was missing. Overall, I think Ms. Brown has created a funny, thoughtful look at the joys and difficulties of letting go of the past in order to embrace an uncertain—yet unquestionably hopeful—future. Having enjoyed Take Me Home, I’d also like to read the first story in the series, Far From Home, as well as any future stories that might yet be written.

Thanksgiving arrives in one week and one day. Feeling hemmed in by parental expectations? Are they disappointed by your sapphic proclivities? I can help! The only pay I want is the holiday meal!

I didn’t know what I was looking for until I saw her Craigslist ad.

I love my family. I’m lucky to have them—well, most of them. But my aunt? I’m so tired of her giving my mom crap because I happen to be a lesbian. So one pink-haired tattoo artist pretending to be my girlfriend will annoy my Christian fundamentalist aunt right back and make my Thanksgiving perfect.

Only . . . Brooke turns out to be cuter and more complicated than I expected. And before you can say “yorkiepoo,” we kiss . . . and abduct a dog together. I want to keep them both—but Brooke isn’t the kind to be kept. Lucky for me, I’m the kind to chase what I want.