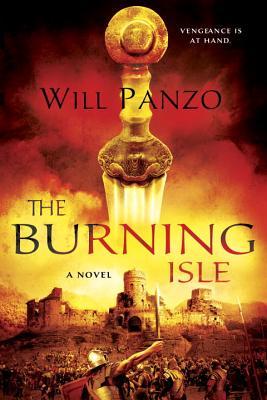 The Burning Isle
Author: Will Panzo
Reviewers: Gikany and Una
Rating: A-

Gikany and Una were fascinated by this debut novel.  The Burning Isle is a compelling mixture of dark fantasy, adventure, mystery, and suspense.  We were mesmerized by this richly complex novel.

Unfortunately there is not much we can say about this intriguing puzzle of a novel.  It is a well-woven mystery of who Cassius is, what his mission is, and why he is so dedicated to it.  Gikany and Una discussed the rich nuances of the story, but sharing that discussion could possibly spoil the plot line.  The novel is a slowly unweaving journey of discovery.  Each moment of conflict unveils another truth.  In deciphering these mysteries, Mr. Panzo expertly weaves in flashbacks that give hints about Cassius and his actions.  The overall picture is filled in section by section.  We were able to grasp pieces along the way, but until the final piece was clicked, the overall picture eluded us.

Cassius’ character is complex and beguiling.  You are never sure what is truly going on.  This aspect kept us glued to the pages. Although it appears the overall plot is resolved at the end of the novel, questions still linger.  We had the urge to reread it to see what clues we may have missed, to reinvestigate different milestones, and to be able to see the novel with the clarity of knowing.

The Burning Isle is a gripping and immensely intriguing fantasy novel.  We desperately hope there is more to come.  We found the mystery, the world, and most especially Cassius compelling and alluring.  If you enjoy dark fantasy full of politics, moral questions and action/mystery, you truly need to pick this one up!

A powerful and gripping debut grimdark fantasy novel, set in a world of criminals, pirates, assassins, and magic…

“A man has only three reasons for being anywhere: to right a wrong, to earn a coin, or because he is lost.”

Cassius is not lost…

The mage Cassius has just arrived on the island of Scipio. Five miles of slum on the edge of fifty miles of jungle, Scipio is a lawless haven for criminals, pirates, and exiles. The city is split in two, each half ruled by a corrupt feudal lord. Both of them answer to a mysterious general who lives deep in the jungle with his army, but they still constantly battle for power. If a man knows how to turn their discord to his advantage, he might also turn a profit…

But trained on the Isle of Twelve, Cassius is no ordinary spellcaster, and his goal is not simply money. This a treacherous island where the native gods are restless, and anything can happen…