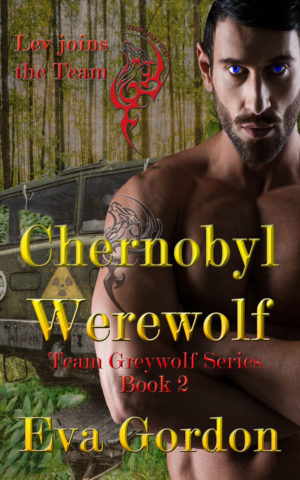 Lev promised Becker if he walked again, he’d bring him the best Russian vodka money could buy and a special Russian souvenir. Becker said if Lev was ever well enough to visit Moscow to bring him back an authentic samovar. Lev spent good cash on a rare red bronze imperial samovar. If something was wrong, a welcomed surprise might lighten his mood. Certainly, the vodka would. He opened the back of the SUV and took out the samovar packed in the case and then grabbed the bottle.

As he closed the door, an irresistible aromatic scent embedded with the sweetest blood he’d ever smelled overwhelmed his senses. He inhaled. Intoxicating. The sweet delicate floral scent of snowdrop bulbs as if the flowers emerged from January snow, bringing the bloom of spring into the winter of his cold senses.

The glorious aroma was human, female, and coming from Dr. Becker’s home. He narrowed his eyes and sniffed for Becker. The doctor’s scent permeated the area, but not currently home. Odd. The female was. Had he broken up with Selene? That would explain his sudden need for isolation. A pissed off jealous she-wolf would drive away even the bravest werewolf. But Becker was human so that might explain suddenly abandoning his critical research. No. Selene would not break lycan law and harm him. She’d get over it or delivered to the enforcer for discipline.

A desire to release his wolf and stalk the female overwhelmed him, but nonetheless he remained in control of the bear-sized Chernobyl wolf.

Lev straightened his black leather jacket and rang the doorbell.

No one answered. He should return later, after calling Becker. That would be polite, yet his wolf was bewitched. Whoever lay in wait inside the house belonged to him. Lev shook his head. Not possible. He would never take a mate. A lover, perhaps, but nobody long term. Certainly, not a weak human. And not one in a relationship with the doctor who saved his life.

The woman might not be Becker’s lover, but a patient. As sweet as her blood smelled, the blood had residual corruption as if she’d been poisoned.

I’m such an idiot. Of course. His daughter. That would explain the blood type so addictive to lycans. Becker had confided his daughter had Stallo’s blood type and like the enforcer’s mate, was human, but with the ability to have lycan children of superior blood. Too bad Becker didn’t want his daughter ever involved with werewolves. He respected their kind, his daughter should live in human society to practice medicine, marry and someday start a family.  Lev understood. Life amongst lycans was a cultural hardship for humans. Strict pack status rules placed humans below omegas. Pets. Because Dr. Becker had saved many werewolves during combat and contributed so much to werewolf genetics research, he’d been given beta status.

The soft shuffle of feet reached the entrance. The female.

He swore and turned to leave when the door opened.

Lev turned and gaped. The woman, in her twenties, dressed in a light wool robe over baggy pajamas looked up at him with enchanting amber eyes that matched her golden blonde curls, messily tied in a ponytail. Much too thin. Despite her disheveled look, perhaps after a debilitating illness, she was the most beautiful woman he’d ever seen. Krasivaya, dusha-devitsa. He whispered the translation. “Beautiful, pretty maiden.”

She met his eyes and gazed. Entranced. Not moving, not speaking, not reacting. As if she was a mesmerist’s victim, she waited for his next command.

Such beautiful eyes. The color of expensive Baltic amber. Lev could drown in them and die happy.

She tilted her head, exposing her carotid artery. Teasing his wolf to sink his fangs into her soft throat. The pretty maiden desired him.

Lev shook his head. What was he thinking? He’d unknowingly rendered her mute with his alpha magnetism. All werewolves had some mind control over humans, but his ability was superior to even the most gifted alpha werewolves. He’d promised Team Greywolf he’d never mesmerize humans, unless necessary and then only in a life and death situation. And never to submit to his sexual desires.

Lev released her mind and snapped his fingers to distract her momentarily from meeting his gaze.

She pressed her hand against the forehead and shook her head. “I’m sorry I just zoned out.” Even her voice played like music to his ears. Her accent was from the West Coast of America.

“I’m sorry to have disturbed you. I expected Dr. Howard Becker.”

“Really? Howard said he no longer practiced medicine. Not since working for some research center.”

She didn’t call him father. Odd, she smelled related to him. “Ah, he’s a friend or uncle then?”

“Howard, no, he’s my biological father.”

His body tensed. Lev still mourned his beloved father and couldn’t imagine such a lack of respect. Only in America did one call one’s parent by their name. Then again, he was told she’d been raised by her mom and stepfather. Why should he rationalize her insolence?

Damn. Something about her kept Lev enthralled. Her blood of course. He needed to get the hell out of here, before his wolf took the maiden for his. “His daughter…”

“Rachel.” She tightened her robe as if suddenly embarrassed about her comfortable sloppiness. How easy it would be for him to shred her robe and take in her nakedness.

“I brought him a gift from Russia.” He picked up the box and handed her the bottle of vodka.

“Thank you.” Rachel took it, but narrowed a glance at the box. “Open it before I let you bring it inside.”

Good for her, a suspicious woman. “Certainly.” He slowly knelt as if she had a gun pointed at him and opened the crate. Not that shooting him would hurt. Normal bullets wouldn’t kill him. He unwrapped samovar and lifted it as he stood, allowing her a close inspection.

Her eyes brightened. “Beautiful, my grandmother had a samovar, but nothing like this. Please, bring it in.”

His wolf stirred, but he collared the beast back to the den. His reaction was only biological, because of her blood, nothing more. He should leave before he betrayed the man who saved his life by doing things to his daughter no father would approve of.  He scanned the living room cluttered with books. “I’ll put the samovar by the fireplace.”

Still clutching the bottle of vodka, she nodded. “That’ll work.”

“I’m sure Howard will want to see you. Does he have your number?”

“He went to the hardware store. I’m sure he’ll be back in thirty minutes or less if you want to wait. There is fresh brewed coffee or if you prefer tea.” She held onto the counter as if dizzy.

My alpha aura? No, you egotistical bastard, she’s recovering from an illness. Now close to her, he understood. Rachel’s immune system was weak as if it had just battled a fierce illness.

One more minute with her and he’d have no control over his moonstruck and now concerned wolf, who wished to cuddle her next to his warmth. If he bit her, she’d benefit from the special healing properties of his werewolf saliva. Compared to other alpha werewolves, Becker discovered his saliva was exceptional in destroying dangerous microbes. Fool!  “No. Thank you. I must go.”

Rachel’s eyes lit up as if she figured out he wanted to hold her in his arms until she healed and then ravish her once her health restored. “I’m no longer contagious. That is, if Howard told you.”

Huh? He wished he could tell her werewolves didn’t get human diseases with the exception of rabies, which killed them quickly. “No worries. Rest.”

“Will do. Howard will kill me if he knew I came down to answer the door.”

“Goodbye, Rachel.” He turned to tear himself from the beguiling attractive woman, and let himself out. Later, he’d call and invite Becker to a nice restaurant. If the good doctor ever called him back.

As he closed the door, he heard the crash of the expensive bottle of vodka shattering on the floor.

Doctors Without Borders, Rachel Becker, M.D. survives Ebola and near death at the hands of Boker Haram terrorists. While recovering at her estranged father’s home, she meets Lev, a mysterious handsome Russian. Their chemistry is immediate—sizzling. Who is this sexy man? And why is her father upset by his visit?

Lev Volkov, born near Chernobyl, is a powerful mutant werewolf. Team Greywolf’s lethal weapon. Lev visits Dr. Howard Becker and meets his beautiful daughter. Rachel is Howard’s secret. A woman with the Stallo genetic marker, a human with desirable yet addictive blood. Forbidden. Nonetheless, his wolf fights to claim her.

When a rogue pack tries to kidnap Rachel, Lev will stop at nothing to kill them all. But the oath breaking werewolves make things much harder. Will he save Rachel – his mate – in time or will he lose everything?