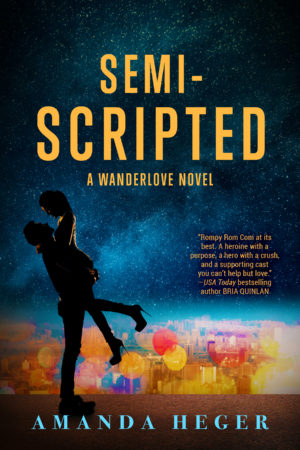 An hour later, they’d watched last night’s monologue, torn it apart, and put it back together again. Then the same with the celebrity interview spots. And Evan still had zero clue why he was in the room. He’d been tempted to pull out his phone and find out what people were saying about last night’s show. But when one of the writers tried to check his email, the look Julia gave him could have slaughtered a dozen puppies.

“You’ve got to listen to what the guests are saying. It’s obvious you don’t give a sh*t. If you don’t give a sh*t, how is the audience supposed to care?” Julia kept laying into James. And the writers. And the PAs. Like a tiny, crazy-haired Jack Russell, she dug in and wouldn’t let go. And the bigger, slobbery dogs all stood back and licked their wounds when she was done.

“You tell me how to give two sh*ts about a couple of Eagle Ninja Fighters. Maybe if we weren’t on week-to-week we could get a guest or two whose greatest accomplishment in life doesn’t involve monkey bars.”

“Patriot Ninja Fighters. It’s your job to make them interesting,” Julia said. “Besides, if we can get this intern dating segment off the ground, we can cut the interview time slots in half. At least until we can get some better guests.”

Evan’s face prickled with the stare of every person in the room. “Intern dating segment?”

Within the minute, someone had shoved a tablet under his nose. Evan’s own picture stared back at him from the front page of a celebrity gossip blog. In it, his eyelids drooped, and an I-just-ate- three-pot-brownies smile crossed his face. “So Late It’s Early Finds Its Stride Among the Lovelorn and Lonely.” As he read the headline, his eyes kept creeping across the screen to the other side of the picture. The side where the girl sat, mid-laugh, with dark hair reflecting the studio lights.

“This is maybe the worst screenshot of me ever taken. But I still don’t get it.”

“Worst? Seriously? Did you even watch the show?” Julia cued up the segment from last night. “The entire time you look like you’re about to puke on her shoes. The. Entire. Time.”

“I probably was. I’d just cleaned up someone’s vomit in the holding area.”

“Just watch.” Julia hit play, and Evan’s stupidity sucker punched him in the gut. Four years as a communications major meant he’d been forced to watch himself onscreen dozens of times. It always felt awkward and uneasy, but even after a hundred takes of the worst projects, he’d never in his life looked as ridiculous as he did on last night’s show. That stupid pot-brownie smile? Not just a random screen grab. It appeared every time the girl glanced his way. At least there was no way for Julia to say he wasn’t listening. He kept looking at Marisol like she was about to tell them all the meaning of life.

“Cut him some slack. That girl was way out of his league. Probably couldn’t help it,” James said. “Besides he’s still green. Looks like he’s fresh off the boat. Where are you from anyway?”

James let out a broad laugh, and the entire room—even Julia— seemed to relax. “Well, if we put you on, this will definitely play in Peoria. Somebody give him the pitch.”

One of the writers handed Evan a sheet of paper filled with scrawled handwriting and a few doodles in the corner. The only thing he could make out were the words across the top.

Please.)?” He took a deep breath and read it again. “Featuring Evan the Intern?”

“Think Love Connection meets The Pickup Artist,” Julia said. “Like it or not, we’re all hitching our wagon to your dumbass star.”

Marisol Gutierrez has come to Los Angeles with a single goal: win the prestigious grant that will save her family’s struggling medical clinic back in Nicaragua. But when a cute guy invites her to sit in the audience of a hip-but-failing comedy program, Marisol figures she’ll get a little entertainment out of her otherwise stress-filled trip.

Evan Abramson thought an internship at the So Late It’s Early Show would be the start of a long television-writing career, but their ratings are sinking. With every show, his plans seem one step closer to collapse. When a backstage criss throws him into an onstage encounter with the gorgeous and charming Marisol, the two become overnight sensations. And soon their made-for-television romance is the only thing keeping So Late from cancellation.

As things heat up onscreen and off, Marisol and Evan are caught between their careers and their growing feelings for one another. Being together in front of the cameras puts Marisol’s grant at risk, but keeping their romance off-screen means Evan’s show is sure to fail. Together they have to decide whether to stick with the script and save their careers or improvise their way toward a happily ever after.

Amanda Heger is a writer, attorney, and bookworm. She lives in the Midwest with her unruly rescue dogs and a husband who encourages her delusions of grandeur. Her debut romance, Without Romance, is available now from Diversion Books. The story was inspired by the summer Amanda spent in rural Nicaragua, eating gallo pinto, speaking mangled Spanish, and showing high school students how to slide condoms onto over-sized plantains. Visit her online at www.amandaheger.com.