Posted December 22, 2016 by Jen in Listen Up! Tags: Audiobook Challenge

Once again this year, I signed up for the annual Audiobook Challenge hosted by The Book Nympho and Hot Listens. My personal goal was to listen to 50 audiobooks, meeting the My Precious (I had my earbuds surgically implanted) level (30-50 audiobooks) during 2016. I am excited to report that I did meet my goal – surpassing it slightly!

Here is a list of the books I’ve listened to so far this year. 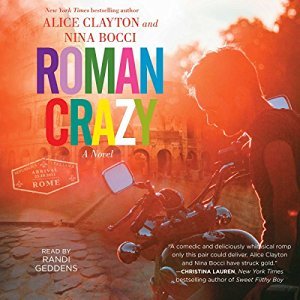 I had a really good run of audiobooks during the second half of the year. I think my average rating was 4 stars. It’s hard to pick one favorite since there were so many that stood out.

First – I continued to listen to the Dresden Files, completing six more titles in that amazing series. Each book better than the previous, and none rating lower than an A- (4.5 Stars). Seriously – that good, and with James Marsters narrating, the books are nearly perfection.

Second – I listened to and loved several contemporary romances. My favorites were Nuts and Cream of the Crop by Alice Clayton. And then Roman Crazy again written by Alice Clayton, teamed up with Nina Bocci. The narration in the last most worth mentioning. New-to-me narrator Randi Geddens did such a fabulous time, especially with her Italian accent of the hero, Marcello. From my review:

Randi Geddens pulled me into Avery’s story from the beginning. Her overall performance was spectacular! She nailed capturing all of Avery and Marcello’s emotions, which kept me completely caught up in the ebb and flow of the tale. Although this is a first person narrative, I loved her voice for Marcello. LOVED IT. She did a perfect job giving a unique expressiveness to his Italian character. Additionally, her youngish yet mature performance of Avery was spot on.

Third – I listened to my first non-fiction title, The Magnolia Story by Chip and Joanna Gaines. The reality TV stars also narrated their heartwarming tale, which added so much personality and emotion to this uplifting story.

My favorite narrative performance during part two of 2016 is a tie between Randi Geddens (Roman Crazy) and James Marsters, most notably for his work in Small Favor. I wrote of his performance:

And I honestly didn’t think that James Marsters could improve his work as Harry Dresden, but I was wrong! There is more than one highly emotional scene in Small Favor, and Marsters elevated his performance to match the content. In particular, there is one extremely powerful scene that brought me to tears as Marsters bellows Harry’s frustrations and fears. You could hear and feel the anger and grief in his voice. Simply amazing.

What about you – how did you do in the Audiobook Challenge? Do you like to listen? What were your favorites of 2016?