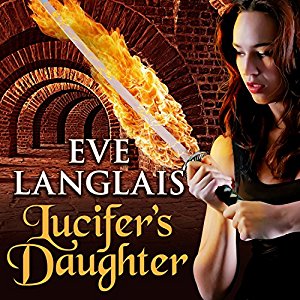 Muriel just wants to live a normal life, but as the daughter of Satan and one of the Princesses of Hell, she finds normal isn’t achievable. Yet, she tries… living on the human plane, running a bar, and saving herself until she finds true love. She does have her naughty side, even if it’s not evil enough for Daddy.

Lucifer’s Daughter is the first book in a light urban fantasy romance series from Eve Langlais. The story is shared in the first person POV of Muriel, and focuses on her adventures, which is why I call it an urban fantasy series; however, the entire first book is all about Muriel finding her true love, therefore – romance.

Overall, I enjoyed meeting Muriel and watching her fall in love with the “wrong guy,” Auric, someone her father forbids her to see. Auric and Muriel have immediate, more-than-lust feelings, but I appreciate Muriel’s caution as she tries to find out if he’s “the one.” However, the lustful feelings overwhelm the storyline far too often. Muriel is obsessed with her virginal state and whether or not she should finally have sex. It was too much for me at times. I wanted more from the story than her nonexistent sexcapades. Additionally, Muriel is written to be a smart woman, yet at times she was utterly dense and a victim of her own ignorance, which felt false, since she is an intelligent character.

Muriel’s love life aside, Lucifer’s Daughter got very interesting once Muriel wasn’t obsessing over Auric or her virginity. There is an unusual big-bad making moves to overthrow Satan, bringing chaos to the underworld. The glimpses we saw intrigued me greatly, and I need to know the connection between this mysterious new evil and Muriel’s early childhood. This alone is enough to keep me listening to the series. And honestly, I enjoyed Auric and Muriel’s romance, once they opened up and were honest with one another.

New-to-me-narrator Rebecca Estrella provides the performance for Lucifer’s Daughter. At 1.5x speed, I enjoyed her vocalizations, and her “narrator Muriel” is strong. She seems to capture the entitled yet honest feel I think Muriel embodies. Ms. Estrella has a good mix for her male and female voices; nothing that overtly stands out as being exceptional nor horrendous.

Overall, I enjoyed Lucifer’s Daughter, especially when the story stopped focusing so much on Muriel’s virginity. After Auric and Muriel cleared the air and opened up, their journey to true love felt real, and I enjoyed the romance. I found her relationship with Daddy most entertaining. The introduction of a mysterious big-bad is fascinating and exciting, opening the door for an expanding mythology.

It drives my dad nuts I’m such a goody two shoes, but the fact that I’m a virgin makes smoke pour from his ears. See, I’m determined to save myself for love, but daddy dear, more commonly known as Lucifer, just wants me to stop being an embarrassment. Would it kill you to sin a little?

Maybe he’ll get his wish because I met an intriguing hunk last night in my bar. Could he be the one? He certainly melts my panties like marshmallows over the coals of Hell, but do I dare trust him? My last boyfriend thought he’d gain infamy by killing me. He’s infamous all right. Dad had him mounted on a wall, his version of modern art titled, ‘Touch my baby girl and die’. Cute in a twisted way.

My love life isn’t the only thing I’ve got to worry about. There’s someone threatening the denizens of Hell, and while my daddy says to not worry my pretty little head about it, I an involved because whoever is behind the attacks keeps coming after me.

Bring it. I’m not afraid. Being a princess of Hell means that sometimes I have to grab a demon by the horns and slap it around. It’s what keeps my ass looking great.

Nothing in my life is ever simple, and I blame that on my dad, Lucifer. Assassination attempts, hellhounds, and a rebellion in Hell? A piece of cake compared to the turmoil in my heart. No one ever told me love would be the toughest battle of all.