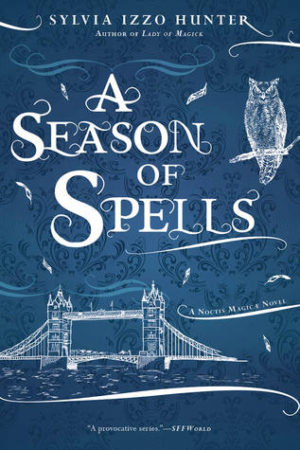 It turns out that A Season of Spells is the final book in the Noctis Magicae series.  I was surprised to discover it was a trilogy at the end.  This final book is a perfect end to this enchanting series.

Note: There are spoilers from the first two books in this review, but nothing more that what the book blurbs provide.

I have thoroughly enjoyed the characters and this world that Ms. Hunter has created.  The mixture of a historical setting, magic, politics and light romance was enchanting.  Though the plight of our heroes was dire at times, their adventures were gripping until the end.  Now looking back I see this series as a trilogy of Sophia bringing a new age to her world.

Sophia is a powerful mage, though looked down upon by the magical authority due to her gender. It seems women with magical abilities were frowned upon during this time period in Britain.  It was compelling to follow Sophia as she goes from despised daughter to crowned princess to respected magistra.  Following her as she learned to navigate the political waters of being a long lost princess (to the king’s former wife) and the ramifications of the choices she makes.  The different mysteries she has encountered and her drive to protect not only her loved ones, but the King and her people were gripping.

In this final installment, Sophia breaks through and shows her true self.  When following protocol fails, she rises to the challenge to save Britain.  Through a desire to resurrect a magical college for women, she stumbles upon the clues to save her people from invasion.  I really enjoyed how Sophia shows how much she has grown from her ability to stay calm when under duress, follow protocols, and follow not only her heart but her head.  It was especially illustrated in the separation between her and Gray.

I continued to love the relationship of the varied main characters.  The conspiracies they weave in order to attain the knowledge they seek.  Seeing Lucia and Roland’s journey from arranged marriage to one of affection was sweet.  As the two follow along in Sophia’s projects, we discover they are two sides of the same coin.  I found it endearing when they realized it.  I have truly enjoyed the cast of characters in this trilogy and will miss them.

Though this is the end of the trilogy, I hope that Ms. Hunter will return to write more in this world.  Season of Spells nicely ties up most of the characters and the world.  If you enjoy a bit of magic in your historical adventure/romance, then you might want to give the Noctis Magicae a try.

Three years after taking up residence at the University of Din Edin, Sophie and Gray return to London, escorting the heiress of Alba to meet the British prince to whom she is betrothed. Sparks fail to fly between the pragmatic Lucia of Alba and the romantic Prince Roland, and the marriage alliance is cast into further doubt when the men who tried to poison King Henry are discovered to have escaped from prison.

Gray sets off to track the fugitives abroad, while Sophie tries to spark a connection between the bride and groom by enlisting them in her scheme to reopen a long-shuttered women’s college at Oxford. Though a vocal contingent believes that educating women spells ruin, what Sophie and her friends discover in the decaying college library may hold the key to protecting everything they hold dear—as well as a dark secret that could destroy it all.