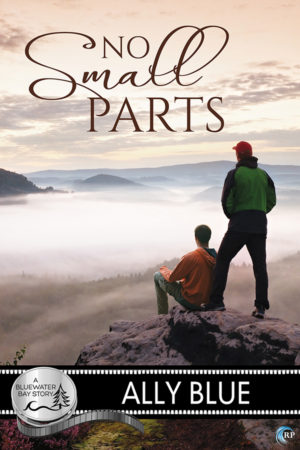 No Small Parts
Author: Ally Blue
Reviewer: B.
Rating: A-

Born and raised in LA, Rafael Cortez isn’t exactly at home in the rugged isolation of Bluewater Bay. Still, he’s more than willing to put in the necessary time as a PA if it helps him become a director in his own right. Meeting someone he can see himself becoming serious about certainly hadn’t been part of the plan, but there’s just something about the brooding, defensive Nat that Rafael can’t resist.

Bluewater Bay local Nat Horn never expected his tiny part on Wolf’s Landing to turn into anything more than a way to pay the bills after his father’s logging accident. When he’s offered a larger role by one of the directors, he jumps at the chance to make both their lives easier. Developing a few friendships of his own in the process, particularly with the irresistible personal assistant of his former crush, is a risk he can’t help taking—even though he’s sure he’ll lose him in the end.

I was both surprised and pleased to note that this is the sixteenth book in the Bluewater Bay series, since it really doesn’t feel like there have been so many. As has been the case with most of the others I’ve read, No Small Parts seemed both familiar and unique, and reminded me why I continue to be drawn to these stories. Nat and Rafael do follow a somewhat recognizable pattern, given the polarity of their personalities and backgrounds, but Ms. Blue composes their tale around a distinctive framework that allows it stand just fine all on its own.

As far as the main characters go, I thought that Nat and Rafael were an intriguing couple, and I enjoyed Raphael’s patience while Nat consistently strove to find steadier ground beneath his feet. Their respective backgrounds are different enough to make the pairing seem farfetched on the surface, yet their personalities somehow made them a perfect fit for one another. I also felt the “outsider vs. the locals” aspect of some of these stories worked especially well in their case, as the roles are reversed depending on whether a scene is taking place within the “Hollywood”-ness of the show, or the Bluewater Bay that exists outside of it.

Overall, I feel that No Small Parts is a sweet, thoughtful addition to the Bluewater Bay series. As it focuses once again on the television show that is the engine driving the series as a whole, it was nice to revisit some familiar characters in their element, as well as the honorable mentions within the town itself. Rafael and Nat are a seemingly unlikely pair who end up complimenting one another perfectly, both sexually and otherwise, and I appreciated that their romance wasn’t an instant and convenient cure for the struggles they continued to face as the story progressed. Ms. Blue is a good fit for the series, and I’d very much like to see her write more stories in the Bluewater Bay universe in the future.

Nat Horn is almost living the dream. His part as a werewolf extra on the hit show Wolf’s Landing has somehow turned into a regular role. Beautiful rising star Solari Praveen has taken an interest in him. He’s even making enough money to think about getting out of Bluewater Bay someday. Except his retired dad’s dependence on pain medications seems to be getting worse, and Nat’s the only one around to take care of him.

When Nat learns that Solari’s interest isn’t romantic, his disappointment is surprisingly short-lived, because in getting to know her, he also got to know her assistant, Rafael. And Rafael turns out to be the kind of friend—and potential boyfriend—Nat never dared to dream about.

Distracted by his astonishing new life, new friends, and new possibilities, Nat lets his guard down, and suddenly his life goes careening out of control. Racked by guilt, he tries to push his new friends away, but the bonds he’s formed are already too strong. In fact, they’re strong enough to pull him forward, into the future he’s been longing for—but to get there, he’ll have to let go of the past.

Reviews in the Series:
Bluewater Bay

Hello out there, lovely readers. I’m Ally Blue. Welcome to the blog tour for my new book, No Small Parts. It’s the latest addition to Riptide Publishing’s awesome Bluewater Bay universe. I love this story, I love my boys—Nat Horn and Rafael Cortez—and I’m excited to give y’all a glimpse behind the scenes. Thanks so much to my blog hosts for having me here, and thank you all for joining me!

Ally Blue is acknowledged by the world at large (or at least by her heroes, who tend to suffer a lot) as the Popess of Gay Angst.

She has a great big suggestively-shaped hat and rides in a bullet-proof Plexiglas bubble in Christmas parades. Her harem of manwhores does double duty as bodyguards and inspirational entertainment. Her favorite band is Radiohead, her favorite color is lime green and her favorite way to waste a perfectly good Saturday is to watch all three extended version LOTR movies in a row.

Her ultimate dream is to one day ditch the evil day job and support the family on manlove alone. She is not a hippie or a brain surgeon, no matter what her kids’ friends say.

To celebrate the release of No Small Parts, one lucky winner will receive an ebook from Ally’s backlist! Leave a comment with your contact info to enter the contest. Entries close at midnight, Eastern time, on December 24, 2016. Contest is NOT restricted to U.S. entries. Thanks for following the tour, and don’t forget to leave your contact info!

One response to “Review + Blog Tour: No Small Parts by Ally Blue”