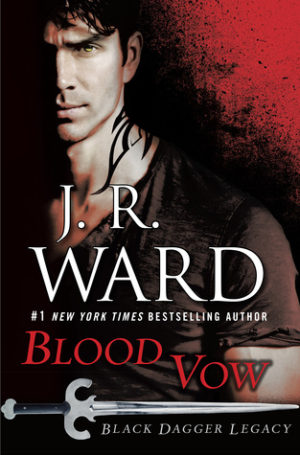 The Warden has truly brought us back to essence of what made her Black Dagger Brotherhood (BDB) series so addictive at its inception.  Blood Vow is an emotionally charged, grittily gripping, and darkly sensual read.

****Please note that this review may contain spoilers from the previous Black Dagger Legacy (BDL) book as well as from previous BDB novels.****

I fully admit that I am a BDB addict.  Though I was very disappointed in a previous BDB novel that I will not name, I decided to continue the series.  On a whim, I volunteered to read the spin-off series since it was a “return” to the early feel of the BDB.  Blood Kiss grabbed me from the beginning and I felt like a return to the fold of BDB.  Long term fans, you will understand when I tell you, Black Dagger Legacy feels like home.

In Blood Vow we follow the romantic journey of Axe – a new trainee with the BDB and Elise, the daughter of an Aristocrat.  Though it appears to be the usual highbred daughter who falls for a commoner tale, it is more than that.  Axe bears an understandable grudge against the aristocracy and with mating in general.  However, as he grows to understand himself and mature past the anger and disappointment, he finds his true inner strength.

Elise is no shrinking violet; she is not the typical aristocrat’s prized daughter.  She is striving to be more than her station would deem her, as well as what thousands of years of cultural bias expect of her.  I loved Elise.  Most couples in romantic novels suffer from not communicating.  Elise has no problem communicating, but needs to work on listening and not projecting her own opinions on others.  However, she is the first to admit fault and seek forgiveness.  Her earnestness in trying to understand others and help truly defined her.  Though Axe and Elise’s story isn’t unique, their choices and personalities make it unique.  I really loved watching both of them grow and mature.

One drawback that may be a cause of annoyance to some fans will be the connection between this series and BDB.  The story of Rhage and Mary did not end in The Beast.  It is continued in this story (surprise… surprise).  If this trend continues, I could see fans being irritated that they are not truly standalone series that share the mythology and characters.  If you have not read The Beast, I feel that you would be a little lost picking up Blood Vow.  Also, there is a connection made between a new character and a BDB character that may be a future romantic tie (possibly in BDB or it could be in BDL).  I’m not sure if this is the case.  But if it is, BDB and BDL are indeed the same series — each one expanding on or setting up the other.  I just thought I’d warn you.

I really enjoyed seeing the new group of trainees taking to the field.  Watching the continuation (and in some ways completion) of Rhage and Mary’s story in The Beast was awesome!  I did find it interesting that the mystery that Elise needs to uncover was really a continuation of the plot of the previous story, just from another perspective.  Thankfully it was not a rehashing of it.  However, one point of contention: I still wonder how a female can be claimed (mated) by a male and still have other males not notice the scent of the claiming.  This one mythology snafu irked me but it was not a game changer.

Long-term fans of the series, especially those that may be a bit miffed at the later novels, may really enjoy this new spin-off.  However, this second novel shows that it may be more connected to the main series than promoted.  I did love the story of Axe and Elise and look forward to the next novel in this series.

#1 New York Times bestselling author J. R. Ward returns as her thrilling, original spin-off series set in the world of the Black Dagger Brotherhood continues! When a brooding vampire warrior-in-training teams up with a quick-witted aristocrat to solve a deadly mystery, the only thing more dangerous than their mission is their undeniable attraction.

One response to “Review: Blood Vow by J.R. Ward”