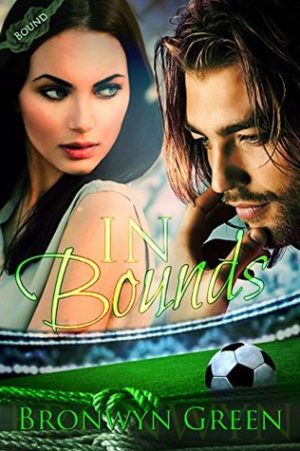 After finding out her school principal husband was having an affair with the mother of one of her students, Ivy Wright decided to take an extended vacation helping out her best friend’s family in England. While Ivy enjoys tutoring Charlotte’s children, she hopes that Charlotte’s younger brother doesn’t remember her… the drunken woman with whom he had a hookup in the coat check at Charlotte and Caleb’s wedding reception.

Will Darby has been sidelined from his professional soccer (football) career due to a knee injury. With mandatory time off, he’s hoping to re-connect with Ivy, the one woman he hasn’t been able to forget in the past twelve years. And when he sees Ivy again, he knows he needs to explore their mutual attraction… and kinks.

In Bounds is another wonderful, sexy romance in the Bound series, a set of loosely connected, standalone BDSM-lite stories from Bronwyn Green and Jessica Jarman. I love that the books, In Bounds included, embrace healthy relationships, focusing on couples that enjoy sex and exploring mutually satisfying kinks. While there may be bumps in the road and issues to overcome, they don’t dominate the pages of the story.

Will is a man obsessed. He’s never forgotten Ivy or how much he enjoyed their brief encounter. Twelve years older and wiser, Will has taken the time to learn how to please a woman and what he wants for himself. He’s cocky, but not overly arrogant, and completely direct. He tells Ivy pointblank how much he wants her and what exactly he wants to do to her. Such direct talk is refreshing and thrilling. And while he gives Ivy space to deal with her own issues surrounding her ex-husband’s actions and detrimental attitude, he supports her both emotionally and physically, almost willing her to recover and commit to him. Will is understanding, patient, sexy, and kind… almost too much so. But who doesn’t need a bit of perfection in their lives now and then?

Ivy has issues, but she doesn’t dwell. She’s determined to enjoy her time with Charlotte, but as the book progresses, we see how lonely Ivy truly is. She carries her baggage, and Will wants to take it from her. It’s heartwarming to see how much Will gets her to open up and trust again, after some back and forth, of course. While Ivy’s biggest concern during the entire book seems to be Charlotte finding out about her night with Will back twelve years ago, there is actually a much larger secret that is downplayed almost too much. While I finally picked up on it over halfway through the story, I felt like the weight of the secret should have been a bit more present in Ivy’s conscious thoughts throughout the book.

Overall, I adored Ivy and Will, and enjoyed their story. While it seemed to me that the overall timeline was a bit loose, it was more of a small annoyance than a problem. Rather, the author puts the focus on the romantic storyline, giving it heart. Will was perfect, maybe a bit too perfect and understanding, but that’s just what Ivy needed and deserved. In Bounds warmed my heart and put a smile on my face.

Her summer holiday just got a hell of a lot more complicated. Ivy Wright knows several things to be true: Marrying a guy who can’t keep it in his pants is a terrible idea. So is having a drunken, secret one-night stand with her best friend’s little brother. And catching a soccer ball with one’s face never works out well for anyone. When all three collide, what was supposed to be a relaxing vacation in the English countryside becomes unbelievably awkward not to mention sexually charged.

While recovering from a potentially career-ending injury, English football player, Will Darby, runs into the one woman he’d given up hope of ever seeing again. No longer chafing at being sidelined, Will is a man on a mission. He’s never forgotten his one and only night with Ivy, and their attraction is stronger than ever.

Convincing her to give him a chance is only the first hurdle. Getting her to admit her kinks and let him give her what she needs physically and emotionally is another, but is their connection enough when her secrets keep pushing them apart?

Reviews in the Series:
Bound Series