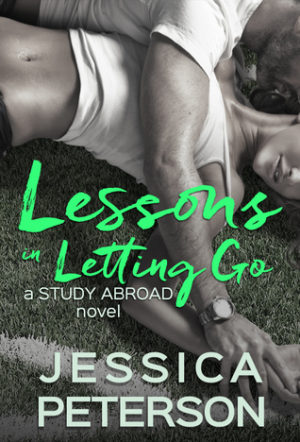 NO! It can’t be over! I’ve been reading Jessica Peterson’s Study Abroad series, and I’ve adored it. While I might be a woman of a certain age, I could identify with the characters and I found myself rooting for the characters to overcome their conflict throughout the story.

After I told some of the characters to pull their head out of their behind.

I really liked coming back to Laura & Rhys’ story. We’ve caught glimpses of them through the first two titles in the series, and I’ve been champing at the bit to get to their story.

Seriously. Is it only me, or are soccer players—especially those with a Welsh accent—super hot?

I did have some issues with the ending. I felt the resolution moved too fast—but I’m a huge pacing geek. Don’t let this little, tiny thing deter from picking up this title. With that said, the grand gestures Rhys did to win Laura back seriously melted my frigid Michigan heart (yes, we’ve had a quantity of snow already).

Laura came to Spain to find herself. Basically. She made a bucket list and everything. There were a few things about Laura that made me pause. First, she’s got… issues. Issues big enough that I wanted to know more—but my brain filled in the blanks. Second, I really like that she realized she was losing herself in Rhys. Lastly, Laura was a REAL ‘GIRL’. I’m sure most of us can see a little of ourselves in Laura, which made me connect with her even more that just her ‘issues’.

Rhys. Not gonna lie. I kinda wanted to slap him through a good chunk of the book. But, you guys, when he started to redeem himself? I. Fell. Hard. I also connected with Rhys on a few levels. I know what it’s like to have a knee injury. I could imagine everything he went through. The hours of PT, the appointments…and I know what it’s like to be a soccer mom (I was never the mom with the Juicy Coture yoga pants—promise!). While the writing about soccer was detailed enough to not insult someone knowledgeable about the game, it was well-explained enough so novices wouldn’t be lost.

If you’re looking for a thoughtful contemporary read with college-aged characters, I highly recommend the Study Abroad series. I’m going to miss these characters…but might we see more from some of the secondary characters???

“Ten minutes ago, I was just an American student studying abroad in Spain. But now? Now I’m a professional soccer player’s muse. His good luck charm…”

Soccer star Rhys Maddox’s recovery from an injury isn’t going well—until one night with a beautiful American and a few terrible pick-up lines changes everything. With Laura at his side, he plays smarter, runs faster, and fights harder than he ever has on the pitch. She’s just the good luck charm he needs to turn his flailing career around.

Laura Bennet begins her semester in Madrid with plans to ditch bad habits and worse boyfriends. But when she unexpectedly gets caught up in Rhys’s A-list life, her plans are put on hold. Who wouldn’t skip class to fly on a private jet with a studly Welsh footballer? It’s a no brainer, or so she thinks. Turns out Rhys’s glamorous lifestyle hides an obsession with appearances—an obsession that makes her totally miserable. Determined to take back her happiness, Laura decides to dump Rhys and tackle a “Spain Bucket List” on her own.

But Rhys isn’t letting his good luck charm go without a fight. He’s spent his entire life trying to earn his way into the big leagues, and he’ll do anything to win—even risk his carefully crafted image to help Laura with her bucket list. Will he be able to let go of his ego? Or will he and Laura ultimately let go of each other?