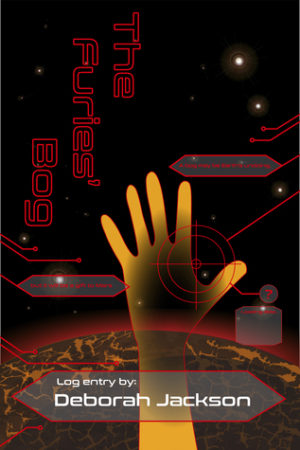 The description of Deborah Jackson’s The Furies’ Bog will draw in any regular sci-fi reader.  It promises a lot.  Jackson spreads her tale across multiple locations worldwide and even space, incorporating genetics, archeology, and secret agents. The Furies’ Bog was thought-provoking. It was well-written. Parts of it were definitely engaging, but sadly, you could say all of those things about a textbook on a subject in which you were interested.

Jackson has definitely done her homework—literally.  According to her end notes, she studied science journals and went back to school at MIT to take classes with this book specifically in mind.  You have to be in awe of someone that dedicated to writing a scientifically plausible story.  It’s a relatively long story, however, coming in at over 500 hundred pages. Long books are not unusual in the sci-fi world, but The Furies’ Bog is not a page-turner despite a fair amount of action. It wants to be an exciting sci-fi thriller, well-grounded in current genetic science, but never achieves real momentum, getting—if you’ll excuse the expression—“bogged down” in the science. She even includes an entire thesis paper within the body of the story.  (In the electronic version, you can click a link to skip over this.) In the first of two appendices, which is not wholly unusual for the science fiction genre, she includes the entire DNA sequence of the LIPE gene referenced in her thesis stating, “I wanted to emphasize how a small mutation in this entire length could alter the function, or trigger the dysfunction, of a protein and upset the balance in our bodies, or even entirely alter the way our bodies work.  These mutations can lead to cancer or other diseases, or set us on a new evolutionary path.”  I don’t know that that actually adds anything or even emphasis to her story.  Before the link to skip it, Jackson offers this disclaimer:  This document contains a variety of technical terms that may be confusing to the average reader.  Feel free to skip over it, if you find it tedious. To me, it felt a little condescending.  I’m not exactly sure who she intended as her primary audience.

Probably most significant to me, because the action of The Furies’ Bog is stretched across multiple locations, Jackson has main characters in each of those places.  This meant we didn’t spend enough time with any of them to really become invested in any single character or relationship.  Rather, it is a single conspiracy that tenuously holds all the pieces, characters, and locations together.  The problem is that while the science will spark at least the curiosity of any routine sci-fi reader, I didn’t feel the conspiracy, lasting across centuries of history, was worthy of the drama Jackson was trying to create.  More than one of her characters even said something to that effect in the last quarter of the story, “The world is changing, Hondo. It’s becoming more tolerant of differences.”  She basically invalidates her own premise.

None of my criticisms are enough to really downgrade my opinion of the book until, what I consider, to be an epic flaw slapped me in the face.  Despite the length of the book, it ends very abruptly.  There’s no payoff for the reader.  It’s not even a real cliff hanger.  It feels like it was just too long and so the author found a stopping place and put a period there. Unapologetic to the reader, in the author’s notes Jackson states, “As you can tell, the story isn’t finished.  But neither is our endless quest for understanding our own path in evolution…and our continuing need for exploration.” Even books in a series must have their own sense of conclusion.

If you’ve got the science itch and are going to dive into this one, get the electronic version.  It’s totally affordable under $5, but the paperback, because of its length is over $20.

Archaeology graduate student Felicity Cratchett discovers mysterious mummies in the subpolar region of Polar Bear Provincial Park. These bodies are connected to the greatest secret of our time—a secret with ties to ancient Rome, roots in Botswana, and a link to the first people to exercise abstract thought. This revelation will challenge the conventional theory of human origins and human evolution.

Meanwhile, astronaut Lucas Wilson, while terraforming Mars, descends to the Red Planet’s surface. Mars, in its birth pangs, will challenge every step he takes, with gas explosions and raging rivers, with damaged fuel processors and limited oxygen supplies. In the midst of these disasters, Lucas must keep his companions from discovering a feat of genetic engineering that will transform Mars like nothing has in over a billion years. The double helix of this masterwork twists all the way back to Earth and Felicity’s mummies. If he fails, Lucas must decide whether to take up Mars’s sword, or to cast the weapon into a bog.

One response to “Review: The Furies’ Bog by Deborah Jackson”