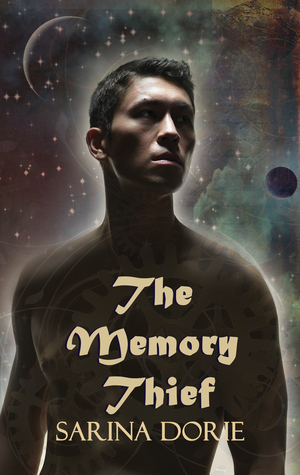 The Memory Thief is a different type of steampunk series.  This Victorian era science-fiction novel is an interesting world.  Suffice to say, I enjoyed it and look forward to the next one.

First, let me say that this was more mystery/adventure romance than science-fiction. Though it is science-fiction, the science and steampunk qualities are in the background. The plight of Felicity in recovering her memories is gripping. The planet and history of the Jomon people is rich and fascinating. I really loved the world I found myself in. The memory moss, the intriguing creatures, and the evolution that has obviously taken place are all quite intriguing.  I truly found myself lost in the world.

The novel is told from Felicity’s viewpoint and utilizes flashbacks. Some of the flashbacks are consciously done when she is partaking in a memory swap. However, some chapters are started with a moment from the past. Though they are interesting and give background to the novel, I felt that they stunted the flow of the story a little, but not enough to inhibit my enjoyment.

I enjoyed the courtship between Felicity and Nipa (the ruler of the Jomon tribe). Though some of the novel is fairly easy to figure out, I was still surprised by some of the past. Felicity’s strength of character is equal to her kindness to the indigenous people. I enjoyed her intelligence, especially when up against Nipa’s cunning. Nipa’s character was equally charming and ruthless.  I enjoyed trying to figure him out.

Felicity’s intended, Merriweather, seems to be a filler character.  It is not surprising when the Jomon use him as a patsy.  However, he grew on me.  He seems very out of place in the world, and in the novel, especially in Felicity’s eyes.  He is very naïve and innocent.  More innocent than I would think an aristocratic male would be in Victorian England.  However, I think there is more to him and I hope to learn it in the next novel.

I am reluctant to give anything away, but the emotions of the novel caught me off guard.  This book is about remembering and recovering from the past. The past is more than just events, but emotions as well. Once I finished the novel, I could see how the novel dances slowly to the truth. I really enjoyed the flow and the overall crafting of the story.

All in all, The Memory Thief is an excellent start in this new series.  Though the ending was a bit surprising, I am eager to see what is next.  If you enjoy a good romantic mystery/adventure set in a Victorian steampunk sci-fi world, this is not a novel to miss!

What would the Victorian era look like if they had “rediscovered” space flight? Would the British be interested in colonizing the continent of America if they could colonize an entire planet?

Felicity is a young lady betrothed to a British noble of rank and fortune who will someday inherit a space station. Her life should be happy and perfect. Alas, she fears she will never achieve happiness—or wholeness— until her memories have been returned by the man who stole them.

In pursuit of her past, Felicity returns to an alien planet where she once encountered descendants of Japanese colonists from Earth who had settled millennia before. After a seven year absence, she finds the world much changed. The climate and geography have been altered, the planet has been destroyed by unethical surveyors, and she is told the man she believes stole her memories— a man she once loved and trusted—is dead. Her only hope for finding answers about her mysterious past is performing the Jomon courtship ritual of memory exchange. In doing so, Felicity finds herself falling in love with the alien planet’s leader, even though she is already engaged. Only when she learns to let go of her fears can she learn the secrets that may aid in the freedom of the Jomon people—and herself.