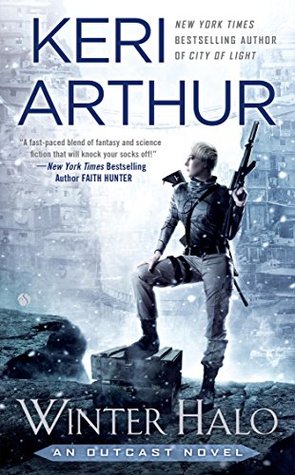 Winter Halo, the second installment of Ms. Arthur’s Outcast series, picks up just after the action-packed conclusion of the first book. The series follows Tiger, a human-shifter-vampire hybrid known as a déchet, as she works to save a number of young children captured for nefarious purposes. The fantasy-based world is detailed and complex, and I recommend starting with book 1: City of Light, to best understand this multifaceted mythology (see my review for City of Light for more detail on the world). However, Ms. Arthur does a fantastic job recapping the important points of the first book right up front in Winter Halo, therefore if one wanted to, you could probably jump in with the second title.

After reading the first book, I was on the fence with the series. While the mythology was interesting and I really liked Tiger, I didn’t care for any of the supporting characters other than the young déchet ghosts. I felt the world-building, which was overly complicated, dominated too much of the story, and the overall plot felt like a set up for the second book. While some of these issues were successfully addressed in Winter Halo, the overall mythology and plot remained difficult to follow.

First, what worked… I continued to like Tiger, who makes for a wonderful tragic heroine. Although everyone hates her because of what she is, Tiger continues to do the right thing. Her moral compass may have been warped because of war and isolation, but it remains true, and saving children is what is most important. She uses every means available, including her own body and soul, to protect the innocent. She makes the hard decisions, even when they aren’t popular.

I also enjoy Tiger’s relationship with Bear and Cat, two young déchet ghosts. They have been her companions for over a century, and their closeness gives Tiger an emotional safety net, grounding her when she has every right to walk away from her mission. The pair provides lightness and comic relief into this dark tale.

Additionally, Tiger’s friendship with Jonas improved tremendously in Winter Halo. Getting past stereotypes and prejudices, the twosome opens the door to the possibility of more, giving honest pieces of themselves to each other. I loved their candid dialogue – admitting there is an attraction there, regardless of how “wrong” it would be. And via Tiger’s first person POV, we understand she feels something much greater than her seductive programming for Jonas: “I could survive chemicals and rifts, vampires and wraiths, but I wasn’t so certain I could survive having my heart broken.” However, this budding romance is marred by Tiger’s duty, seducing and bedding another man. While it is understood by and remains a non-issue for the characters, I found the situation made it difficult for me to get behind the romance.

Even with the improvements to some of the characters, the plot remained difficult to track over the course of the entire story. The political maneuvering and plotting/planning made the first three-quarters of the book challenging. Additionally, I felt some of the actions taken were detours with dead ends – superfluous pursuits that didn’t add to the overall picture in any meaningful way. Also, as the author reveals bits and pieces about what is going on with the false rifts, dark magic, and the genetic manipulation, I found myself lost. For most of the book, even Tiger didn’t seem to be able to piece together the larger picture. Yet, once again, the book got so much better, stronger, in the end when things pick up. When the attraction is forefront. When the action is strong and situation dire.

Overall, I enjoyed reading Winter Halo, but honestly, it was tough to sink into it and lose myself in the story, and I could only get into it for short bursts. While the book is full of action, sometimes the overly complex plot made the book drag. However, I was fascinated with the unique world. I liked Tiger and her relationships with Cat, Bear, and Jonas. The last quarter of the book was gripping. It’s frustrating because I want to know what is going to happen to Tiger, Jonas, and their cause. Will the world be overrun by Others? Can the shifters and humans survive?

When the bombs that stopped the species war tore holes in the veil between worlds, they allowed entry to the Others. Now, a hundred years later, humans and shifters alike live in artificially lit cities designed to keep the darkness at bay….

The humanoid supersoldiers known as the déchet were almost eradicated by the war. Ever since, Tiger has tried to live her life in peace in hiding. But in the wake of her discovery that Central City’s children are being kidnapped and experimented on, Tiger’s conscience won’t let her look the other way.

The key to saving them lies within the walls of a pharmaceutical company called Winter Halo. But as she learns more about the facility, Tiger’s mission is derailed by a complication: Winter Halo’s female security guards are being systematically attacked by an unknown force.

Reviews in the Series:
City of Light by Keri Arthur (Outcast #1)

One response to “Review: Winter Halo by Keri Arthur”