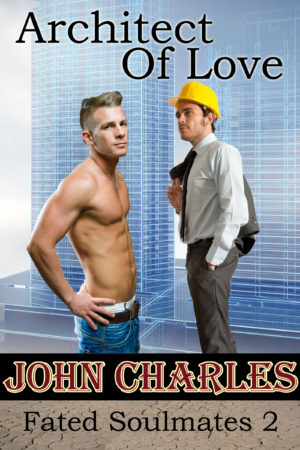 The tall blond kicked the door closed with his foot as he pinned the shorter, more muscular man against the wall.  One hand held the shorter man’s hands above his head, the other a handful of his shirt.

“Lance is a pretty name for such a muscular guy.  Why’d your mother name you that?”  His face was mere inches from Lance’s.  They breathed the same air as they stared into the other man’s eyes.

“She has a thing for different names.  Don’t ask me why, she just does.”  Lance was almost hyperventilating; his brown eyes were wide with curious anticipation, the pupils dilated.  “I might ask what was in your mother’s mind when she named you Forrest.  Were you conceived in the woods?”

A growl emitted from the tall blond.  He pushed Lance harder against the wall, his entire body now firmly against the shorter man.  “Never asked where they f**ked and don’t want to know, but the name works for me.  Does Lance suit you?  Are you?”

“That’s a rather personal question, don’t you think?  After all, we just met.”  Lance struggled to keep his body under control.  He could feel the heat emanating from Forrest, his breath smelled of Scotch, his muscles were taught as a lion’s ready to pounce.  His groin pressed just above Lance’s and it was hard with desire as was his own.

They held eye contact for a long minute then Forrest moved his head, slowly as if testing the space between them.  Lance followed his full lips as they neared his own.  They were heavy with lust, slightly open, tongue barely visible.  When they touched his, he felt a tingle down to his toes.  He moaned.

Forrest held Lance in place, as he tasted the shorter man.  Beer mingled with breath mint met his tongue as he pushed to gain control.  He heard Lance’s moan and continued to push for more.  His body was ready to burst.  He felt Lance’s heat against his and knew the man wanted what he presented.

Suddenly as if on attack, Lance twisted in the taller man’s arms.  He forced Forrest around and pressed him against the wall where his back had lain seconds prior.  “How does it feel now?” he whispered unable to voice anything louder.  “You want more?  Can you handle it or are the trees too big, Forrest?”

Lance Bartner loved working with his hands, made his living refinishing furniture.  He would have enjoyed a relationship had the right man crossed his path.  But who would want a laborer like Lance?

Forrest Dentren was an architect and city planner.  Some said he was married to his job, others said he was too picky.

Do opposites really attract?  Architect Of Love explores the tenuous relationship between a professional and a blue collar worker as Forrest and Lance try to work through their differences to find common ground.  Two people from opposite ends of the world, no roadmap, no directions, no ideas how to make it work.

The Fated Soulmates series follows people as they navigate their lives amidst the ever-changing landscape of work and play.  Doctors, paramedics, architects, students: professional and blue collar with a focus on living their lives, finding that illusive lover, and learning that sometimes the partner of their dreams is not who they thought he’d be.

Larry Thomas aka John Charles spent his youth struggling with reading.  Not until his late teens did he discover the cause – dyslexia.  Only then, with guidance and professional help, did he learn to read.  From that point forward, he discovered his love for the printed word.

Writing was always part of his professional career, but not until he retired did he move from creating marketing and technical materials to writing novels.  Now, as a full-time author, Larry writes Romance / Mystery / Thrillers using the pseudonym John Charles.

His books can be found on Amazon and wherever e-books are sold.