Bio:
Ashlyn Chase describes herself as an Almond Joy bar. A little nutty, a little flaky, but basically sweet, wanting only to give her readers a satisfying experience.

She holds a degree in behavioral sciences, worked as a psychiatric RN for 15 years and spent a few more years working for the American Red Cross.

She lives in beautiful New Hampshire with her true-life hero husband who looks like Hugh Jackman with a salt and pepper dye job, and they’re owned by a spoiled brat cat.

Since 1983 That makes…(counting on fingers, toes, and running out of both…) 34 years

Kind of. I have written a witch series set in Portsmouth called Love Spells Gone Wrong. There used to be a new age store called The Mustard Seed. Now my inspiration has closed. ☹, I like to use a variety of settings. My mass market paperbacks take place in Boston.

Yes and many places I’ve visited. The only place I wrote about and never visited was Romania.

You might be surprised to hear me say Summer, because of the conference I put on in October called Fall in Love with New England, but that’s the truth. I love sunshine and warmth.

Fall was my father’s favorite time of year. I always think of him when the leaves change color and the air turns cool and crisp.

For more information on Ash’s con, check out: www.fallinlovewithnewengland.com!

Ash released a paranormal anthology, Immortally Yours earlier this month. The book includes: 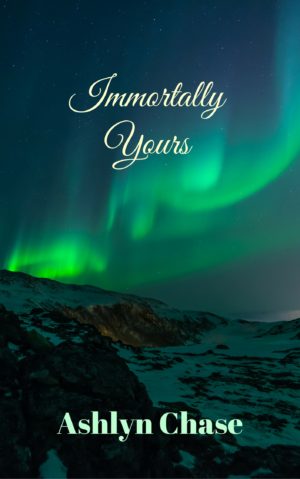 Lizette has spent three hundred years on earth, but this is the first time in a therapist’s office. She feels the life has lost its meaning…and she wants advice on ending it.

Delilah Mills, a navy enlistee, is on the verge of finding true love with the help of her grandmother. The elder Delilah can’t resist the urge to meddle—even if she’s a ghost.

Joshua Sparks, a naval officer, discovers his crush on Delilah is mutual. Now the Navy says they can’t date.

Gabrielle Sparks’ dream job is a nightmare. The only perk for the vibrant extrovert is the hot guy who delivers spring water to the office.

Jose Santiago carries giant water bottles over one well-muscled shoulder. Yet he takes on a superhero role whenever anyone calls for help—especially Gabby.

Lizette had been sitting in the psychiatrist’s outer sanctum for only five minutes when she asked herself, What am I doing here? Just as she rose to walk out, his door opened and a six foot, brown-haired, green-eyed god invited her in.

Upon following Mr. Tall, Dark and Gorgeous into his office, she sank down on a brown leather couch opposite him. He occupied a matching swivel chair. Wishing he would join her on the couch, she tried not to stare—or drool.

He picked up his pen. “What brings you here, Lizette?”

She waved at Dr. Colin Brayer’s Northwestern University medical school diploma, which was on the wall along with numerous other certificates and diplomas. “I know you’re smart as hell, but you can’t possibly understand my problem. I think I made a mistake coming here.” She dropped her gaze to her lap. “This is something nobody understands.”

She glanced back at him. Did he have to sit there in his crisp, white shirt unbuttoned at the neck? He appeared so put together—impossibly tan, young and beautiful. Damn, he was making it hard to concentrate.

“Okay, but only because I’m here. I really doubt you can help.”

“You’ve already made up your mind? Please. Give it a chance.”

Lizette took a deep breath. Was she really about to divulge her secret to a total stranger? A stranger she was paying a hundred dollars an hour to listen to her whine?

Hell, yeah. She wasn’t in favor of wasting money and he was bound by law to keep her secrets to himself, right?

“Will you hold whatever I tell you in confidence?” she asked. “Unless you’re planning to commit a heinous crime, absolutely.”

She hesitated long enough for him to tip his head and eye her suspiciously. “Are you?”

She swallowed hard. “Of course not.”

“You haven’t broken any major laws, have you?”

“What happened was no fault of mine.” She crossed her arms, took a deep breath and spat it out. “I was born in a small village near Lourdes, France—in seventeen-twelve.”

She paused, waiting for some sign of disbelief. The good doctor merely stretched his long legs out in front of him and clasped his hands behind his head as if settling in for a long story before a warm fire on a cold winter’s night.

At least the smile had disappeared. “Go on,” he said.

“If Delilah hears that song one more time, she’s going to strangle Tom Jones with her thong!”

Joshua Sparks pried his sister’s hand off his mouth. “What’s gotten into you, Gabby? It was subconscious and I was only humming. I’m sure Delilah didn’t hear it.”

“Well, hum something else,” Gabby whispered. “Anything but ‘Delilah’.”

Josh tousled his sister’s wispy brown hair. “Why? Are you afraid she won’t move in with us if I hum? Or are you worried about Tom Jones’ neck?”

Gabby had just begun to squeeze his arm when she caught sight of her dear friend, Delilah. She let go and finger-combed her hair back into place.

“So what do you think? Could you live here? With us?”

Delilah glanced toward the hall that led to the bedroom for rent. “I don’t know. The room is kind of small.”

“That’s because the bed is so big,” Gabby said, with a cheery grin.

Delilah fished in her pocketbook and produced a calculator. “How much did you want per month again?”

“Well, we were asking six hundred but we can knock it down a bit—I mean, since you’re a friend of mine.” Gabby shifted her weight from foot to foot.

Josh added, “It comes with heat.” He smiled, wondering if the leggy brunette would add a little heat of her own. Her mixed-race heritage had always fascinated him. Her skin was like milk chocolate and her eyes were a stunning hazel-green. The combination, plus her long wavy hair, could stop traffic.

“Heat’s a big deal, huh? Why? Is this the cold section of San Diego? Make it five-fifty and you have a deal.”

Josh grinned. Delilah Mills would make a delightful addition to the household but there were complications.

“Great!” Gabby embraced her friend in an enthusiastic hug.

She delivered a hard glare in his direction and it was a temptation to bait her. Gabby was so easy. She wore her heart on her sleeve and Josh loved to dangle the carrot for a while. He’d forgo the temptation this time. They needed a roommate and he’d love to see Delilah’s riveting eyes and pouty lips across the breakfast table. He pictured her in a short nightshirt or a clingy satin robe and his pulse pounded. “Sure, when can you move in?”

“This weekend. I just have to pack a few things.” Gabby jumped for joy.

“I hate blind dates, Delilah.” Gabby Sparks doodled on a piece of scrap paper, then propped her feet on the desk as she spoke to her best friend and future sister-in-law. Personal telephone calls at work were frowned upon but that was just one more stuffy restriction Gabby chose to ignore.

“Give him a chance, Gabby. You never know, he might be wonderful. Where and when are you going to meet him?”

“I’m at work now and Josh is picking me up to take me to lunch. He’s supposed to introduce us at the restaurant.”

“Oh, good! That’s not long to wait at all. What are you wearing?”

“Aren’t you supposed to be breathing heavily when you ask that?”

Delilah laughed. “Still crazy after all these months. So how’s the dream job?”

Gabby rolled her eyes. “A nightmare. It sucks. Honestly, you wouldn’t believe what a disappointment this turned out to be.”

Shifting in her seat, she set her feet on the floor and returned to doodling on a message pad. “I’m supposed to be here at eight thirty a.m. sharp. I’m not even awake until The Ellen Show comes on. I have a ten-minute coffee break and they won’t let me leave early even if I work through it.” Rolling her chair to the end of her cubicle, she leaned over and looked both ways to make sure none of the bosses were nearby.

“And lunch hour…don’t get me started. If I’m a few minutes late coming back from lunch and it’s the restaurant’s fault, they still give me the hairy eyeball. Like, what am I supposed to do? Walk out on the check with my mouth full? I should have had Josh’s buddy order for me so I can chow down and get back to work on time.”

The familiar rumble of the elevator alerted her to her brother’s arrival. “Oh, that’s him! I can’t believe I’ve missed my brother so much. I’m actually dying to see him. Don’t tell him that, though. I’ve gotta go, Delilah. Kisses.”

Gabby threw the phone into its cradle and ran to the elevator. As the doors whooshed open she spotted the familiar fit body but he looked like he was hiding behind the floor-button panel. Gabby yanked the sleeve she saw and jumped. Strong arms caught her.

In a strong grasp, he held her off the floor for several seconds while she sighed. Man, she needed this warm hug after months in chillyville.

He cleared his throat. An unfamiliar voice with a slight Spanish accent, said, “You must be very thirsty.”

Oh, my God! Gabby leaned back and stared into the deep, dark eyes of the gorgeous Mountain Fresh Water delivery dude.

Her hand flew to cover her mouth and she dropped to the floor, stumbling backward. As soon as she spotted his grin, she doubled over in explosive laughter.