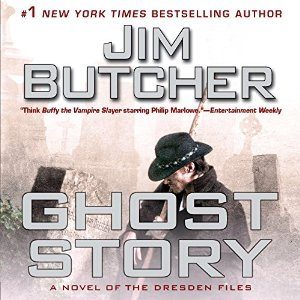 Having been shot and killed at the end of the previous book, Changes, Dresden finds out he’s in the Between, not quite dead, but not alive. Discovering that the “bad guys” somehow cheated when they killed him, he cannot move on until he finds out who killed him and why. So Dresden heads back to Earth as a ghost to solve his own murder; however, he gets caught up trying to save his friends in the process. With his own soul and eternal rest on the line, Dresden must learn the rules of his new existence before his time runs out.

After that somewhat scary ending to Changes, and the gap novella, Aftermath (found in the anthology, Side Jobs), I knew two things: Dresden was apparently dead, and Chicago was being overrun by some bad paranormals due to the power vacuum Dresden created in his battle with the Red Court. I was a bit leery to start this one out of fear I would get some lame ghost story (let’s face it, there have been some big letdowns in favorite series involving the death of a main character), but what I was treated to was a beautifully detailed, complex story that brought together many aspects of the series thus far.

Mr. Butcher successful sold me on not only the mythology behind ghosts in this world, but that Dresden is able to remain a productive investigator and crimefighter. The author creates a whole new set of rules for Dresden that govern spirits, including their use of magic, ability to manifest, and how they interact with both mortals and paranormals. The fact that it was relayed to listeners through Dresden’s own experiences, trials, and errors, made the additional information feel natural, like it was a given all along.

Ghost Story is emotionally difficult in a few ways. First, we witness what has happened to Dresden’s friends, family, and Chicago since his death six months prior. It’s not pretty, especially Karen and Molly. They are changed, and the state of the world is hard and dark. Things are messed up, and it hurts me as it hurts Dresden. Additionally, Harry must come to terms with the choices he made prior to his death. I really enjoyed Harry’s introspections as he contemplated his actions and how he realizes the wrongness and excepts blame, knowing he’d do it all again. I’ve come to love Harry as a friend, and these moments of self-reflection allow listeners to learn more and grow closer; to accept Harry for all his dark and light. It also generally leads to a clue to help propel him forward.

The mystery of Dresden’s murder, together with his attempts to save his friends from some fiendish spirits, is an excellent storyline. More so than ever, Mr. Butcher weaves all the aspects of Harry’s actions into one cohesive life lesson. I love how all the parts tied together by the end, reaching back several books in the process. I just adored the overall ending.

Once again, James Marsters works his magic with the narration. The book was originally released with a different narrator, but due to requests from fans, Audible rerecorded it with Mr. Marsters. I’m so glad they did. Marsters is Dresden, and to change it this late in the game would have been a shock to the system. There were some new nuances to the different characters, most notably Bob, as the characters have all changed in the aftermath of Harry’s death.

In the end, Ghost Story is yet another amazing tale from the Dresden Files, which should NOT be read out of order! Ghost Story was well written, if not a bit long and wordy. There is definitely an air of closure near the end, which gave it the feel of a final book in the series. But fear not, there is more Dresden to come, and I truly look forward to see how everything shakes out in the next title.