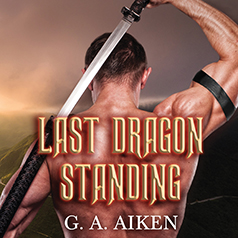 Beginning two years after the conclusion of the previous book, we learn that the dragon-human twins of Queen Annwyl and her mate Fearghus are in danger, and there is a possible coup to overthrow the Dragon Queen, Rhiannon the White. The Queen seeks assistance from her newest ally, Ragnar the Cunning, Dragonlord Chief of the Olgeirsson Horde, a Lightning Dragon. Of course, the Dragon Queen always has ulterior motives in her plans, and this time around, they involve getting Ragnar to “save” and return her youngest daughter, Keita the Viper, to her family.

Last Dragon Standing narrates as an unfolding mystery with multiple subplots. The Dragon Queen is a master manipulator and strategist, and we follow Keita and Ragnar as they are forced to unravel the threads the Queen has knotted together. There are layers upon layers of subterfuge, making the plot utterly engrossing. However, the romance of Keita and Ragnar is more of a side story to the main plotlines, and if you want the same steamy, love stories found in the first three titles, you will be in for a disappointment. This story was more about both the human and Southland Dragon politics rather than a romance. And so much happens. We learn more about a pending war, as well as new enemies and allies. This book takes us into a new chapter in the lives of the characters, and with it comes a new maturity of sorts. It left me wanting for more – unfortunately, I don’t know when Tantor will be publishing more on audio!

I loved learning more about Keita. She’s a complex dragoness, who is equal parts cunning spy and royal princess. She is BOTH roles – not “playing” one or the other. She’s a royal princess snob, but not because she’s stuck up. She honestly thinks she’s being nice or helpful. It’s not fake. She’s that, but also the dangerous spy and protector of the throne.  Ragnar of the Lightning Dragons is the only one who can see and appreciate both parts of Keita. While their relationship takes a LOT of time to develop, their interactions are always enjoyable. I loved watching Ragnar witness and come to realize who Keita truly is. And while Keita doesn’t change in the book, she finds a worthy match in Ragnar, willing to “stick with him” under her own terms.

As the pair become partners in a dangerous mission to protect her dragons’ throne, they treat each other as equals. They grow close. But there still is no swooning or romance. I really enjoy the story, but if you are looking for a lot of romance, this isn’t it. They do eventually give into their mutual lust, but again, it’s not all fireworks and giddy. Keita is her own woman: she itches her scratch and moves on. I really ended up liking how this played out. In the end, they did find their own version of HEA, one that is perfect for this unique pair.

As always, the narration is solid. While I still am not a fan of some of the dragon voices, I’m used to them now, and the stories would sound odd if narrated by any other. Although this time around, the sheer volume of characters, caused me some confusion, and I had to remind myself who was who. The narrator does a solid job, but now that the cast is so large, there are overlaps in who sounds like whom. I did enjoy how Ms. Jackson seemed to get just enough arrogance and annoyance in the male dragons.

In the end, I really enjoyed Last Dragon Standing. It is different from the first three titles in the Dragon Kin series, which is good… each story is unique while maintaining a cohesive set of story arcs. The deepening mythology and political issues for the dragon and human kingdoms is exciting, and I sincerely hope there will be more titles in audiobook format soon!

I know what they see when they look at me. The charming, soft-spoken dragoness bred from the most powerful of royal bloodlines. A disguise stronger than any battle shield that allows me to keep all suitors at tail’s length. A technique that’s worked until him. Until Ragnar the Cunning, handsome barbarian warlord and warrior mage from the desolate Northlands. Unlike those who’ve come before him, he does not simply submit to my astounding charm and devastating smile. Instead, he dismisses me as vapid, useless and, to my great annoyance, rather stupid! Yet I’ll allow no male to dismiss me. Soon he’ll learn my worth, my many skills, and the strength of my will. For this one challenges me enough to make me want to ruthlessly taunt him, tease him and, finally, when the trap is set, bring him to his knees.