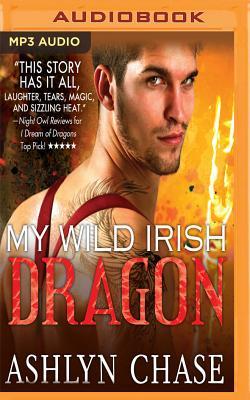 Chloe wants to stay in America rather than return to her solitary life in rural Ireland. She’s worked hard to become a U.S. citizen, and now she wants to help others and her adopted community by becoming a firefighter. As a dragon, she’s well suited for the job. She cannot burn and is preternaturally strong. She just has to learn how to fit in and how not to over do it in front of humans.

Ryan also comes from a family of paranormals-Phoenix shifters. His family is Boston-breed and every male in his huge family is a firefighter. He’s worried about embarrassing or disappointing his family if he doesn’t make it at this particular firehouse. Oh and by the way, the chief is his father’s best friend.

Chloe and Ryan go out for the same position within the fire department, but since both are so well-qualified, the chief finds the funding to hire both. Although the competition for the job is off the table, the pair continue their little rivalry during training. However soon the pair learn to respect the other, become friends, and fall for one another.

I found myself liking My Wild Irish Dragon right from the get go. I enjoyed the premise of two noble paranormals trying to make a difference in their community. I also liked how each fell for the other without knowing exactly who, or what, the other was. Of course the attempts to hide their paranormal status from the other made for some fun laughs. I also loved how Chloe’s innocence and lack of modern upbringing allowed her to be more open with Ryan. Although they have a rocky start, the author does a great job bringing each around in his/her own way. Their relationship development felt honest and deep.

While I also enjoyed the several side characters and supporting family members, I didn’t care so much for Chloe’s cousin Aiden and his storyline. His misogynistic attitude and overbearing presence just annoyed me. And when he did something so completely against Mother Nature’s rules, I was shocked that there were no repercussions at all. It felt completely out of character for Gaia as presented in the story. Additionally, while I appreciated that the “I Love You’s” weren’t right at the conclusion of the book, the ending (about 2 hours) was a continual back and forth over what to do with their future and the family duty. I needed the couple to just make a decision.

I really enjoyed the narration by Felicity Munroe. Her Boston and Irish accents were genuine and well performed. I like how she used a neutral female narrator across the board, only altering the voices for each speaking part. She had a great range of unique voices, each well-suited to the individual character.

In the end, I enjoyed My Wild Irish Dragon as narrated by Ms. Munroe. While I could tell the book was only one in a much larger world, I never felt lost or confused. I certainly plan to pick up the next title in Ms. Chase’s Boston Dragon series.

My Rating: B
Narration: B+

Dragon shifter Chloe Arish is hell-bent on becoming a Boston firefighter. She uses her Irish charm and fake documents to score an interview, knowing she has to work every bit as hard as a man-harder if she wants their respect.

Born into a legendary Boston firefighting family, phoenix shifter Ryan Fiero can’t possibly let someone best him on the training course or the job. He’d never hear the end of it. When a feisty new recruit comes along who’s determined to do just that, Ryan plots to kick her out-until their sizzling chemistry turns explosive…