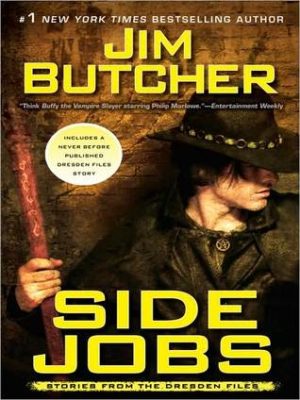 After the cliffhanger-esque ending of Changes, I wasn’t sure I wanted to sift through a “side story” rather than going straight to the next book to find out what becomes of Harry. However, I am so glad I took the time to listen to this wonderful anthology from the Dresden Files. The book contains a set of mostly previously released short stories and novellas, ranging chronologically from before the first Dresden book up to a brand new story that takes place after the conclusion of Changes.

The stories cover a variety of subjects and star a range of characters. All but two of the stories are shared from Dresden’s traditional point-of-view, some more humorous than others. I loved seeing Harry react as Harry would in different settings and shorter, less dark adventures. Additionally, much can be learned about those side characters Harry considers friends and family.

While it’s very difficult to pick my favorite of the bunch, the two stories not told from Harry’s POV stand out the most. The first is “Backup,” a novelette told from Thomas’ POV, where he must protect Harry from an ancient evil, without Harry knowing he was doing it. The story shares Thomas’ struggles with his vampire monster, and the reader glimpses how much Thomas actually feels under his tough guy, nonchalant persona.

The other highlight in this anthology is the final, all-new novella, “Aftermath.” Told from Karen’s POV, we find out what happened the hours after the shocking conclusion of Changes. No only was the story extremely adventurous and exciting, but the emotional content was powerful as Karen and Harry’s friends deal with Harry’s disappearance.

Each story is narrated by the fabulous James Marsters, who gets kudos for maintaining consistent voices for a wide range of characters, taking place over the course of several years. I especially enjoyed his work in the two stories not told from Dresden’s POV.

Side Jobs is an amazing treat for fans of the Dresden Files and it SHOULD NOT be overlooked and passed by for the full-length titles. While one could read/listen to it at anytime after Changes (if one wants to avoid spoilers), the timing coming after Changes was ideal. It was a great way to review Dresden’s history and life thus far, because things are going to be much different for Harry from here on out.

My Rating: A
Narration: A