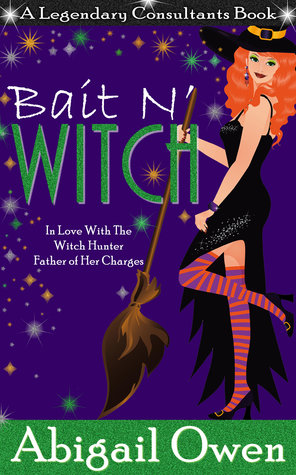 Gikany and Una enjoyed the latest story in the Legendary Consultants series.  Greyson and Rowan’s story was compelling and filled with humor and passion.  Although the novel has a lighthearted feel, neither the passion between Greyson and Rowan, nor the anxiety of the plot as Rowan tries to hide her identity while also trying to protect Greyson’s triplet daughters, is diminished.

We were introduced to Rowan in the previous novel.  She was the unfortunate witch forced to do the bidding of Kaios.  Now the Mage High Council has their top enforcer, Greyson, hunting her down.  When Rowan turns to Delilah for help, she decides to have Rowan hide in plain sight.  Which is how Rowan finds herself the new nanny to Greyson’s out of control teenage triplet daughters.  As crazy and clichéd as it sounds, it works.  The mystery of the girls’ powers, the hunts for Rowan, and the attraction between Greyson and Rowan all weave together through the story creating a nicely balanced plot.

Rowan needs to hide from the Mage High Council for more than just her role in Kaios’ plot.  She has secrets she must hide, not only about her own abilities, but also her training.  Rowan is innately a good witch, and we really loved how she did her best to be a good nanny.  Her genuine care for the girls was sweet and we enjoyed the honest relationship that developed between them.  We also liked how Greyson and Rowan’s relationship wasn’t forced but slowly built.

Although the novel is short, the story is rich and completely satisfying.  We are intrigued by the ending and continue to wonder about what and who Delilah is.  Hopefully she will get her own happily ever after story.  If you enjoy lighthearted but passionate fantasy romance, you might just want to pick up the Legendary Consultants series.

In love with the witch hunter father of her charges…

Rowan McAuliffe has been hiding most of her life. Secretly trained in her powers by an unusual source, she’d been taught not to trust anyone. Especially other witches. However, after she was forced to perform a hateful act against her will, she now hides from the Mage High Council who seek answers, and possibly her life.

Greyson Masters is the Council’s best enforcer–a witch hunter who lays down the law. Despite the danger of his job, Greyson is also raising his triplet daughters. Alone. Budding new witches who display an alarming combined power no one understands. Too bad he hasn’t got a clue how to deal with them.

Little does Greyson realize that the new nanny sent to him by Legendary Consultants is the very witch he is hunting. When the truth is revealed, can these two opposing forces find a way to listen to their hearts? Or will Greyson have to follow orders and kill Rowan–the one woman who has made his soul come alive?.