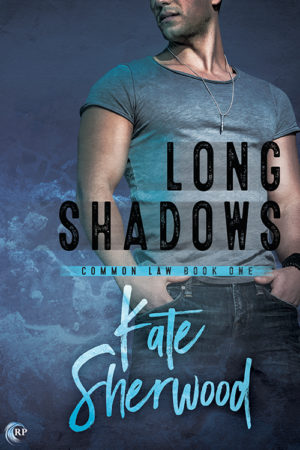 Jericho Crewe spent more than a decade trying to shed his past and the legacy of the father who drove him away. Though he lost a lot in the attempt, his new life in LA has made leaving his best friend and lover behind worth it. Mostly. But, a single phone call is enough to bring him running back, and, despite his efforts to reinvent himself, he quickly learns that home won’t let go so easily.

I found Long Shadows interesting in many ways, not the least of which is its main character, Jericho Crewe. He’s at once resilient, uncertain, loyal, stubborn, independent, compassionate, and so on. He’s also dealing with a sizable case of denial when it comes to being back in Mosely, Montana, and Wade Granger, in particular—which I thought were some of his best moments. While he didn’t leave as vivid an impression on me as Wade did, I think Jericho has a lot of potential to develop over the course of the series, and am looking forward to seeing how he handles his new situation.

My undeniably favorite thing about Long Shadows is the re-acquaintance of the two main characters. Rather than bogging the narrative down with regret, most of the scenes involving Jericho and Wade are touched with awareness, companionship, and a nostalgic fondness that reaffirms their story isn’t nearly as finished as Jericho would like to think it is. I’ve read a good many tales where the temptation that exists between reunited characters is laid out plainly, but this is one of the few that actually made me believe it.

While it’s a somewhat familiar situation in different genres, the author doesn’t use the “desperate times call for legal infractions” sort of economy that’s present in Mosely, Montana as the cause of every bad thing that happens in the story. But, neither is it a blanket excuse for it. Rather, most of the characters walk a wobbly line between convenience and necessity when it comes to the law, and I found that ambiguity perfectly acceptable in Wade and Kayla’s cases, in particular.

Another great thing about Long Shadows is that there’s so much more to it than any of the relationships that are involved. It is a suspenseful narrative that involves different government agencies, as well as local law enforcement, secrets and cover-ups, covert alliances, and a solid application of the unspoken knowledge that tends to run beneath the surface in forgotten places. Though some elements were easy to see earlier in the story, its culmination wasn’t what I was expecting, making the entire plot even more enjoyable.

Having never read a story by Kate Sherwood before, I wasn’t sure what to expect from Long Shadows, but I ended up enjoying it a great deal. Whether by the cover or the characters or the overall plot, I was drawn in from the beginning, and stayed engaged until the very end. That this is the first of the series is certainly a bonus, especially since I can’t help but be eager to see what might happen next for Jericho and Wade. If the rest are equal to Long Shadows, I think this is going to be a fun series.

LA cop Jericho Crewe got the hell out of Mosely, Montana, when he was seventeen. Fifteen years later, he’s back, and everything is just as messed up as when he left. He planned a quick visit to deal with his injured father, but of course things are never that simple. Family complications, police complications, social complications—and, as always, Wade Granger complications.

Jericho and Wade had been so close, once upon a time. First friends, then more than friends—and then, after Jericho’s escape, nothing. Wade’s magnetism hasn’t been lessened by a decade and a half apart; even when Jericho learns that Wade is the prime suspect in the death of Jericho’s father, the old connection still sparks.

When Jericho’s newly discovered half siblings are kidnapped, he needs to trust someone to help him find them. Wade’s a terrible choice, but Jericho’s never been known for his good judgment. Anyway, he’d rather make a bad decision with Wade than a good one with anybody else.

Kate Sherwood started writing about the same time she got back on a horse after almost twenty years away from riding. She’d like to think she was too young for it to be a midlife crisis, but apparently she was ready for some changes!

Kate grew up near Toronto, Ontario (Canada) and went to school in Montreal, then Vancouver. But for the last decade or so she’s been a country girl. Sure, she misses some of the conveniences of the city, but living close to nature makes up for those lacks. She’s living in Ontario’s “cottage country”–other people save up their time and come to spend their vacations in her neighborhood, but she gets to live there all year round!

Since her first book was published in 2010, she’s kept herself busy with novels, novellas, and short stories in almost all the sub-genres of m/m romance. Contemporary, suspense, scifi or fantasy–the settings are just the backdrop for her characters to answer the important questions. How much can they share, and what do they need to keep? Can they bring themselves to trust someone, after being disappointed so many times? Are they brave enough to take a chance on love?

Kate’s books balance drama with humor, angst with optimism. They feature strong, damaged men who fight themselves harder than they fight anyone else. And, wherever possible, there are animals: horses, dogs, cats ferrets, squirrels… sometimes it’s easier to bond with a non-human, and most of Kate’s men need all the help they can get.

After five years of writing, Kate is still learning, still stretching herself, and still enjoying what she does. She’s looking forward to sharing a lot more stories in the future.

To celebrate the release of all four books in the Common Law series, Riptide Publishing is giving away one four-tour-wide GRAND PRIZE of $100 in Riptide credit! Enter at each stop on each tour (once they go live) to maximize your chances to win! Leave a comment with your contact info to enter the contest. Entries close at midnight, Eastern time, on April 8, 2017. Contest is NOT restricted to U.S. entries. Thanks for following the Long Shadows tour, and don’t forget to leave your contact info!