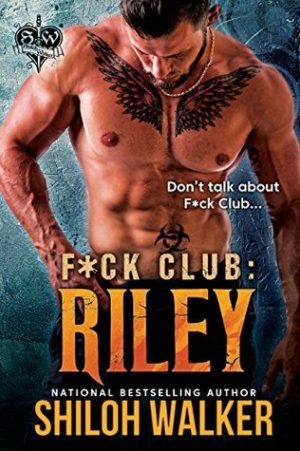 Here’s the thing with Shiloh Walker books. They’re tough, gritty, and they rip your heart out. But, dammit. Those characters work for every ounce of happily ever after they get. F*ck Club: Riley is no exception.

Riley has been the adult of his three siblings for entirely too long. After his parents’ sudden death, he put his life on hold to take care of his brother and sister. He did a lot of things to make ends meet and to pay off the debt left in their parents’ wake. Some were more… lucrative than others. And also illegal. But he’s always been in love with Bree.

Bree—what we learn of her from Riley’s point-of-view—is a victim of circumstance. The girl should’ve dug herself out long before this point, but when someone is being emotionally abused and feels as though they’re worthless, there’s not much to look forward to. And no reason to leave. Until something catastrophic happens.

Here’s the deal with this book. They both need to spill their guts. The information each has is sensitive, and both parties feel like it would change the perception of the other person toward them. Admitting one’s weaknesses and shortcomings—and naming their demons—are the most intimate types of conversations to have with someone we love.

Those sensitive to domestic violence—verbal, emotional, and physical abuse (although the violence itself isn’t described in detail—but we see the aftermath) may want to skip this one.

Ms. Walker ripped my heart out, rubbed salt in the wound, stomped all over the still-beating organ, and re-inserted the bruised muscle before stitching me closed without anesthesia with F*ck Club: Riley. I really want more books in this series—I see two more coming…and can’t wait for Shame’s.

“The first rule of F*ck Club…we don’t talk about it. We just do the job and get paid.”

And Riley Steele did his job very well. He’ll be the first to admit that his current life isn’t the one he’d foreseen. It’s not even one he really wants, but after his parents died and he was left to care for two siblings and a mountain of debt, he was willing to do almost anything.

Now, after almost ten years of being paid to pleasure, he’s almost numb to it…and to women.

That all changes with one phone call. Brianna Sharpe, the girl he’d loved as a boy, is leaving an abusive lover and needs someplace to hide.

Opening his home to Bree is easy. Protecting his heart is a different story. She’d completely shattered it once already. But Bree has changed and Riley wants to think there might be a chance. Only…what will she do when she discovers his secrets?

One response to “Review: F*ck Club: Riley by Shiloh Walker”