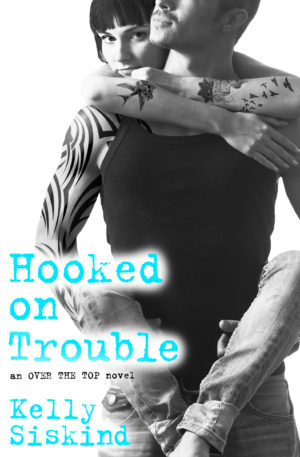 It’s been sixteen months since Raven and Nico shared something special that fateful night in Aspen, and now that she’s living in his city, she needs to forgive his broken promises and move on. With a fresh start in Vancouver, Raven plans to find a job she loves, start a planning business with her two best friends, and find her older sister, Rose, who left home 17 years ago when Raven was only nine.

Nico acknowledges that Raven has every reason to be pissed and hold a grudge after he promised not to hurt her back in Aspen, yet he walked away without an explanation. He desperately wants her and needs to get her alone so he can tell her about his family’s troubles and why he broke his promise. And maybe this time, they can explore and deepen that special connection they both felt.

After absolutely loving the first two books in Ms. Siskind’s Over the Top series (A Fine Mess is my favorite read of 2016!), I was eager to read Raven and Nico’s story. Unfortunately, Hooked on Trouble became the victim of too much anticipation and unfair expectations on my part. While I enjoyed the book, it just didn’t grab me like the previous books did, and I found myself unfairly comparing the other couples’ stories to Raven and Nico’s tale.

Even with my frustrations, there were many things I enjoyed about Hooked on Trouble. What I did love was the unadulterated attraction Nico and Raven shared. It went well beyond physical. They both knew right from the get go in Aspen they had a connection that was special. I liked how open they were together; the sharing makes their relationship special and unique. I loved that Raven could not hold on to her anger when Nico was around her. I also liked Nico and his family. Ms. Siskind uses his interactions with his mom, brother, and sister, as well as his inner-monologue, to showcase the type of guy he is, including his own fears and insecurities.

While not fair, I couldn’t help compare but Raven and Nico to the previous couples; however, Nico and Raven are DARK with DARK histories. They are not light and silly. They are sarcasm and tattoos. I think this darker side and seriousness weighed down the story too much. While I adored their chemistry and their cutsie moments, and at times was sucked into their intense passion, I felt more times than not, I was being told how they feel, rather than experiencing it along side the first person narrative.

Unfortunately, I never got behind Raven. The author did a great job building the case that Raven needed to find her sister and seek forgiveness. I understood her drive to find her “unconditional love,” which blinded her to what she already had. But I don’t understand how Raven could make so many stupid decisions: from seeking out her sister without Nico to ignoring her own intuition about situations. However the absolute worst was when she discovered something of her sister’s and put it in Nico’s empty apartment. I seriously got so angry at Raven for making such a stupid decision. While Raven was quick to remedy this situation, the damage was done. I was not ready to forgive Raven.

In the end, while I struggled with Raven’s actions and never really felt connected to the pair until almost the end of the book, I still enjoyed Hooked on Trouble. I fear my expectations ran too high, resulting in mild disappointments as I read the book. OR maybe Nico and Raven just never spoke to me because I could not relate to their individual characters. Regardless, the series is amazing, with each romance unique and enjoyable, there is certainly something for everyone, and I highly recommend reading the entire Over the Top series. And I look forward to more stories from this talent author!

My Rating: B/B-, Liked It, but I had a few small issues

The last time Raven did “real” was sixteen months ago, when she spent one unforgettable night with the tattooed, impossibly sexy Nico, and then he disappeared the next day. Since then, she’s kept her guard up and her feelings to herself. She doesn’t have time for relationship drama when she’s busy searching for her long lost sister.

Nico hasn’t stopped thinking about Raven—her sultry curves, inked skin, and the fact that he ditched her after their night together. Now that they’re living in the same city, he knows this is his chance to make things right. What better way to prove to Raven he’s for real than helping her find her sister? But when the lines between right and wrong start to blur, putting his job on the line, Nico has to decide if the risk is worth the ultimate reward.