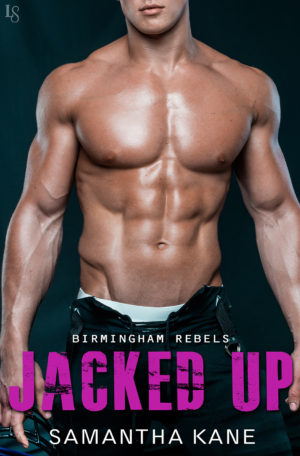 Living out his dream of playing pro football, Sam signs on with the Birmingham Rebels after returning from a tour in Afghanistan. Sam, who suffers PTSD, hasn’t been with a woman since his return home over two years ago out of fear sex will trigger his nightmares. Best friend and teammate King only wants what is best for Sam and thinks helping him get laid will help him get over his fears. Heading to the shore for some fun, the pair meets Jane Foster, the perfect girl for Sam. Sam and Jane are completely attracted, but Sam will only have sex with her if King is in the room, to stop him if he starts having nightmares. With Jane on board, the couple has the best sex of their lives, especially when they involve King in the action. However, that was just for one night, and the guys and Jane go their separate ways. Fast-forward to the fall and the Birmingham Rebels are struggling. But an accidental run-in with Jane sparks a fire inside Sam, changing his outlook on life and football.

Jacked Up is the third ménage in the Birmingham Rebels series. By now, most of the team embraces the non-conforming relationships and sexuality of the players and coaches, although those outside the team still aren’t as accepting. This openness affords this particular trio the ability to speak more openly about their desires, making the story less about the social issues and more about the individual fears and concerns. I felt that the book was better because the story wasn’t as focused on breaking taboos. Even Sam’s doctor tells him no one cares who he sleeps with.

Reading the story from all POVs (Sam, King, and Jane), together with the open and honest dialogue, made me love the characters. I loved how Jane wrestles with what she wants and feels when she’s with Sam and King, instead of what she thinks she should like and how she should act. We’ve all experienced something like this, probably not in the bedroom, but in some aspect of our lives. This is why I can relate to Jane. She is someone who feels like she’s losing control and doesn’t know how to process it. Likewise, Sam learns to embrace what happened to him and accept he is a survivor. Watching him come to terms with his memories, coupled with his feelings for both Jane and King, was almost inspirational. Meanwhile, King is such a calming presence and great friend. He’s the glue that holds the fledgling ménage together. He knows when to push and when to hold close.

While it wasn’t really an “issue” for me, the overwhelming and over-the-top support of Jane’s parents and King’s mom felt too ideal. I appreciate that the author has created a world where ménages are more accepted, and a football team where bisexuality is commonplace; however, the positive support still felt a tad unrealistic. But the message was great, regardless.

In this fictional world where the Birmingham Rebels are an NFL expansion team and the world is more accepting of sexual differences, King, Sam, and Jane fit perfectly. Their story resonates because they are normal people with normal fears. Their openness and honesty are what makes them work and creates such a lovely romance. I thoroughly enjoyed their story and look forward to see what Ms. Kane will bring readers in the next Birmingham Rebels title.

Linebacker Sam Taylor feels like a ticking time bomb. He left the army with emotional wounds as fresh as the scars on his back. Sam’s been living like a monk, but his best friend, defensive lineman King Ulupoka, wants to get him laid. Easy for him to say. The larger-than-life Samoan is a hard-bodied, tribal-tattooed fantasy. Sam agrees, under one condition: King stays to watch.

ER nurse Jane Foster is done being a good girl, and nothing says wild like picking up two of football’s sexiest players and bringing them back to your hotel room. Trouble is, she can’t decide which one she wants more. Sam is hot, sweet, and vulnerable. Jane’s more than willing to ride him into oblivion. But King’s intense gaze from across the room promises that the best is yet to come.

Sure, King has had his choice of girls and guys in the past. That doesn’t mean he’ll jeopardize his relationship with Sam over a case of locker-room lust—until a naughty nurse pushes them both out of their comfort zones. Seeing Jane and Sam together turns King on more than he ever imagined. If they’re game, he’s ready to tackle a three-way play.