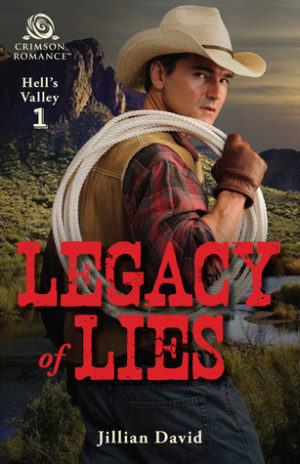 I have found something new!  When I picked up Legacy of Lies it was with the understanding that it was going to be something different.  A paranormal western – that’s right, never thought to put those two words together.  However, Ms. David makes them fit and I enjoyed it!

Legacy of Lies is the first book in the Hell’s Valley series.  From my research to put this review together, it seems it is spin-off from another series that I’m completely unfamiliar with.  That being said, I do not feel I missed out on anything.  The story of Garrison and Sara stands well on its own.  Thought it had the feel of a first novel, some of the mythology is a bit shadowed, but I expect these things will begin to be explained as the series progresses.

I liked Sara and Garrison, they fit well for being opposites.  He is an uber-gruff alpha male while Sara is in contrast soft and gentle.  But she is no push over!  I enjoyed how she made Garrison work for it.  Especially those moments where he would stumble over his words to convey those pesky feelings, his male blundering was a bit endearing.  For all of Sara’s softness, she has a spine of steel, working hard and makes the tough decisions to do what is right.  They truly complement each other and deserve their happily-ever-after.

The plot flows pretty well thought not entirely smoothly.  It took me a minute to realize that western didn’t mean historical.  This is a modern western…  I’d like to say it is a rural fantasy as opposed to urban.  The mythology was intriguing though we are still much in the dark.  I like that the family may have these psychic gifts but they exact a price for their use.  I look forward to learning more about Garrison’s siblings.  I will say that even though Garrison thwarts the enemy at the end, I still do not understand all the forces at work (though I suspect).  I hope we will learn more in the next novel.

I am surprised by how much I enjoyed this novel.  It is not heavy into the paranormal aspects, but it was a nice introduction to the world.  I have a feeling things will thicken from here.  Legacy of Lies was an intriguing new start to the Hell’s Valley series and I look forward to the next novel.

Garrison Taggart doesn’t have time to deal with touchy-feely junk like “trust issues” or “feelings.” His dad’s health is waning and the family’s Wyoming ranch is being sabotaged. Too bad his supernatural ability to tell when someone is lying has been exactly zero help in ferreting out the betrayer so far. So, when sweet schoolteacher Sara Lopez raises concerns about his son being bullied, who can blame a guy for getting a little testy?

The last thing Sara needs is any more attention or gossip after her recent breakup with big-shot rancher Hank Brand. So her attraction to surly but sexy Garrison, Hank’s rival, is entirely unwanted. When she uncovers an insane plot to kidnap the Taggart boy and throws herself in harm’s way to protect him, Garrison must risk his deepest secret and his own life to save the people he cares for the most. But will his heroics cost him everything?

One response to “Review: Legacy of Lies by Jillian David”