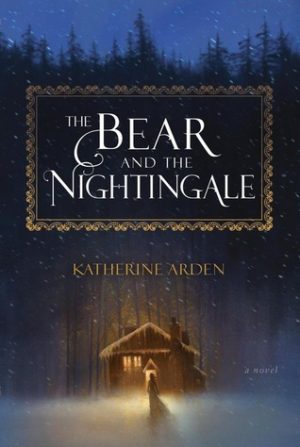 The Bear and the Nightingale
Author: Katherine Arden
Reviewer: Nima
Rating: A

The Brothers Grimm appropriated many of their classic fairytales from tales handed down all over the world.  Stories told to entertain, scare children into good behavior, and make us believe in magic.  Just maybe, with a little help from our fairy godmother, things might turn out alright.

My favorite Russian fairytale growing up was the Twelve Dancing Princesses.  (It’s deceptive and a little morbid in retrospect, but there’s no accounting for logic or taste in a seven year old who wanted to stay up all night and dance.)  Maybe it was the extremely long and extremely harsh winters, but Russian fairytales are made up of extremes in color, fantasy, violence, and a pantheon of characters which have so much personality, in and of themselves, that they seem to wander in and out of each other’s stories.  The Bear and The Nightingale is an amalgamation of multiple tales and characters into one, cohesive story. Author Katherine Arden has clearly done a great deal of research to craft an original story which stays true to the Russian roots of each character.

I read The Bear and The Nightingale next to the fire over a couple of cold, snowy days. Even if I had read it in the heat of August, I still would have felt the bitter winds and deep snow drifts that fueled the story’s action and motivated its characters.  Arden’s writing is expressive and languid.  That slow pace and focus on multiple characters at once will not appeal to every reader.  My largest criticism was the seemingly random use of multiple Russian words, including nicknaming and renaming of core characters. There is a glossary in the back, but if you stop and flip back and forth to look words up, it breaks the flow of the story. Most of the time I just took them contextually.

You can’t have winter without Jack Frost and he is right at that beginning of the book as part of a story within a story.  The Russian version of Jack Frost “Morozko” is sadly no boyish, Chris Pine from Rise of the Guardians, but not as old as Robert Pine either—more like Michael Shanks.  (Sorry, I’ve been binge watching Saving Hope.) He’s written here as a mature character, but appealing.  We get the sense that because he’s timeless, he could appear as any age.  Even though we don’t see him again until near the end, his presence is felt all the way through.

Vasilisa, our heroine, is a wonderfully unpretentious character.  She’s just not ruffled by anything, however odd it may be.  Talking to house spirits and horses is as natural to her as talking to her family members.  She pushes back against limits, but in her heart always wants to do the right thing. Truly, she is her mother’s daughter and at home in her wild surroundings of northern Russia.

The Bear and the Nightingale is not a romance.  Marriage is largely a pragmatic thing in this harsh world, consolidating power and keeping secrets.  The difference between lust and love is contrasted through the lives of this ensemble of characters and manifest in many ways.  The symbolism was beautifully done and not pushed in the reader’s face, letting them take what they will from the consequences of each character’s choices.

There’s a rumor floating around that this will be the first in a trilogy.  While the story does have a solid conclusion, there are many unanswered questions that I look forward to seeing Arden address.  While we’re waiting, there is a prologue on Arden’s website that you shouldn’t read until after you’ve read the book.

At the edge of the Russian wilderness, winter lasts most of the year and the snowdrifts grow taller than houses. But Vasilisa doesn’t mind—she spends the winter nights huddled around the embers of a fire with her beloved siblings, listening to her nurse’s fairy tales. Above all, she loves the chilling story of Frost, the blue-eyed winter demon, who appears in the frigid night to claim unwary souls. Wise Russians fear him, her nurse says, and honor the spirits of house and yard and forest that protect their homes from evil.

After Vasilisa’s mother dies, her father goes to Moscow and brings home a new wife. Fiercely devout, city-bred, Vasilisa’s new stepmother forbids her family from honoring the household spirits. The family acquiesces, but Vasilisa is frightened, sensing that more hinges upon their rituals than anyone knows.

And indeed, crops begin to fail, evil creatures of the forest creep nearer, and misfortune stalks the village. All the while, Vasilisa’s stepmother grows ever harsher in her determination to groom her rebellious stepdaughter for either marriage or confinement in a convent.

As danger circles, Vasilisa must defy even the people she loves and call on dangerous gifts she has long concealed—this, in order to protect her family from a threat that seems to have stepped from her nurse’s most frightening tales.