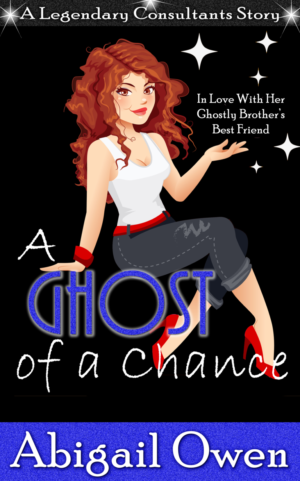 This is a short and sweet story about Josey and Brice and what is really a second-chance at romance.  We haven’t met these characters before in the series, but their story is a quick and fun read.

Gikany and Una liked that Josey and Brice had a history.  It made their connection and journey that much more believable.  The fact that Josey tries to hide her abilities (because who would believe she sees ghosts) makes sense, especially considering how sensitive she is.  Though it was short, we did enjoy the chemistry and romantic romp between them.  The plot of finding and saving Josey’s brother was compelling and we enjoyed the banter and humor of it.

Though the ending was a bit abrupt, we did enjoy this story and look forward to more in the series.  If you enjoy some light-hearted paranormal romance, this might be the series for you.  A Ghost of a Chance would be a great introduction. 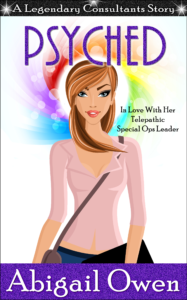 Psyched was a quirky little novella about a translator who hears more than you think and things she shouldn’t.  Gikany and Una liked this paranormal lighthearted cloak and dagger thriller.

Quinn is an interesting woman.  As a psy she can understand any form of communication.  While working as a translator she overhears the discussion of human trafficking, but not just any humans, gifted humans like Quinn.  Through Delilah (the owner of Legendary Consultants) Quinn connects to a group that will hopefully thwart the plans of the traffickers and save those imprisoned.  Quinn was once a victim of people like that and she decides to do whatever she can to help.

Daniel Cain is the leader of the (extra) special forces group that will work to bring down the trafficker’s ring.  The paranormal abilities that the four men have all compliment each other making them an effective team.  With Quinn’s help, they should be able to discover the location of the ring and bring them down.  However, plans never go as easy as planned.  Yet with the increasing connection between Daniel and Quinn, they won’t rest until they can thwart the bad guys.

We liked the connection between Daniel and Quinn.  Though there are a few quirky plot points, the story overall flowed well and ended nicely.  We really enjoyed their journey and the overall plot of the traffickers.  If you haven’t tried the Legendary Consultants series yet, this might be a fun novella to give the series a try.

A Ghost of a Chance (Moon, Mist, & Magic anthology) – 60 pages
What’s a girl to do when her brother’s ghost appears asking for help? If that wasn’t bad enough, finding her not-dead-yet brother’s body before he becomes permanently spectral isn’t her only problem. Josie can’t save him on her own. The only person who can help is the last person who would want to. Bryce Evans, a man she once wrapped hopes of her future around, can’t stand to be near her. How can she convince him when her evidence is a ghost he can’t see?

Psyched (Good Things anthology) – 65 pages
Quinn Carson’s unique ability lands her in a heap of trouble when she overhears something she shouldn’t. Enter Daniel Cain and his unusual special forces team of telepaths, hell bent on bringing down the supernatural trafficking ring she stumbled upon. Drawn to Cain despite her better judgement, Quinn decides to help, risking her own life–yet again. But will this become a case of no good deed goes unpunished?