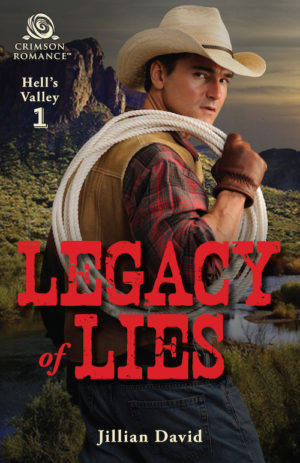 One boot toed the gravel. “You think we could try another dinner together sometime?  Minus the dumbass?”  Sara’s heart stumbled two beats. “Like a date?” she blurted. “Even after what Hank—”

Garrison grimaced. “Anything that man says, I tend to think the exact opposite. He’s not worth the oxygen wasted to speak his name.”

Puffs of vapor drifted up between them as they breathed. “So, then,” he said. “Dinner later? A … date?”

“Uh, sure. Yes.” Typing his number, she texted him her info. Her stuttering heart continued to trip along. There wasn’t much to do, but she didn’t want to leave. Not yet. The silence stretched for too long.

He tilted his hat up an inch with his thumb. “I’d like to give you a kiss good night, if you’d oblige.”

Back on its feet, her heart now scampered in place. “Okay,” she whispered.

He moved forward until his body heat reached her exposed face and neck. The scent of good food, leather, and hardworking man blended in a heady mixture. “It’s been a while, so I may be rusty.” His low voice sent jolts of anticipation down her spine.

Her lips waited, just a few cruel inches away from his mouth … was this some kind of evil torture? Would she have to wait, a millimeter from heaven, while she froze to death? No thank you.

Never let it be said that Sara couldn’t take charge of an iffy situation when the chips were down.

Or help knock some rust off a fellow.

She grabbed his sheepskin and leather jacket lapels, yanking him toward her as she stood on tiptoes.

When their lips met, a zap of holy wow shot clear to her feet, then returned to settle in her pelvis, swirling in the most delightful way. The heat from his mouth flowed like warm liqueur through her body. After a moment, her calves protested the height difference, and she staggered back a step. Her hands remained clamped onto his jacket.

She licked her lips, her taste buds instantly craving more of his spicy male essence. A comparison between the taste of his lips and the rest of his body would be fine, too. “Yes, well. So there you go, no more rust. Like riding a bike,” she babbled.

With difficulty, she unclenched her hands from the crushed jacket lapels, then smoothed the worn leather, like it was a suit coat. A flash of desire hit her. Oh, baby Jesus, what would this man look like in a suit? With those shoulders?

When he leaned down, his stubble brushed her cheek, sending ticklish, delicious sparks skimming over her skin. “I might need more practice.” His breath slid up her jaw and drifted over her ear.

He wrapped his leather-clad arms around her upper back and waist and pulled her close again, this time dictating the timing and pressure of the kiss. Had she thought his mouth hard and cruel before? Because right now, his strong and soft lips sent flickers of excitement right into her own mouth.

When he tugged her flush against him, even through their coats, she sensed the iron muscles of his torso, flexing as he adjusted his stance. She melted against him. Despite their difference in height, they fit perfectly.

Moving his mouth into a fabulous new angle, he stroked with his tongue until her lips tingled.

In the name of the Holy Spirit, amen. This guy kissed like a pro, his kisses a perfect mixture of gentle and possessive.

Rusty? Out of practice? She’d love to bear witness to his expertise when he regained proficiency. Kisses any better than these could kill a woman. Dead.

She floated for what seemed like hours, cocooned in his steady arms, and savored the sensations that arose beneath his ever-changing lips. Just when she got used to one angle, he shifted and nudged her mouth open for more. The confident strokes of his tongue and nips of his teeth made her toes tingle.

When one of his hands snaked up into her hair and massaged her scalp, every muscle in her body short-circuited. For the first time in her life, her knees nearly gave out on her. Amazing.

After minutes—hours? days?—he pulled back. “Wow,” he said. Vapor from his breaths created puffs in the winter air.

Was he breathing as quickly as she was? “Well. This has to be the best parent-teacher meeting, ever,” she said. The vibration of his answering chuckle rolled through her ribcage, making her breasts perk up and take notice. “I believe this is the part where I tell you I’ll call you?” Dazed, she managed to respond, “Only if you mean it.” Crap. Dumb answer.

Even dumber? The part where she wanted to hang out with him more. Stupid idea, if she wanted to protect her job and her loan payment, given that her boss’s family hated Garrison’s. Hey, it was just his phone number. No requirement to answer. That’s what caller ID was for.

He whipped his hand around to the back of her neck and planted one more toe-tingling kiss, followed by a playful nip that removed any question of his intention to call.

Okay, maybe she would consider one more date. Then she would stop. Because work. Life plans. Things that didn’t involve a sexy rancher.

With a sheepish grin, he opened her car door and stood there while she turned the ignition. Once she’d closed the door and put on her seat belt, he stepped back.

It took every ounce of willpower not to touch her lips until she had pulled onto Main Street. Or circle back and beg him for more yummy kisses.

Garrison Taggart doesn’t have time to deal with touchy-feely junk like “trust issues” or “feelings.” His dad’s health is waning and the family’s Wyoming ranch is being sabotaged. Too bad his supernatural ability to tell when someone is lying has been exactly zero help in ferreting out the betrayer so far. So, when sweet schoolteacher Sara Lopez raises concerns about his son being bullied, who can blame a guy for getting a little testy?

The last thing Sara needs is any more attention or gossip after her recent breakup with big-shot rancher Hank Brand. So her attraction to surly but sexy Garrison, Hank’s rival, is entirely unwanted. When she uncovers an insane plot to kidnap the Taggart boy and throws herself in harm’s way to protect him, Garrison must risk his deepest secret and his own life to save the people he cares for the most. But will his heroics cost him everything?