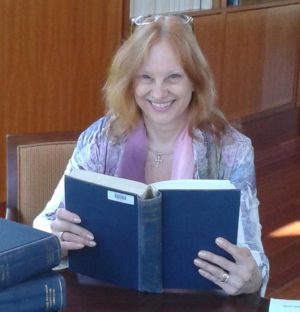 I’m a self-confessed history nut, my favorite eras being Medieval and Renaissance England, and all American history. I’ve written several novels set in England and the U.S., two time travel romances, a vampire romance, and an urban fantasy, FAKIN’ IT which received a Top Pick award from Romantic Times. I’m a longtime member of Romance Writers of America and the Richard III Society. In my spare time, I bicycle, golf, play my piano and devour books of any genre.

My husband Chris and I moved here in 1989, and we’re in the same Hudson neighborhood, original owners in the Village at Barrett Hill.

Yes! I have a ritual of sitting on Hampton Beach with a notebook and pen, and plotting out my next book.

My latest title, a time travel romance, Dark Brew, is set on Cape Cod. But I’ve always wanted to write a historical ghost story set in Portsmouth and the Isles of Shoals, both very haunted places.

Fall is my favorite; there’s nowhere as beautiful as NH in the fall—the leaves are spectacular, summer’s heat is gone, and the juicy Honey Crisp apples are ripe for picking right off the trees.

Poverty, Prejudice and Murder Won’t Stand in the Way of True Love

The New York Saga spans three generations of the McGlory family, starting in 1894 amidst the poverty and crime on New York’s Lower East Side, through the wild, boozy years of Prohibition, and ending in 1963 as the country mourned President Kennedy’s assassination.

In Book One, FROM HERE TO FOURTEENTH STREET, it’s 1894 on New York’s Lower East Side. Irish cop Tom McGlory and Italian immigrant Vita Caputo fall in love despite their different upbringings.

In Book Two, BOOTLEG BROADWAY, it’s 1932. Prohibition rages, the Depression ravages, and Tom and Vita’s son Billy comes of age whether he wants to or not. 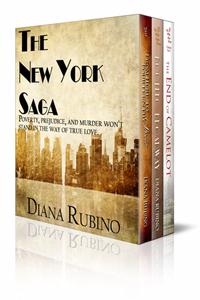 From Here to Fourteenth Street
It’s 1894 on New York’s Lower East Side. Irish cop Tom McGlory and Italian immigrant Vita Caputo fall in love despite their different upbringings. Vita goes from sweatshop laborer to respected bank clerk to reformer, helping elect a mayor to beat the Tammany machine. While Tom works undercover to help Ted Roosevelt purge police corruption, Vita’s father arranges a marriage between her and a man she despises. When Tom’s cousin is murdered, Vita’s father and brother languish in jail, charged with the crime. Can Vita and Tom’s love survive poverty, hatred, and corruption?

Bootleg Broadway
It’s 1932. Prohibition rages, the Depression ravages, and Billy McGlory comes of age whether he wants to or not. Musical and adventurous, Billy dreams of having his own ritzy supper club and big band. On the eve of his marriage to the pregnant Prudence, the shifty “businessman” Rosario Ingovito offers him all that and more. Fame, fortune, his own Broadway musical—it’s all his for the taking, despite Pru’s opposition to Rosie’s ventures.

Meanwhile, Pru’s artistic career gains momentum and their child is born. Can anything go wrong for Billy? Only when he gets in way over his head does he stop to wonder how his business partner really makes his millions, but by then it’s far too late…

The End of Camelot
November 22, 1963: The assassination of a president devastates America. But a phone call brings even more tragic news to Vikki Ward—her TV reporter husband was found dead in his Dallas hotel room that morning.

Finding his notes, Vikki realizes her husband was embroiled in the plot to kill JFK—but his mission was to prevent it. When the Dallas police rule his death accidental, Vikki vows to find out who was behind the murders of JFK and her husband. With the help of her father and godfather, she sets out to uncover the truth.

Aldobrandi Po, the bodyguard hired to protect Vikki, falls in love with her almost as soon as he sets eyes on her. But he’s engaged to be married, and she’s still mourning her husband. Can they ever hope to find happiness in the wake of all this tragedy?