Audiobook Review: Any Time, Any Place 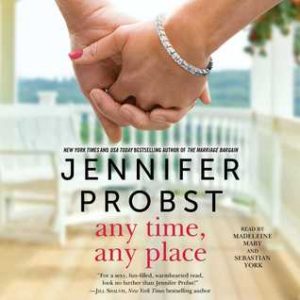 When Raven’s only parent, her loving father, was killed with his mistress in a car accident as they fled to Paris, she was left confused and alone. While Diane Pierce died a martyr of sorts, Raven’s dad was cast as the villain, and Raven vowed revenge on the Pierce family for muddying her father’s good name. It wasn’t until eight months ago that Raven realized the handsome trio of brothers that came into her bar were those dreadful Pierce brothers.

Dalton Pierce was devastated upon finding out that his mother was leaving the family when she died suddenly in a horrific car wreck. Years later, he still feels a huge emptiness in his life. He’s glad to be reunited with his brothers and helping to run Pierce Construction, but he feels like something of his own is missing. And the more time he spends with Raven, the more he thinks she may be what is missing.

Any Time, Any Place picks up the story of the three Pierce brothers reuniting and taking over the family construction business after the death of their father. As the youngest, he was most impacted by the loss of their mother years ago. He rebelled in his own ways, swearing never to settle down, but now finds something he wants in Raven. He senses a deeper connection and he wants to explore it, but she keeps him at arm’s length because of the secret she holds. However, Raven has let go of her need for revenge, instead moving on with her life and looking for someone special to share it with. I love how she denies herself the pleasure of Dalton, not letting her guard down because she views it as a betrayal to her father.

Both Dalton and Raven are fantastic characters. Each is strong and independent, yet sensitive and willing to anything for friends and family. Their strong wills make for excellent banter and even better sexual tension. I’ll admit that as much as I loved Dalton’s sly grin and mischievous flirting, I had a major girl-crush on Raven. She’s the owner of her own bar/restaurant, skilled boxer, talented mixologist, and she teaches the local women how to count cards so they can beat the guys in poker!

Ms. Probst does a fantastic job balancing romance and realism with her characters’ behaviors and reactions to some tumultuous situations. Raven and Dalton share a horrendous accident that marred their youth and tainted their ability to find happiness as adults. Having the story shared from both POVs helped me connect to both characters while diving into some messy emotions. I liked how the author let their story unwind and play out; not giving either an easy road.

This second title in the Billionaire Builders series is once again jointly narrated by Ms. Maby and Mr. York, and like the previous title, I enjoyed Mr. York’s performance more than Ms. Maby’s. Ms. Maby reads the story when the book is shared from Raven’s POV, likewise, Mr. York shares it when it is Dalton’s POV, and both narrators read all parts during their respective POVs. While both male and female performances work for well for the character they represent, I didn’t care much for Ms. Maby’s version of Dalton. I felt it was flat and underrepresented the magnitude of Dalton’s personality. However, Mr. York made up for it, with his deep voice echoing both Dalton’s charisma and fragile heart.

In the end, I truly enjoyed listening to Any Time, Any Place. After listening to the first title, I knew going in that Raven and Dalton wouldn’t have an easy romance, and Ms. Probst doesn’t disappoint. I felt real emotions in play as the pair worked through their difficult pasts to face a promising future. Their story made me laugh and cry, and was just what I needed. Although I wasn’t a fan of Ms. Maby’s male voices, she ran true for the female characters and Mr. York did a great job overall. I’ve come to enjoy the Pierce brothers and their group of close knit friends, and I look forward to hearing Sydney and Tristan’s story next.

At fifteen-years-old, Raven Bella Stratton’s father was killed in a horrible car crash. The bigger shock was the discovery of a woman with him—Diana Pierce—and their two fully packed suitcases with airline tickets to Paris. Devastated by her father’s betrayal, Raven went to live with her aunt, never truly overcoming the traumatic event. When she discovers that the mysterious woman had a family with a husband and three boys, Raven vows to leave the memory of her father behind.

Leaving his life in California behind to run Pierce Construction with his two older brothers, Dalton Pierce has enjoyed returning home and studying his passion of woodworking. But when he visits the local bar with his brothers one evening, he’s immediately drawn to the smart-mouthed, badass, sexy bartender who sets his body on fire. Unfortunately, she doesn’t seem as intrigued by him, and his multiple advances are met with rejection. When he offers to restore the bar back to its original glory, he begins to work with her on a daily basis, and falls harder. His plan of seduction slowly weaves a web around them both, until they are caught up in the spell. But Dalton doesn’t know the secret that can either destroy them both…or finally mend two broken hearts.