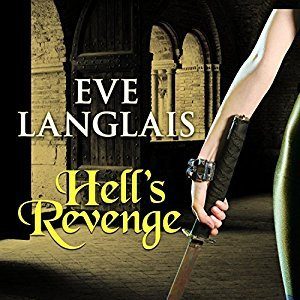 Hell’s Revenge opens with an overlapping scene from the epilogue of the previous book, Snowballs in Hell in which Muriel discovers her mom is none other than Mother Nature, Gaia. Although she hasn’t visited Muriel since leaving her with her father as a small child, Gaia has returned to inform Muriel that she is pregnant, and both of her lovers at the fathers. Gaia intends to take the child from Muriel. There is so much for Muriel, her lovers, and her father to process, which takes them to Hell to get answers. Unfortunately, there is still the “big bad” after Muriel, and her life, along with her quickly growing unborn child, is in peril.

Hell’s Revenge continues the overall story arc about a mysterious, powerful force who is after Lucifer’s kingdom, brining the issue to a head. While the entire story felt short, it was entertaining, and I liked how it wrapped up the storyline. However, in retrospect, the dangers and motives behind the entire three-book plot line weren’t as sinister as they came off in the first book. Some of the events from previous two books don’t every tie into the conclusion of the plot line. Regardless, the story was enjoyable. There weren’t nearly as many graphic sex scenes, and the book focused on the overall plot.

One important event from Hell’s Revenge is that Muriel and her family learn more about her powers. Her magic is almost its own entity, and if it is depleted, it will seek out new sources of sex for facets of Muriel’s magic not being fed. For example, it sought out and connected with a vampire to feed the cold and dark part of her magic. Once the magic connects, it is permanent. What does this mean in the long run? More men in Muriel’s bedroom.

Once again, Rebecca Estrella provides the narration for the story. One thing that changed in Hell’s Revenge, is that there are parts of the story shared from both David and Auric’s point-of-views. Ms. Estrella uses the same general narrator voice for each character, while continuing to provide a unique voice when each speaks. Overall, her performance is good – with unique and fitting voices for all of the characters. She’s also improved her emotional content, making the story more gripping as she shares it. However it was a bit confusing to switch POVs yet continue to have the same narrator voice.

In the end, I enjoyed Hell’s Revenge, and it’s my favorite of the series to date. I liked the deepening explanations of Muriel’s magic and the need for sex. I also liked understanding how much both David and Auric mean to her. With the alternate POVs, we also learn how much that bond truly is three ways, back and forth. Hell’s Revenge has an end-of-the-series type feel, but the fourth book is already out, so I look forward to finding out what happens next for Muriel, Lucinda, and the gang.

I am literally going to kill my mother. To say I have mommy issues is putting it mildly. The woman who abandoned me has a lot of nerve to just saunter back into my life without warning and drop a bombshell of atomic proportions. I tried to kill her as a way of resolving my inner Freudian issues, but my damned boyfriends stopped me. Spoilsports. As if wanting to strangle my birth mother isn’t enough, once again, someone is messing with my life and a new player steps in to save me. Did I mention my dark knight is tall, gorgeous, and fanged? Just don’t tell my lovers because apparently they’re not willing to share me with the undead. The final showdown fast approaches. I don’t care how powerful they are. They screwed up big time when they took something precious of mine. It’s never a good idea to piss off this princess of Hell because revenge is my middle name. Thrust into the final showdown, thankfully, I’ve got more than my fallen angel and kitty at my side. Dark, Fanged, and Delicious is determined to join my group. I’m facing my biggest challenge yet, but don’t worry, with the help of my family and lovers, Hell will have its revenge.