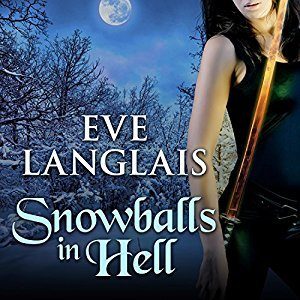 One month has passed since Muriel’s encounter with the mysterious Hooded One; the night she nearly died. Her reoccurring, daily nightmares are making her feel weak and worse, shameful. She does not like being afraid of anything. The changes in Muriel are especially tough on her soulmate, fallen angel Auric. He will do anything to protect his love and help her get better.

I’m going to say this right up front: Snowballs in Hell is FULL of graphic sex. So much so, that I actually started skimming and forwarding through the scenes. Additionally, due to issues with her sexually-charged powers, Muriel must add another male into her and Auric’s bedroom. While I have no issues with threesomes (also note: this is not a true menáge situation), the way that the threesome came about really irritated me. Honestly, I admired Muriel’s stance on adding another to her existing love life, especially after waiting years for Mr. Right to come along. However, her soulmate felt it necessary to manipulate Muriel into adding another to their bedroom. The fact that Auric blatantly tricks her into the situation made me furious! If the author had instead allowed Muriel to accept her body’s need for sex without the subterfuge, I would have enjoyed the storyline. But the over-the-top emphasis that Muriel would deny herself out of love, which lead to the secret sex plot, ruined it for me.

The overall storyline of discovering who is behind the attack that nearly killed Muriel was interesting; however the climatic scene and unveiling of said bad guys left me wanting a bit more. I love how kickass Muriel is, and when she takes charge of her own situations, she’s a wonderful heroine. Add in a touch of humor and sarcasm, and Muriel is one of the best UF characters. However, when she gets wishy-washy, she can be annoying. There was a bit too much focus on whether or not Muriel should sleep with another, but it did tie into the plot.

Rebecca Estrella provides a solid and consistent narration. Muriel’s voice is perfect. The array of male voices works for the story. Typically, I tend to enjoy a narrator more by the second or third book because of familiarity. However, the initial sex scenes felt robotic. It sounded like Ms. Estrella was simply reading the scene as a matter of fact, rather than putting emotion into it. Ms. Estrella does a great job with the individual characters when they speak. Then, I actually started skipping the sex scenes, so I can’t say if that part got better.

In the end, the story behind Snowballs in Hell is pretty good. The campiness makes the story fun. However, there was too much graphic sex for my tastes. And the subterfuge used to get Muriel to accept that her body needs lots of sex with multiple partners really ticked me off. I would have given it a B, but because of that, B- because it was an issue for me.

Story: B-
Narration: B

Hi, I’m Muriel, misbegotten daughter of Satan, and once again, my life is in turmoil. The cowled one who tortured me left a curse on my mind, one that makes me afraid. Completely unacceptable, but in order to remove it, I have to do something even worse-betray my beloved by bringing another man into our bed. As if having to participate in a threesome isn’t traumatizing enough, Hell has frozen over, and as much as I think Hades looks pretty in a blanket of white, the repercussions are severe. It’s a good thing this princess of Hell has two lovers determined to charge my magic in pleasurable ways. I’ll admit it’s not easy having nympho magic, but I’m prepared to take on another man in my heart and bed for the sake of saving the world.