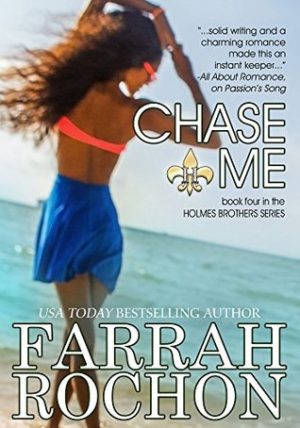 Indina Holmes has no need, nor any desire, for a relationship in her busy, successful life. After being burned badly in the past, she’s good maintaining her bedroom-only relationship with co-worker Griffin Sims. But when she takes Griffin on her family reunion cruise, messy feelings start to emerge, and Indina doesn’t know how to process.

Griffin Sims has enjoyed sharing his bed with Indina for the better part of a year, but lately, he wants more. Afraid to push, he seizes the opportunity to get closer to her when she invites him away for the weekend. Being around her family not only solidifies Griffin’s desire to make Indina his, but also opens up wounds surrounding his own family.

Chase Me was an enjoyable, easy read. With a cruise and family fun as the backdrop, I felt like I was on my own mini-vacation. And although this is the fourth book in the Holmes Brothers series, the romance was standalone, and there is a reboot feeling to the story as the author focuses on another part of the Holmes’ family. While I never felt like I missed out not having read the first three titles, I do think reading the books would have helped me keep straight the large number of characters in Indina’s life and family.

Indina is a great heroine! First… she’s forty-two years old! I love that she’s made her way and is living her life on her own terms. She doesn’t express regret that she’s not married with kids, rather, she enjoys her life as Auntie, surrounded by her family and friends. Yet, she’s strong and secure enough to question her life, but not her life’s choices, as messy feelings emerge after spending time outside the bedroom with Griffin.

Meanwhile Griffin won my heart right from the start. He so wants more with Indina, but won’t push her. He’s such a good guy, and I want him to succeed. His strong sense of himself drew me in, and my heart cracked as Griffin realized he couldn’t continue with the status quo because of his feelings for Indina. I also loved the side story involving his family.

Overall, Chase Me is a delightful, feel-good romance. Other than some slight repetition with Indina’s relationship fears, the story was well told. I liked that both Griffin and Indina had baggage, and while it caused problems, it didn’t feel contrived. The hurt each experienced was tangible. Their built-in history gave the relationship more weight right from the get go. I love the strong successful heroine who needs things on her terms. The romance is standalone; however, the author planted the seeds for future titles, getting me excited for more.

What was she thinking?

The last thing Indina Holmes needs in her life is three days on the open seas with her loving but nosy family. But that’s exactly what she’s in store for her when her brother guilts her into joining the Holmes family reunion cruise. When she needs a cabin mate at the last minute, her only option is the co-worker she’s been sleeping with for the past year. Now, she just has to keep her family from trying to play matchmaker.

What was he thinking?

For the past eight months, Griffin Sims has pretended to be okay with the co-worker-with-benefits arrangement he’s had going with Indina, but he wants more than just her body. He wants a real relationship. Indina’s invitation to join her on a cruise is exactly the opportunity Griffin has been looking for to prove to the woman who has been sharing his bed that it’s time for her to share her heart.

3 responses to “Review: Chase Me by Farrah Rochon”