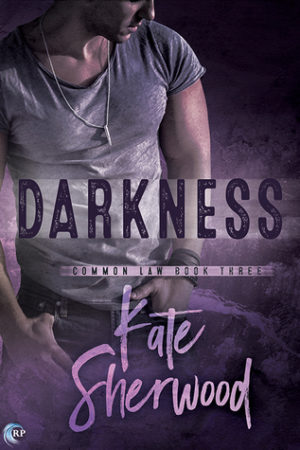 Several months into his “vacation” working as under-sheriff for his high school friend and lover, Kayla, Jericho Crewe has re-adapted to things far better than he’s willing to admit. Unlike his job as an officer among the anonymous multitudes of LA, however, Mosely, Montana lays every consequence of his actions bare and unavoidable. Much like his feelings for his other former lover, and ongoing complication, Wade Granger.

The first in this series, Long Shadows, was a compelling introduction to Jericho’s story, and hooked me from the start. The second, Embers, drew me in, but I still felt like more of an outsider, possibly because of Jericho’s own fight with his own convictions. Darkness, however, was an entirely different experience for me as a reader. Jericho isn’t surrendering so much as he’s accepting the truths about himself that he couldn’t outrun.

Jericho is correct when he refers to Kayla and Wade as the angel and the devil (respectively) on his shoulders. But, after three books worth of Jericho waging his own internal battle, I was delighted to see him realize they were sort of telling him the same thing: sometimes, the law can’t dictate what’s right and wrong. Sometimes, that distinction can only be found in the intentions of the actors—in the heart.

While I’ve consistently found Wade to be an extremely compelling character, I was especially happy with the dynamic between he and Jericho in Darkness. For the first time, Jericho seems to understand that he has the power to truly hurt Wade with his assumptions and distrust of Wade’s intentions. Wade’s protectiveness and boundaries when it comes to his own sense of right and wrong echo Jericho’s realization that sometimes the law just isn’t good enough. The epiphany that finally allows Jericho to see what Wade really means to him, and the intimate and reflective moments that followed were some of my favorite parts of the series so far.

All in all, Darkness is an excellent addition to an already strong series. My appreciation of Jericho increased substantially over the course of the novel, and my affection for Wade did much the same. These characters have definitely grown on me as I’ve gotten to know them better, and I highly recommend reading this series from the beginning. With only one story left, I can’t help but be both excited and worried to see what happens next, even though I’ll be sorry for it all to end.

A murdered prostitute. An obvious suspect. Clear evidence. For once, Jericho Crewe has a straightforward crime to investigate, and Wade Granger isn’t involved.

It all seems so simple, but Jericho’s instincts won’t let him rest. As he investigates, he finds troubling suggestions that the murder is a part of something larger and more sinister. But working within the boundaries of the law may keep him from finding the truth. If Jericho doesn’t break the rules, an innocent man may rot in jail while a killer remains free to strike again.

Inevitably, it all comes back to Wade. Because who else knows as much about breaking rules? And who else knows Jericho the way Wade does—not wisely, but far, far too well?

One response to “Review: Darkness by Kate Sherwood”