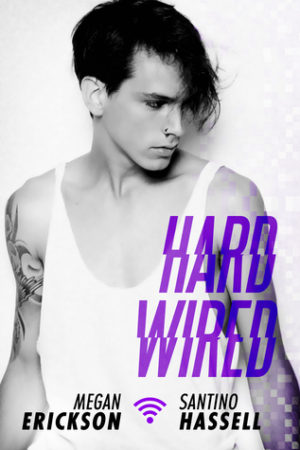 How often are words our greatest enemy? The ones we ought to say, but don’t. The ones we shouldn’t say that come screaming out of us, unfiltered and angry, when silence would be better. And, the ones that might make all the difference in the world, if only we could be brave enough to speak. Jesse Garvy and Ian Larsen, the two main characters in Hard Wired, by Megan Erickson and Santino Hassell, seem to run the gamut.

As has been the case with the previous titles in the Cyberlove series, I absolutely loved this story. Jesse and Ian have been fixtures from the very beginning as Kai Bannon’s chat mods, “Garvy” and “Cherry,” and seeing them get their own book is a gift. As a fan, I appreciated the overlap between the varying perspectives, which served as a reminder that every “secondary character” in real life is living their own narrative in parallel to my own.

While it is another exploration of internet-generated connections, Hard Wired still manages to be unique in both tone and substance. Despite being friends for years, Ian and Jesse are strangers in many ways until they are placed in a position to relearn one another, their relationship bisected when “real life” doesn’t go according to plan. My heart hurt for both of them as things began to unravel, but I enjoyed their journey back to each other very, very much.

Another thing I liked about Hard Wired was that the writing, in general, has gotten even better—although there was nothing lacking in the previous stories. Filled with vivid descriptions of colors, scents, tastes, and sensations, this story came to life for me in a way that a lot of others haven’t. There were also more than a few passages that I found to be particularly on point, many involving Ian’s difficulties with personal interactions. The addition of just the right amount of humor and snark makes Hard Wired a new favorite.

In the end, I think the entire Cyberlove series is both timely and relevant, and Hard Wired is an especially welcome part of the world these two authors have created. Seeing some of the characters from previous stories was a lot of fun, Kai and Garrett, most notably, and it was good to know that certain other members of Kai’s chat crew are still very much themselves. There’s a little bit of everything here, all well-balanced, and I couldn’t help but start reading it again as soon as I’d finished it the first time. There simply isn’t a thing I didn’t like about Hard Wired, and I can’t wait to see what Ms. Erickson and Mr. Hassell will come up with next.

Overall, this series keeps getting better.

My FallenCon agenda is simple: sit on a couple of panels and let people meet the real me. Jesse Garvy—mod of a famous Twitch channel and, if I ever come out of my shell, future vlogger. I definitely didn’t plan to sleep with a moody tattooed fan-artist, but he’s gorgeous and can’t keep his hands off me. There’s a first time for everything, and my first time with a guy turns out to be the hottest experience of my life.

But the next day, I find out my moody fan-artist is Ian Larsen AKA Cherry—someone I’ve known online for years. And he’d known exactly who I was while shoving me up against that wall. Before I figure out whether to be pissed or flattered, the con ends.

Now we’re back online, and he’s acting like nothing happened. But despite the distance between us, and the way he clings to the safety of his online persona, we made a real connection that night. I don’t plan to let him forget.