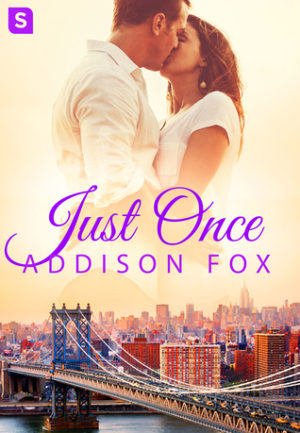 Just Once is a slightly darker, definitely more serious book than the first one in the Brooklyn Brotherhood series. I liked that it was different because main character Landon McGee is very different from his professional football star turned bar owner brother Nick. Landon is quiet, a bit of a loner, and lives mostly inside his own head. Sharing anything with anyone is tough.  He’s learned to trust his adopted mother Lusia Mills and his adopted brothers, but Daphne Rossi, is going to have to work hard to earn the level of trust she wants.  Landon is going to have to learn to trust if he’s going to keep her or any woman.

There was a rush to date and sex, the two becoming romantically involved shortly after a break-in at his business. No matter how self-aware she were, I think a determined police officer like Daphne would have waited longer to act on any feelings she had for Landon during an open case.  That part felt a little contrived, although it did allow for the support of being in a relationship while these two excised their demons and tried to solve the crime committed against Landon.  It wasn’t a huge mental stretch to figure out the key players, but it wasn’t an open and shut case either.  This allowed the focus to be on Daphne and Landon rather than what happened to Landon.

Unfortunately, the case which brought the two lovers together didn’t get enough attention, in my opinion. I wanted a more dramatic conclusion, but it was handled as an after-thought in the epilogue. I thought Fox could have even dragged it into the next book with an even more explosive result.  Instead she kept the focus on her lovers.  I can’t fault her for that, it was a choice, but I feel that there was space to do both by making the manuscript a little longer.  Coming in at under 300 pages, I don’t think some additional length would have put anyone off reading the book—especially because Fox is a solid writer.

I’m looking forward to the third installment, presumably Fender’s book since we met the target of his affection in Just Once.  That should be an interesting book with key players from completely opposite backgrounds.

Landon McGee has a past he’d rather stayed buried and forgotten. Now a successful video game designer, his life in Brooklyn with his adoptive mother and brothers has made him into the man he is today. But when his office is robbed and the gorgeous Detective Daphne Rossi comes onto the scene, her desire to investigate the crime—and his past—could be Landon’s undoing.

Daphne knows she’s a good cop. She’s determined and always gets to the bottom of her cases. But something about Landon, and his break-in, has her questioning her ability to keep her personal and professional lives separate. As Daphne probes further into the case, Landon’s past comes to the surface, threatening their budding relationship. Will the secrets in his past put a halt to the growing passion between them, or is love enough to make them see that a future together is worth coming to terms with the past?

Reviews in the Series:
At Last by Addison Fox (Brooklyn Brotherhood #1)