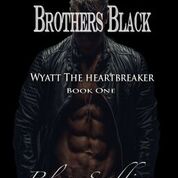 I haven’t the slightest clue what is going on with Wyatt. His face when I said hello to him went from stunned, to flirtatious, to suspicious. I wasn’t sure if my breath was bad from the flight or if I looked a lot worse than I thought from the few tears I had cried.

When we touched while loading my bags, I felt a jolt go through me, and I am pretty sure he felt it too. I almost creamed my pants when he licked his lips, and his piercing peeked out of his mouth. He didn’t have that last time I saw him, but that was years ago.

Honestly, it would be a total turn off on any other guy for me. On Wyatt, it is hot as hell and causes all types of dirty thoughts about him with his face between my thighs. The piercing isn’t the only thing that has changed since the last time I saw him.

Wyatt is all man; there are no more signs of the younger, moving into manhood Wyatt. He has grown his hair out. His hair used to be cut within inches from being a true buzz cut. Now it is shorter on the sides, but longer on the top showing off his natural brown locks that he has used some product on to tame the curls into more soft waves than curls.

He is all masculine male, with the muscled body to match. He looks more ripped beneath his tight grey t-shirt than I have ever seen him. His thick thighs push nicely against his khaki shorts that are hanging low on his slim waist. His grey and white sneakers just make him look relaxed like he could be on a case or hanging with friends, not really committing to either.

I always liked that about Wyatt. The world seems to move around him, not the other way around. It’s not just his looks. It is the fact that all seven of his brothers look up to him and listen to what he says. It is in his walk, his talk, his swagger. It is the way he looks at you if you are lucky enough to get his attention.

When his eyes locked on mine at the car park, I thought I was going to be sucked into his golden orbs. Wyatt is like a magnet. I can’t help but be drawn to him. I peek over as his tan arm moves to rest on the gear shift. I wish Noah would have sat up front. I am fighting hard not to squirm and fidget.

“Have we met before,” Wyatt says out of nowhere.

“Not really, we have seen each other in passing,” I murmur just loud enough for him to hear.

“Sorry I don’t remember,” is he blushing? Oh my God, he is blushing. “I just figured we must have met before since you knew who I was.”

“No problem, it was a long time ago, we have never spoken really and I can be a forgettable person. Besides, Uncle Rob text me that you would be coming, if I hadn’t seen you before, I know all of your brothers. I would have known it was you,” I say with a small smile.

Wyatt snorts and pulls a face. “You are far from forgettable,” he says and turns to me quickly looking me over then turning back to the road.

I go to reply, but Noah speaks up from the backseat. “Hey, I just got a text from Heather. Everyone is going to Rob’s. Faith is cooking,” Noah says seemingly oblivious to our conversation.

“Oh come on,” I groan. “I told Aunt Faith I didn’t want them making a big deal.”

Noah reaches over the seat to mess my curls. “You are a big deal to us. I can’t wait to get you in the gym so I can kick your ass,” Noah laughs.

“Oh hell no,” I shake my head as I try to dodge his attack. “I left Steve in Seattle, along with the mandatory six a.m. gym visits.”

“Not a chance,” Noah roars with laughter.

I groan and cross my arms across my chest with a pout. Noah took it upon himself when we were younger to teach me self-defense. Bean had learned a lot from her dad, but Noah would drill us both.

Steve was happy to learn that when I started to date Barry back in Seattle. He wasn’t physically abusive in the beginning, but Steve never liked him and when he saw I wasn’t going to break things off with Barry he started to brush up on my self-defense. I have to say I am grateful to them both now.

We are stopped at a light. When I see it has turned green, but we are not moving I look over to where I feel eyes burning into me. Wyatt is staring at me with the most intense look I have ever seen. I feel like he can see through me as if he knows everything. I feel like he knows I am running from something.

The look sends a shiver down my back. Horns blare behind us, and Wyatt returns his attention to the road. I hear Noah chuckling softly in the back seat, but I say nothing. I still don’t understand what is going on with Wyatt. I have enough on my plate, though. I have no time for Wyatt Black, the Heartbreaker.

Heather warned me that nothing has changed there. Wyatt is still leaving a trail of hearts in his wake. Mister Love ‘em and Leave ‘em is dangerous. I have seen him in action. I may be younger, but I watched the girls that used to weep over him in high school. They all knew it would happen, but they just didn’t care. He is Wyatt freaking Black; you wait with baited breath for your turn with Wyatt Black.

I have a job to start, and I need to find a place to live. I don’t care what he says. He’ll forget me as soon as I am out of his car and the next girl crosses his path. That is who Wyatt is, and it will do me well to remember that.

I don’t just love my woman, I protect her, I provide for her, I would die for her. Nellie walked into my life when I needed her most. Now I’m not willing to let her go. I will destroy anyone that even thinks of harming my woman. Nellie is nothing like the women I used to bring pleasure to. Oh yes, I bring pleasure on levels that will numb your mind for months. When I lay eyes on Nellie, I know I want to bring her and only her that pleasure. I just need her to see past my past. I’m the oldest of seven hardheaded brothers. Some call me the ring leader, some call me the voice of reason, and everyone knows me as the heartbreaker. Only I never wanted her to know that. Now I’ll just have to show her that I can heal a heart much better than I can break one because I want hers.

I am running from my past. I never thought that I would run right into the arms of freaking Wyatt Black. I watched him break hearts from afar. The last thing I need is to be next. But like I said, this is Wyatt freaking Black, the six foot three, golden eyed breathing definition of sexy. Women line up to get their hearts broken by him. So really how am I supposed to resist him? I’ll give in and when I do, I’ll find that he is more than what I bargained for in so many ways. I mean in every way imaginable. If sex were a weapon Wyatt Black would be lethal. Who I am kidding? Wyatt is lethal, especially when it comes to me. When the past comes to haunt us, Wyatt will always protect me, without thought, without question. Wyatt isn’t a heartbreaker, he is my heart healer.

This book is intended for mature readers, 18+ 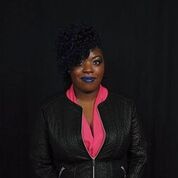 In just over a year since romance author Blue Saffire began writing and releasing books, she has trailblazed a path to success that many indie writers can only dream of. A multi-Swirl Award winner and a perennial Amazon bestseller, Saffire is the woman behind the popular interracial romance series “Legally Bound,” “Hush,” “Ballers,” “Brothers Black,” “Perfect For Me” and “Yours.”
Always the overachiever, Saffire typically releases a new book every four to six weeks, quenching the thirst of her dedicated fans with spicy storylines and dynamic
writing. Saffire has seven releases slated between October 2016 and January 2017 including three new “Brothers Black” books and four new “Legally Bound” books.
One of Saffire’s keys to success is her talent for connecting with readers on a personal level. In 2017, she’s throwing Blue’s March Madness from March 23 to March 25 at Wild Dunes Resort in Isle of Palms, SC. Not only does each reader get a chance to meet and hang out with Saffire, she’s inviting her bestselling author friends to join in on the fun. Included in the price of tickets are the events, new books exclusive to March Madness attendees and an extra-special secret surprise.

Blue Saffire is a woman on a mission to share her words and thoughts with the world. She has found her passion in her pen and steams up the pages wit

h her humor, honesty, love and voice. Saffire represents the secret author inside that some of us are too scared to let out.  Saffire and her family all enjoy life in the suburbs. However, life throws her challenges daily and since her diary is no longer enough, she has decided it is time for new outlets for the words she would never say face to face to her friends, family and definitely not her husband.