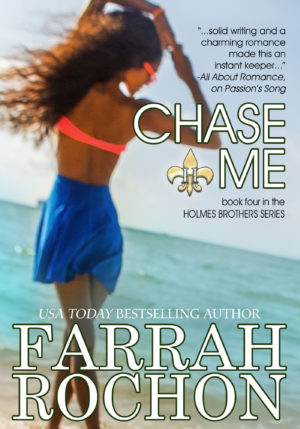 The shower stopped the minute Indina disconnected the call. Moments later, the bathroom door opened and Griffin Sims walked out, wiping his face with a plush cranberry-colored towel. There was another towel wrapped around his waist, hanging low on his hips. His chiseled dark brown chest glistened with specks of moisture. Indina tracked a water droplet that traveled down his torso to the smattering of curly hair that trailed from his bellybutton to below the towel.

She pulled her bottom lip between her teeth and damn near whimpered.

Griffin stopped short when he spotted her.

“I’m sorry,” Indina said, rising from where she’d sat on the edge of his bed. “I got a phone call that I had to take just as I started getting dressed.”

“No need to apologize. It’s just that you’re usually gone by the time I get out of the shower.”

Her eyes roamed over his muscular back and shoulders as he walked over to the dresser. She didn’t know where he found the time to go to the gym, but she appreciated the way he took care of his body.

“Are you still nervous about today?” Griffin asked.

He turned to her, holding the pair of heather gray boxer briefs he’d retrieved from the dresser. He dropped the towel and Indina couldn’t hold back the whimper this time.

She had explored the heavy weight between his legs with her tongue just an hour ago, yet her mouth still watered at the sight of it. She just stood there and marveled at his beauty as he pulled the briefs up his well-toned legs.

She blinked several times. “Wait. What?”

A knowing grin curled up the side of his mouth. “I asked if you were still nervous about today?”

“A little, but at least I’m no longer tense.”

“Happy I could help with that,” he said. His deep chuckle reverberated along her nerve-endings, straight down to that spot between her legs he’d pleasured this morning.

Over the last eight months, she’d relied on Griffin for that particular kind of pleasurable help on a regular basis. They’d met a little over a year ago, when Indina decided to move away from residential interior design and concentrate on the more lucrative industrial sector. She began freelancing with the structural engineering firm where Griffin worked after one of the owners sought her out.

Griffin was the lead engineer on the very first project she worked on with Sykes-Wilcox. The physical attraction had been there from the moment she walked into a conference room and saw him braced over a set of blueprints, his shirtsleeves rolled up on his strong arms. Indina decided not to act on that attraction until several months later, after she learned through the office grapevine that Griffin was divorced and not necessarily looking for a relationship.

She knew all about that. Not the being divorced part, but being burnt out on relationships?

Hell yes, she knew about that.

But there were only so many Top Ten Self-Pleasuring Tips articles a girl could be expected to read. And she’d read them. All of them. She needed the real deal. The way Indina saw it she and Griffin were in the perfect position to provide each other with some much-needed sexual relief.

She could still remember how her fingers had trembled as she’d typed the text, asking Griffin if he was up for a little casual, no-strings-attached sex. She wasn’t sure how she would have handled working with him if he had turned down her bold invitation to meet her at the Bourbon Orleans Hotel in the French Quarter.

He’d arrived at the hotel even before she did, and with that one afternoon, they’d embarked upon a co-workers with benefits arrangement that never failed to leave her body satisfied and her mind free of relationship drama.

Her phone beeped. It was a text from Harrison with the travel agent’s name and phone number, and a reminder to send the name of the person who would be sharing her cabin.

Indina looked over at Griffin. He’d just put on a gingham blue dress shirt, but hadn’t bothered to button it up yet. Her mouth watered again at the expanse of exposed skin.

He looked up from the neckties he’d been contemplating.

“Everything okay?” he asked.

Indina nodded and decided not to ask the question that had been on the tip of her tongue. Hadn’t she just acknowledged that what she and Griffin had going was perfect? Why would she jeopardize it by asking him to come with her on this damn family cruise?

She slipped her dress over her head, then picked up her wristlet and keys from where she’d dropped them on the dresser.

And that was just fine with her.

“I’ll see you in a few hours,” Indina said, gripping the handle on the bedroom door. “I’ll lock the front door on my way out.”

What was she thinking?
The last thing Indina Holmes needs in her life is three days on the open seas with her loving but nosy family. But that’s exactly what she’s in store for her when her brother guilts her into joining the Holmes family reunion cruise. When she needs a cabin mate at the last minute, her only option is the co-worker she’s been sleeping with for the past year. Now, she just has to keep her family from trying to play matchmaker.

What was he thinking?

For the past eight months, Griffin Sims has pretended to be okay with the co-worker-with-benefits arrangement he’s had going with Indina, but he wants more than just her body. He wants a real relationship. Indina’s invitation to join her on a cruise is exactly the opportunity Griffin has been looking for to prove to the woman who has been sharing his bed that it’s time for her to share her heart.