What It Takes: A Kowalski Reunion Novel 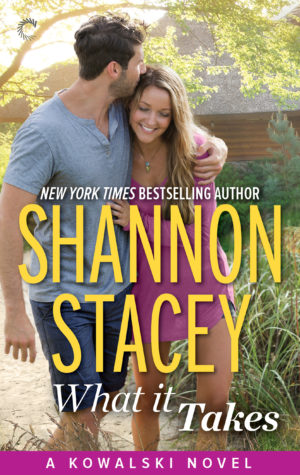 “You were not kidding about the food,” Laney said in a low voice to Ben.

“The really amazing part is how much of it is gone,” he whispered back and she chuckled.

Somehow, without her realizing what was happening, she’d ended up sitting on a picnic table bench next to Ben. She had been sitting there talking to Beth, who did the office work for the sports bar her husband owned, and then Kevin had spotted Ben and waved him over to ask him a question about the ATV trails. After they’d talked for a couple of minutes, it had seemed natural for him to sit down. And then Mitch and Ryan had joined them, so Ben had scooted closer to her.

So here she was, in a crowd of people, so close to the man she’d kissed only twenty-fours ago that their legs kept bumping together. And the last time they’d bumped, he hadn’t bothered moving, so his thigh was resting lightly against hers. Normally, she would chalk it up to six adults sitting at a picnic table, but this was Ben. And when it was him touching her, incidentally or not, she noticed.

A child’s wail went off suddenly, like a siren, and Kevin and Beth both turned their heads toward where the kids were all eating together. Then, as Laney watched, they turned back to each other and played a fast game of rock, paper, scissors. Her paper covered his rock and after being denied a chance for two out of three, Kevin got to his feet and headed toward the kids.

“Gabe has a bit of a temper and he’s stubborn as hell,” Beth told her. “People try to tell me it’s the terrible twos, but I haven’t met a Kowalski yet who’s outgrown it.”

“Hey,” Mitch and Ryan said at the same time.

Beth smiled sweetly at them. “Are you denying it?”

When they refused to answer, Beth laughed and Laney found herself laughing, too. The family dynamics were fascinating to her. The Kowalskis were nothing like her family, and they especially weren’t like the Ballards. It wasn’t that Laney didn’t love her family, and she knew they loved her, but they weren’t very expressive about it. And they often spoke of family as a duty. An obligation.

If the Kowalski family was any more expressive, they’d be too much. They were loud and funny and, even when they were insulting each other, the affection they felt for one another was always evident.

Watching them with the kids really made her ache, though. If she’d had children, that’s how she would want them raised. Everybody kept an eye on them, but they weren’t forced to sit still and behave. They had rules, of course. She’d already seen Lily get a talking-to from her grandmother and Lisa had reined her teenagers in when they got too rowdy too close to the grills. But they were happy kids, obviously loved, and they were given the freedom to be themselves.

Watching them made her even more painfully aware that she’d always thought she’d have children by this point in her life, but these kids also reinforced that her lack of conception during her marriage might have been a blessing.

It was Beth who asked, breaking into her thoughts, and Laney smiled at her. “Yes. I was just lost in thought there for a minute.”

Kevin came back and stepped over the bench to sit back down. “Johnny stole one of Gabe’s chips, so Lily gave him one of hers, but hers was barbecue-flavored and he did not like that.”

After a few more minutes of chatting, Laney realized she was starting to feel a little too comfortable at the table. Everybody was very friendly, but it wasn’t only that. It was sitting with Ben, legs touching, that made her feel almost as if she was a part of something she actually wasn’t. She liked boundaries and she needed to maintain some not only between her and the family she worked for, but between her and Ben. They’d survived one kiss without too much awkwardness, but she didn’t want to be sending him mixed signals.

“I’m going to help clean up,” she said, getting to her feet. “I need to burn off some of the million calories I just ate.”

“Calories don’t count if the food was cooked on a grill,” Kevin said, and Beth laughed.

Even if she hadn’t known the families camped together at least once every year, Laney would have been able to guess by their level of organization. It wasn’t long before the paper plates and napkins were tossed, and the condiments were all on trays that were easy to carry back to the campers.

“I’ll take that to the Dumpster on my way back to my camper,” she told Ryan’s wife, Lauren, who had just pulled the full trash bag out of the can. At least she wouldn’t have to lecture this group on how much raccoons, skunks and bears loved garbage and carelessly stored food.

“Just throw it on one of the four-wheelers,” Lauren said. “The keys are still in most of them.”

“I told them not to be lazy about the keys.” Mary shook her head. “We have too many little ones now to be leaving keys in the machines.”

“I’ll remind everybody. But Laney, you can go ahead and take one of them.”

“I don’t know how to drive a four-wheeler,” she confessed. “I’ve never even sat on one before.”

Not only Lauren and Mary, but a few people who were nearby turned to look at her, but it was Keri who spoke. “Never? Oh, you have to learn. I only learned the summer Joe and I got together—at the annual camping trip, no less—and it’s a lot of fun.”

“I can’t believe Josh or Andy hasn’t had you practicing,” Mary added. “It seems like being able to drive an ATV around would make some of your work easier.”

Laney thought of Ben’s offer to teach her and couldn’t stop herself from looking over at him. He was not only close enough to hear the conversation, but he was watching her to see what she was going to say. “I’m definitely going to learn. Maybe once things settle down a little.”

Ben’s lips curved into a smile and she thought he might have given her a quick nod. The other women started talking about who would be the best one to teach her—and it seemed like a tie between Andy and Ryan—but Laney just let them talk. As much as spending time together complicated things, she couldn’t really see herself trusting anybody but Ben to show her how to ride one of those things.

And from the looks of it, he was still willing to teach her.