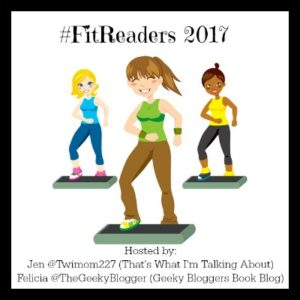 As I wrote in my #FitReaders check-in today, I’ve been increasingly frustrated with my Fitbit and decided to try the Apple Watch. Let me state right up front that the Apple Watch is NOT a fitness tracker… it is a smart watch with fitness tracking capabilities. I will also preface this post by stating Apple’s idea of “fitness” is different than Fitbit’s. Fitbit focuses on goal attainment, with steps being the primary goal; however, goals for exercise and activity can also be set. Apple looks more at whole body fitness, adding in breathing and focusing on active calorie counts. Lastly, I am an Apple junky: I use a MacBook, iPhone, and my kids both use Apple products, so while I’m looking at the fitness tracking in this post, the fact that I have seamless integration with my existing products adds a lot to the value of the Apple Watch.

For comparison in this post, I am using a Fitbit Alta (first gen) and an Apple Watch Series 2. The Alta does not have a heart rate monitor, so I didn’t use that aspect in my comparison.

What I want in a tracker:

When trying to decide if I should get a new tracker, I had to think about what features I want. While this list is what I made when researching, I’ll admit after a week of using the Apple Watch, some have changed.

Additionally, features I love about the Fitbit:

The Apple Watch has its own Activity app that is native to the watch and integrates automatically with the iPhone and Watch. Additionally, the iPhone has a Health app that imports data from your Watch (such as heart rate) and from the Activity app (such as exercise and movement). Together, these two apps do much of what the Fitbit app does; however, it is nowhere as easy to read and understand. Finding workout details and other aspects that are on the Fitbit dashboard can be tricky until you figure out where everything is housed within Apple’s system. Additionally, users have to use a third party app to track food. While I was already doing that with LoseIt, if you are solely tracking your food within Fitbit, you will have to start a third party app. The good news, there are several apps that work together with the Apple Health App and Apple Watch. 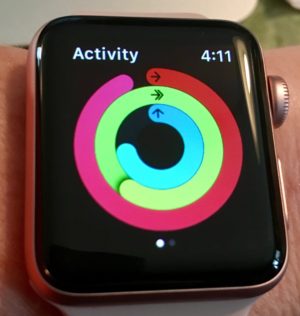 The Activity App / Watch tracks three main goals, which it displays as rings on the Watch. The inner, blue ring represents how much you “stand” during the day. “Stand” is a misnomer, however, because it really tracks hourly movement. Similar to the “red dot” goal in Fitbit, the “Stand” goal urges users to get up and move around for a least one minute every hour, with the goal of hitting 12 hours during the day. Unlike the Fitbit, they do NOT have to be consecutive hours, so if you get up in the middle of the night to feed the cat or use the restroom, and move for a minute, that counts! Although I cannot change the goal from 12 hours/day, I like the flexibility of it being ANY 12 hours instead of a set time.

The next ring is the green “Exercise” ring. This goal is similar to Fitbit’s “Active Minutes” tracker. Apple defines exercise as movement equivalent to a brisk walk and it looks at both movement and heart rate to determine if you are “active” (aka “exercising”). Bad news – this goal is fixed at 30 minutes/day and cannot be altered. Good news – it picks up movement in very small increments. So if you are running around your house doing laundry and getting kids out the door, you will probably pick up some exercise minutes. For me, this aspect seems to pick up a lot of movement as exercise; however, it may change eventually as the Watch learns my baseline habits. I have read some complaints that the exercise ring is not very good. People have reported tracking a hike or walk for 30 minutes, and only half of the time counts as “exercise” minutes. We’ll see how this one goes, but right now, it’s just a nice feature but not something I’ll use much, similar to how I felt about the “active minutes” on Fitbit.

The outer ring represents the “Move” goal – which is a measurement of active calories. This is the primary and only modifiable goal in the Activity app. Unlike the Fitbit, which only gives a measurement of total expended calories during the day, the Watch measures and differentiates between active and resting calories burned. Active calories are important to overall health and well being. For example: I may be able to walk 10,000 steps during the day, but if I’m not elevating my heart rate, I’m not achieving active calories. This is a big change in mindset and the primary difference between Fitbit and Apple Watch Activity trackers. I really like this goal, especially because each week it reviews your prior week’s output and recommends updates and changes. 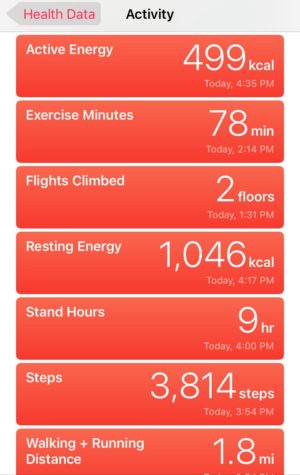 Apple also tracks steps, which is visible on the Watch and in both the Activity and Health apps. So one can still have a step goal, just no fireworks or hoopla when you hit your goal, and without the focus on steps, it becomes a secondary achievement. It also records stairs climbed, heart rate, total distance, etc., like the Fitbit, but finding the information isn’t as easy as the Fitbit dashboard. The health app also records “resting energy” and when added with the “active energy,” gives total calories burned, like Fitbit.

Recording and tracking workouts is another feature of the Watch. I have the Apple Watch Series 2, which is waterproof and has a built in GPS, so it can be used independent of the iPhone and can be used to track swimming or water aerobics. I like that I have the ability to record a wide variety of workouts directly from the Watch, which you cannot do with a Fitbit. For example, I like to do yoga, and with a Fitbit, I have to go back in a log the workout after the fact, rather than as I go. The downside is that I cannot log a workout after the fact if I do one without wearing the watch. I haven’t had this problem yet, but I can see it being a concern. I did read up that using some third party apps that track workouts and integrate with the Watch, you can log workouts after the fact. Right now, I’m not using a third party workout app.

As I mentioned earlier, I use LoseIt to record my food. I’ve been using LoseIt for years, and so when I got a Fitbit, I continued to use it to monitor my weight and calories in. And by linking the two apps together, Fitbit would input my calories burned to give me the whole picture. I can still do the same thing with the Apple Watch. Now instead of a “Fitbit Calorie Bonus,” I have a “Step Bonus” and bonus for active calories burned while working out.

For a good article on the Apple Watch fitness features, check out this one on iMore.com.

Looking at the Numbers:

I wore both my Apple Watch and Fitbit – on the same wrist – for a week. I compared Steps, Active Minutes (Exercise Minutes), Hourly Movement, and Calories Burned.

Other than a few outliers, the two appear to be fairly close in their tracking capabilities. I think the difference in Steps on Saturday was do to the fact that I worked at a Girl Scout cookie booth for 5 hours. I was standing and moving my arms a lot, but not walking. In this case, it appears that the Fitbit recorded more steps due to arm movement. And you can see how Apple’s active minutes is less “sensitive” and easier to collect than Fitbit’s Active Minutes.

A couple other differences of note… The Apple Watch battery life is only about 18 hours due to the massive amount going on other than the fitness parts. The Alta only needed to be charged every 5-6 days. The Watch charges quickly, and I’ve been charging it a bit before bed and again when I wake. Most people charge it overnight. I love the “silent alarm” feature of the Fitbit, and the Apple Watch can do the same. I like the ability to change the intensity and length of the “vibrations” on the Watch. Another difference is that there is no online/web-based log for the Apple Watch Activity app, where as I can access my Fitbit dashboard on any computer using the internet.

Looking back at what I want from a tracker and the features Fitbit has that I enjoy, by in large, the Apple Watch can service the needs. While not as inherently easy to follow, the Apple Activity and Health apps have all the same (and more) information as the Fitbit app. It’s Fitbit’s “extra” features such as the social aspect, automatic exercise detection, and sleep monitors that are lacking. Of note: there are several third-party apps that allow the Watch to monitor sleep, but I’m not trying any of them at this point. Also, I can be “fitness friends” with others who have an Apple Watch.

In the end, the Apple Watch is a smart watch that can become a pretty decent fitness tracker, with the use of some third-party apps.  It does require a shift in attitude in what and how you monitor your fitness, which I like. The bonus of having a smart watch outweighs some of the downsides of losing the Fitbit features. So I’ve decided to keep my Apple Watch and test it solo for a week to find out if I enjoy it as I did this first week.

I hope this discussion is helpful to those considering an Apple Watch. If you have any questions, please let me know!

One response to “#FitReaders: Jen’s Comparison of Apple Watch & Fitbit”