Posted March 23, 2017 by Jen in Listen Up!, Rating A, Sci-Fi or Fantasy Fiction, Urban Fantasy Tags: Alexandra Harris, Anne Bishop, Audiobooks, Jen Review, Penguin Random House Audio, The Courtyards of the Others, The Others series

Audiobook review: The Others Series 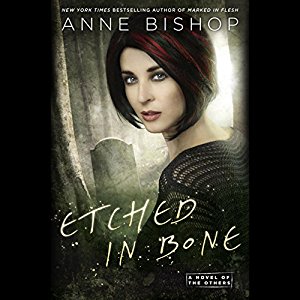 Etched in Bone is the fifth and final book in the utterly amazing, wholly original The Others series by Anne Bishop. The story picks up just after the conclusion of powerful events of the previous book, and is the culmination of everything learned since Meg arrived in the Lakeside Courtyard way back in the first book.

Etched in Bone deals with the limited transportation and food shortages created when the Elders culled many humans and took back human-controlled towns. The new living situation brings out a different kind of human “predator,” and the Elders must determine how much human they want to keep in the world. Having two Elders observe the Lakeside Courtyard places Simon in a precarious situation; he must allow a dangerous human (Officer Montgomery’s shady brother, Jimmy) to stay in near the Courtyard so the Elders can figure out what makes him a bad type of human (and therefore they will be able to destroy those humans that are a threat). Simon, along with the other Terra Indigine and some of the more astute humans like Burke and Monty, recognize that the fate of all humankind depends on what happens in Lakeside. This sets up a number of situations that endanger the lives and wellbeing of many of the Lakeside Courtyard residents, weaving a sense of urgency around the moments of everyday living.

Like all the previous books in the series, readers (listeners) are privy to an unpleasant series of events that unfold over the course of Etched in Bone and witness how the Terra Indigine react. Although is it evident where the story is headed, it’s still gripping. This time around, I liked how well the Others and humans worked together, but I also like that the Lakeside residents are now able to recognize a human predator. The introduction of Monty’s mother, Twyla, adds a missing human/pack grandmother component. She is able to understand the ways of the the Others and put her own way of handling a situation into their framework. Her presence is calming, knowing that she is able to handle the craziness with a firm but caring hand.

Additionally, Etched in Bone progresses the unique relationship between Simon and Meg. By now, it is evident to all, expect Simon and Meg, that the pair are in love. Because love between a human and Other hasn’t existed before, and due to Meg’s abusive history, the couple’s dilemmas are different than expected. I absolutely love that Simon gets advice on how to navigate his relationship with Meg through “kissy books!”

After messing with the speed over the course of the series, the narration works best for me at 1.25x speed, and I will freely admit that I am now a huge fan of Ms. Harris’s performance in the series. I’ve grown to love every voice Ms. Harris performs, each as familiar as the characters themselves. The narrator continues to keep the joy and nativity of Meg, and the gruff predator of Simon. She nails the creep factor of mooch Jimmy, the whine of Jimmy’s wife, and the confidence of Burke and Kowalski.

Etched in Bone is another wonderful story in The Others series. The characters have grown so much, and I adore all the Courtyard residents. I’ve come to think of them as friends and have such an interest in seeing them succeed. I loved just listening to the day-to-day details and life of the Lakeside Courtyard, along with the new experiences for Meg, the Others, the Elders, and everyone in the mixed community. The author ended the series with many (if not all) of the outstanding details wrapped up, yet not completely finalized. After finishing Etched in Bone, I am hopeful for the future of the people/creatures of this interesting world (and really want more!).

After a human uprising was brutally put down by the Elders—a primitive and lethal form of the Others—the few cities left under human control are far-flung. And the people within them now know to fear the no-man’s-land beyond their borders—and the darkness…

As some communities struggle to rebuild, Lakeside Courtyard has emerged relatively unscathed, though Simon Wolfgard, its wolf shifter leader, and blood prophet Meg Corbyn must work with the human pack to maintain the fragile peace. But all their efforts are threatened when Lieutenant Montgomery’s shady brother arrives, looking for a free ride and easy pickings.

With the humans on guard against one of their own, tensions rise, drawing the attention of the Elders, who are curious about the effect such an insignificant predator can have on a pack. But Meg knows the dangers, for she has seen in the cards how it will all end—with her standing beside a grave.